City Officials Looking Out for Developers Who Fund Their Campaigns

I’m proud to be the publisher of Irvine Community News & Views — Irvine’s only independent community newspaper, free from developer control.

I’m a retired businessman and lawyer, who served on Irvine’s Planning Commission and was also Chair of the Irvine Transportation Commission.

The job of a Planning or Transportation Commissioner is to protect Irvine residents, looking out for their best interests.  Commissioners are supposed to be regulating developers, making sure that the City is following good planning principles before building permits are issued, and ensuring that proposed development projects do not negatively impact our City’s traffic.

Instead of protecting Irvine residents, Planning Commissioner Anthony Kuo and Transportation Commissioner Carrie O’Malley have spent the past two years rubber-stamping every development project that comes their way, regardless of how the projects impact Irvine residents.

In addition to approving thousands of new apartment units, they both supported Mayor Wagner’s landswap-and-development scheme with mega-developer FivePoint (Measure B). They actually said that adding 10,000 more cars & trucks to Irvine streets every day would not adversely impact traffic.

Now that they are running for Council, Kuo and O’Malley have joined Wagner in outsourcing their campaigns to developer FivePoint. FivePoint and their shadow committees are paying for street signs, TV ads, Facebook videos and campaign mailers, peddling outright lies about Wagner and his team “blocking development” and “fixing traffic.”

Ask yourself this: Has YOUR commute gotten better since Wagner became Mayor and Kuo and O’Malley became Commissioners? 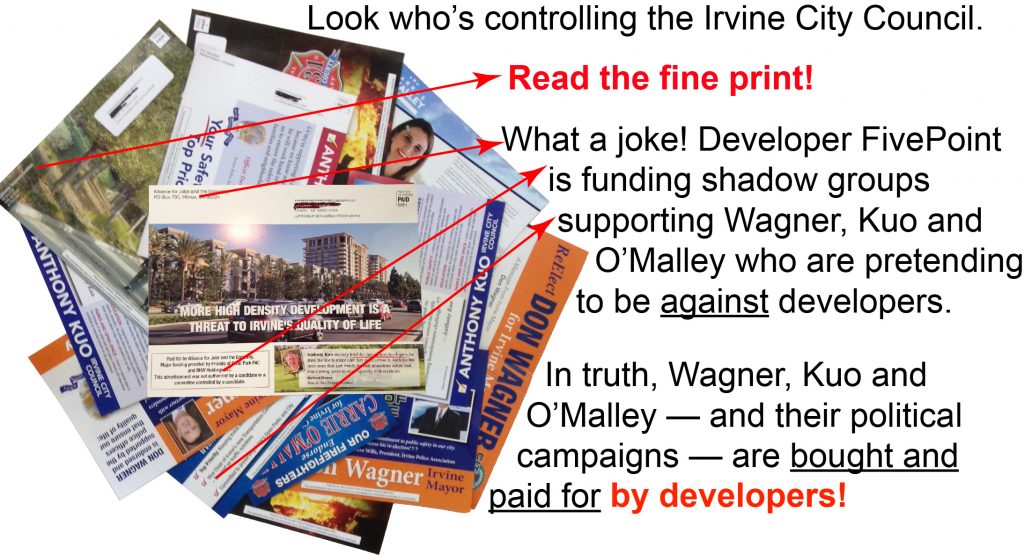 I know the difference between clean politics and corrupt politics.  Having a developer fund your political campaign at the same time you are supposed to be regulating developers is corrupt politics, plain and simple.

Our job at Irvine Community News & Views is to report on what’s happening in our City and to spotlight corruption when we see it.  Well folks, there’s political corruption at City Hall — and Wagner and his team are part of it.

So, what can be done about it?  On November 6th, Irvine voters can demand change by rejecting Wagner, Kuo and O’Malley.

Your vote is your voice. I urge you to use it!