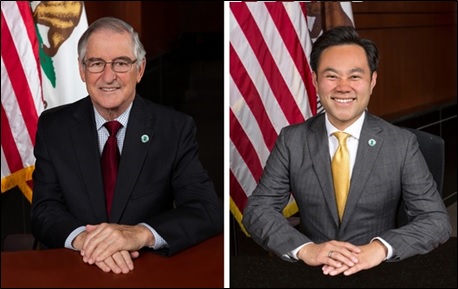 As the founding publisher of Irvine Community News & Views, I have been privileged for 8 years to write my “Publisher’s Perspective” column — weighing-in on Irvine civic affairs.  With election season now upon us, I want to provide our readers with my initial review of the candidates and issues at the forefront of our City’s November 8th election.

Irvine has a 5-member City Council. Three of the five are seeking re-election this fall. Mayor Farrah Khan is running for a second 2-year term, and Councilmembers Anthony Kuo and Larry Agran are seeking election to a 4-year Council term.  I’ll have plenty to say about the Mayor’s race soon, but for now, I want to offer my “publisher’s perspective” on the Council race.

Councilman Anthony Kuo and Councilman Larry Agran both have years of local governing experience. Of course, both are now Councilmembers on the same City Council, sitting at the same dais. In fact, they are seated next to each other. But the commonalities stop right there. On the central issues of this campaign, Agran and Kuo couldn’t be more different.

Let’s take a look into their records on four critical issues facing our City:

Since joining the Council in December 2020, Councilman Larry Agran has been sounding the alarm about OCPA, pointing to the agency’s incompetence and the fact that Irvine ratepayers are being forced to pay higher rates for the same electricity that SCE provides. (For nearly a year, Kuo blocked Agran’s repeated requests for a public discussion regarding OCPA.)

Veterans Memorial Park at the Great Park
Since 2014, Agran has been the chief proponent and champion of the Veterans Memorial Park — that’s the Irvine voter-approved initiative that dedicated 125 acres of the 1,300-acre Great Park to honor the service and sacrifice of veterans and their families. Kuo has time and again chosen to defy the will of the people by working to delay and defeat this popular project.

All American Asphalt
This industrial asphalt plant, located in our City’s northern open space, is the biggest polluter in Irvine.  The toxic emissions from the plant have become a clear and present danger to the residents of north Irvine and beyond.

For years, Agran — an environmental defense lawyer and policymaker — has advocated on behalf of the residents, calling for aggressive legal action by the City to shut down the plant and relocate it outside of Irvine.

On the contrary, Kuo has been unsympathetic to residents affected by the toxic emissions. In fact, Kuo told the Voice of OC in September 2021, “I think in the eyes of some residents nothing we do will ever satisfy them absent shutting down the plant, which the City’s position is we’re not in a position to do that.” Within months, Agran was able to prove Kuo wrong. The City is now in discussions to close the plant.

District Elections
Councilman Agran has been a long-time proponent of transitioning to a system of “district” elections — so that every part of Irvine has its own elected Councilmember, ensuring fairer City Council representation for all.

Councilman Kuo has repeatedly blocked these efforts, and on July 26th voted against Agran’s motion to put the matter on the November 8th ballot for Irvine voters to decide.

A Final Note: In addition to these four critical issues, Agran and Kuo could not be more different in how they finance their political campaigns. Kuo’s list of donors reads like a Who’s Who of special interest groups in Irvine (massive real estate developers, car dealerships, investment firms, utility companies, and insurance agencies). On the other hand, Agran has always relied on hundreds of small-dollar donations from Irvine residents to fuel his grassroots campaigns. Next time, I will take a look at others in the race for City Council.