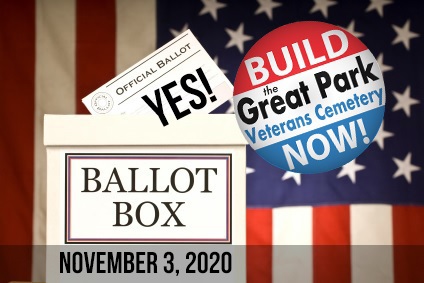 On Wednesday (April 29th), the Orange County Registrar of Voters notified the City of Irvine that the Build the Great Park Veterans Cemetery initiative has qualified for the November 2020 ballot.

If the citizens’ initiative is passed by Irvine voters later this fall, the City-owned 125-acre “ARDA” site on the former El Toro Marine Corps Air Station at the Great Park will be rezoned exclusively for a Veterans Memorial Park & Cemetery.

The initiative qualified for the ballot thanks to an amazing all-volunteer team, consisting of hundreds of Irvine citizens who worked tirelessly for months to gather 19,790 signatures from Irvine residents — far more than the 12,888 registered voter signatures required by State law.

This marks the second time in two years that Irvine residents have been forced to organize a campaign effort in order to stop the City Council from moving the Veterans Cemetery to an alternate location.  Measure B, a ballot referendum proposing a land-swap scheme with mega-developer FivePoint, was soundly defeated by Irvine voters in 2018 — 63% to 37%.

Ignoring the results of the 2018 election, unelected Mayor Christina Shea has continued to work as a shill for FivePoint in a blatant attempt to hand the ARDA site over to the developer for massive construction projects.  Shea was caught on video last summer bragging about her latest scheme to stop the State from beginning construction of the Veterans Memorial Park & Cemetery at the ARDA site.

Shea has stated that she wants the City Council to put a competing measure on the November ballot to defeat the citizens’ initiative — without gathering a single signature from Irvine residents.

To learn more about the Build the Great Park Veterans Cemetery citizens’ campaign and how you can help, click here.