Campaign to Save the Veterans Cemetery Turns in Over 19,000 Signatures

The signature gathering effort to qualify the official Referendum to Save the Veterans Cemetery in the Great Park appears to have won the first critical battle. 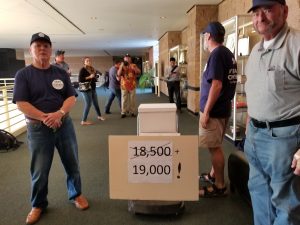 Ed Pope (left) delivering 19,140 Irvine voters’ signatures on a Referendum Petition to the City Clerk in City Hall on Thursday afternoon, November 9th. That petition will stop in its tracks the October 10th City Council’s 3-2 vote to rezone to commercial development 125 acres of the Great Park that had been previously approved by CalVet as a Veterans Cemetery. After verification of the signatures gathered, the next step will be to place that rezoning ordinance on the ballot, so all Irvine voters can have their say.

Given the short period of time and the aggressive actions taken by FivePoint Communities to interfere with and intimidate the volunteers, it is remarkable that they were able to gather so many signatures.

Irvine Community News & Views is proud to be a part of the effort to ensure Irvine voters have the chance to weigh in on this critical issue.

ICNV has been reporting on the Veterans Cemetery issue since June, when three members of the Irvine City Council (Mayor Donald Wagner and Councilmembers Christina Shea and Melissa Fox) stunned residents by voting to abandon more than three years of planning and all the State and Federal approvals for the Veterans Cemetery in the Great Park. They decided, instead, to transfer 125 acres of parkland to FivePoint Communities, along with a zone change ordinance that would permit FivePoint to put massive office and commercial developments on the property that was intended to be a beautiful Veterans Memorial Park and Cemetery within our Great Park.

We will continue to keep our readers updated on this important story.