Billion-Dollar-Developer FivePoint Is At It Again: Funding Another Deceptive Campaign! 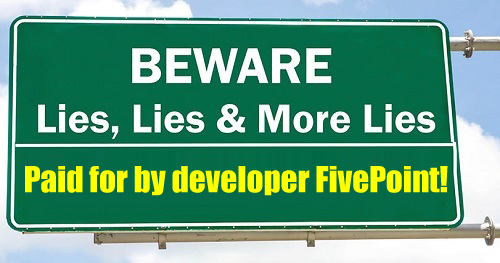 For years, giant land developer FivePoint has plotted and schemed in an effort to acquire the City-owned 125-acre site (“ARDA”) on the former El Toro Marine Corps Air Station in the Great Park that had been designed and approved for a State-built and State-operated Veterans Memorial Park & Cemetery.  FivePoint wants to build massive office, commercial and industrial projects on the ARDA site — projected to put an additional 10,000 cars and trucks onto Irvine streets every day.

In 2017-2018, Irvine residents organized the “Build the Great Park Veterans Cemetery” citizens’ committee to stop a FivePoint-funded ballot measure that would have handed FivePoint the ARDA site.  To push their ballot measure through, FivePoint established and bankrolled a PAC (“VALOR”) with an initial money-drop of $600,000!  VALOR was used as FivePoint’s tool for spreading lies and attacking the citizens’ committee.

In June 2018, a 63.7% majority of Irvine voters rejected the FivePoint-VALOR campaign of lies and deception, defeating the developer-funded ballot measure scheme (Measure B).

Mayor Christina Shea (who has taken more than $100,000 in dark money campaign support from FivePoint) has completely ignored the results of the 2018 election. Shea has become a shill for FivePoint’s massive development plans and was even caught on video last year telling Great Park homeowners that she had come up with an alternative “Golf Course” site as a “diversion tactic” to stop the State from building the Veterans Memorial Park & Cemetery at the “ARDA” site.  (Click here to watch the video.)

For months now, the all-volunteer team at the “Build the Great Park Veterans Cemetery” committee has worked tirelessly to gather the 15,000 signatures necessary to qualify their own ballot initiative — a citizens’ initiative that would designate the ARDA site as the once-and-for-all citizens’ choice for the Veterans Cemetery so that the State can begin construction this year.

Now that the citizens’ committee is completing the signature-gathering process, FivePoint has launched a new series of TV commercials — costing hundreds of thousands of dollars — again using FivePoint’s VALOR PAC and other dark money committees in a desperate attempt to crush the citizens’ initiative effort.

If you have not already signed the “Build the Great Park Veterans Cemetery” initiative petition, do so and encourage your friends and neighbors to join you.