Beginning last spring, Irvine mega-developer FivePoint Communities made clear its determination to elect its own pro-developer candidates to control the Irvine City Council.

FivePoint assembled its “team” of candidates that included termed-out State Assemblyman Donald Wagner, running for Mayor, and longtime Councilmember Christina Shea and Planning Commissioner Anthony Kuo, both running for Council.  According to sources close to the FivePoint organization, Wagner, Shea and Kuo were regarded as “reliable YES votes and cheerleaders for FivePoint’s fast-growth agenda.”

No Limits on Spending

For FivePoint, there were apparently no limits on what they were prepared to spend to elect the “right” candidates, who would advance their growth-and-development  interests, and dramatically boost their profits.  With a new, pro-developer majority, FivePoint could expect City Council approval of land-use and zone changes to build yet thousands more houses and apartments in Irvine. 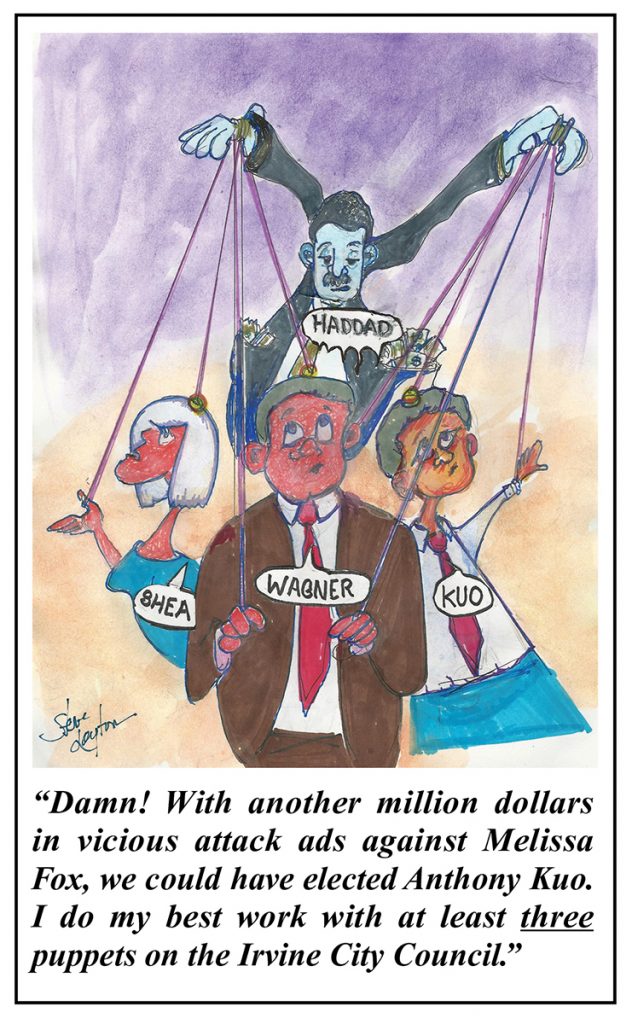 By Election Day, FivePoint and other developers spent a record-breaking $1.5 million — most of it in hard-to-trace “dark money” and “gray money” — flowing through layers of out-of-town political committees.  These committees, in turn, spent more than $100,000 per week in Irvine — most of it on vicious smears and lies aired on TV, radio, and in online and direct-mail attack ads.  These ads targeted grassroots, growth-control candidates Mary Ann Gaido, running for Mayor, and Melissa Fox, who was running for City Council.

Commenting on her victory, Fox said, “I am grateful to the voters for selecting me to serve the residents of Irvine for the next four years.  But, I was appalled at how ugly and personal the election campaign became. The lies and smears used by FivePoint and other developers against me and other Council candidates, and especially against Mayoral candidate Mary Ann Gaido, were disgraceful.  Irvine deserves better.” 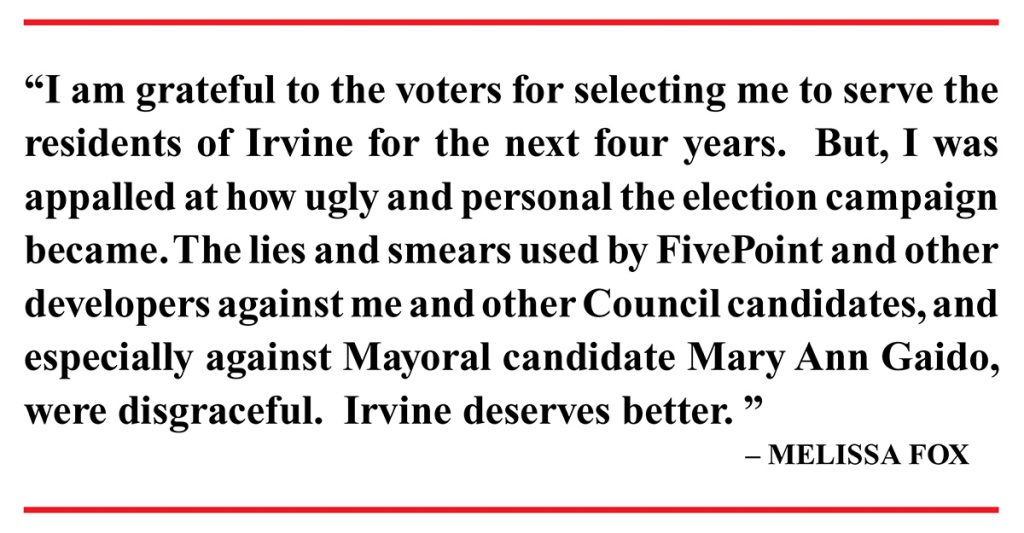 Following the scheduled December 13th swearing-in of Donald Wagner as Mayor, and Christina Shea and Melissa Fox as Councilmembers, the newly constituted five-member City Council is expected to get down to work in January.  It remains to be seen if the Mayor and Council will address the widespread resident anger regarding the City’s  growth-and-development policies — the fast-growth policies that have produced the city-wide traffic nightmare which has been eroding Irvine’s quality of life, hurting property values, and damaging the City’s reputation for good planning.

According to Council watchers, another test of the new City Council’s resolve on growth-and-development issues will likely come in early 2017.  Will the new Council yet again reaffirm the City’s 2014 and 2016 dedication of 125 acres of land in the Great Park for a Southern California Veterans Memorial Park and Cemetery?  Or will Shea, joined by Wagner, once again lead a fight to derail the Veterans Cemetery at the Great Park in favor of FivePoint’s “land-swap” proposal?

This land-swap, which has been derided by former Irvine Mayor and Councilmember Larry Agran as a “land swindle at the expense of Orange County veterans,” was promoted by Shea, Wagner, and Kuo last spring at the behest of FivePoint’s President and CEO, Emile Haddad.  The proposal calls upon the City Council to move the planned 125-acre Veterans Cemetery out of the Great Park and re-zone the 125 acres and other nearby land so FivePoint can build as many as 10,000 additional houses, condominiums and apartments at the Great Park.  According to experts, this kind of entitlement giveaway would likely result in an added $1 billion in windfall profits for Haddad and FivePoint’s investors.

Councilmembers Jeff Lalloway and Lynn Schott have previously held firm in their support for a Veterans Cemetery on the 125-acre parcel of land within the Great Park.  In the past, Melissa Fox has been strong in her support as well.  If the three — Councilmembers Lalloway, Schott, and Fox — demonstrate solidarity on the Veterans Cemetery, it could signal the emergence of a Council working majority on this and other important land-use and development issues.