Before You Vote, Learn Where the Candidates Stand on the Issues

By now, you should have received your vote-by-mail ballot. Here at Irvine Community News & Views (ICNV), we encourage you to complete your ballot and drop it off at one of the Ballot Drop Boxes in Irvine, or in the U.S. mail (no stamp is required).

If you prefer voting in-person, there will be 14 official Vote Centers open this weekend. (If you are not registered to vote, you can register and vote at the same time at any Vote Center.) For a list of Vote Centers, click here.

Don’t stop at the top! Too many voters only vote for candidates at the top of the ballot. But, our quality of life here in Irvine is determined largely by the candidates toward the bottom of the ballot. What impacts our daily lives is the quality and character of the Mayor and Councilmembers we elect … and the governing leadership they provide.

Where do the candidates for City office stand on the leading issues? What promises have they made … and kept … or broken? Are they leaders we can trust to listen to the City’s residents and implement the will of the voters?

Based on their voting records, responses to the ICNV candidate questionnaire, and interviews I have conducted, our ICNV staff has prepared an Irvine Issues 2022 Chart for the leading candidates running for Mayor and City Council: 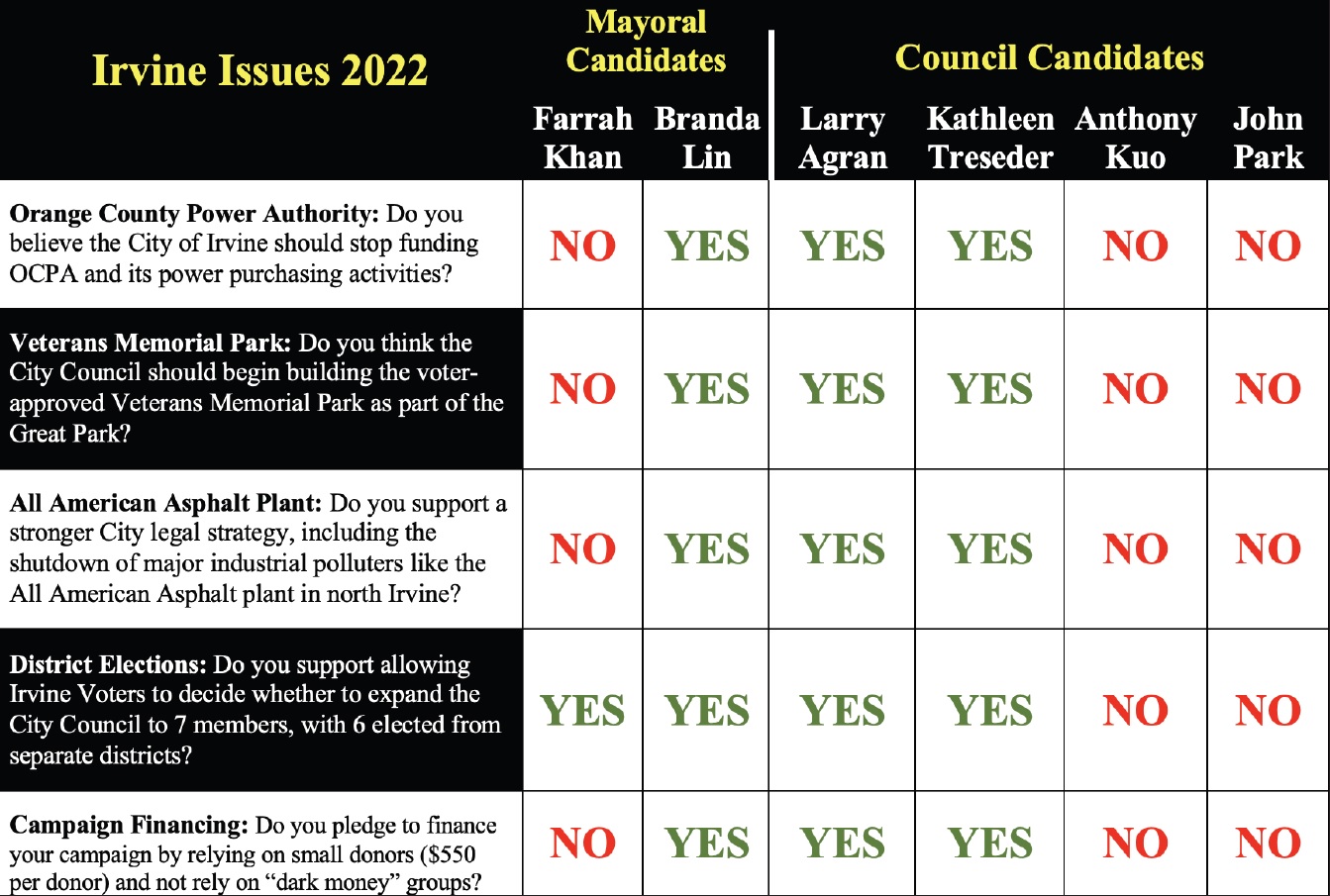 Our chart includes the two leading candidates for Mayor: the incumbent, Farrah Khan, who is seeking re-election; and community activist Branda Lin. (ICNV has endorsed Branda Lin for Irvine Mayor.)

On the Council side, there are six candidates running for two seats. (Every voter can vote for two candidates.) We have already endorsed Larry Agran for re-election to his Council seat. Among the other candidates vying for the second Council seat, UCI Professor of Biology, Kathleen Treseder, shares the pro-resident views held by Branda Lin and Larry Agran.

On the other hand, Anthony Kuo and John Park consistently side with special interests and big developers on the issues that are so important to our quality of life here in Irvine.  Kuo and Park are relying on more than $500,000 from big special interests in support of their campaigns … and in vicious attack mailers against Councilman Agran — more than a dozen of them! — filled with gross misrepresentations and outright lies.

The issue that seems to anger Irvine voters most in this election cycle is the fiasco happening at the Orange County Power Authority (OCPA).

Since joining the Council in December 2020, Councilman Agran has been sounding the alarm about OCPA, pointing to the agency’s incompetence and corruption, and the fact that Irvine ratepayers are being forced to pay higher rates for the same electricity that SCE provides. (For nearly a year, Khan and Kuo blocked Agran’s repeated requests for a public discussion regarding OCPA.)