An Unlikely Friendship is Formed in the Midst of the Pandemic 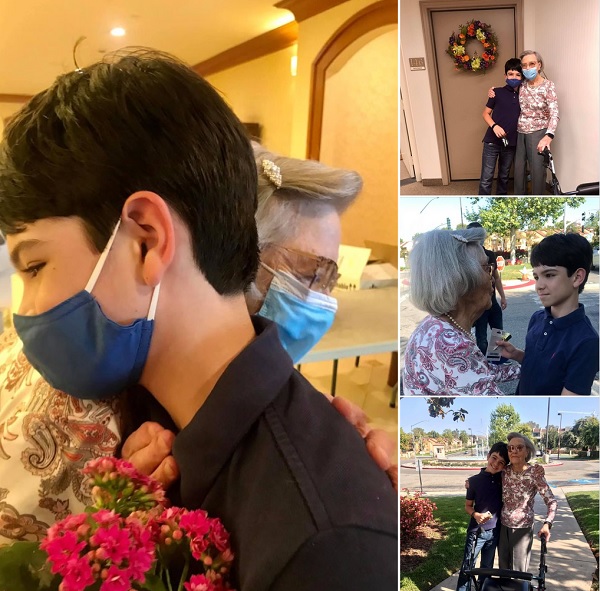 Although the COVID-19 pandemic has impacted all of our lives, this past year has been especially difficult for seniors who have been stuck at home, alone.

To help provide encouragement and hope, lots of our Irvine neighbors have created cheerful cards and letters that they dropped off at local senior living communities. Senior services staff have reported that those cards and letters have been tremendously impactful.

Irvine Community News & Views has learned about one young letter-writer who has spent the past 15 months forming an unlikely friendship with his pen pal at Regents Point senior living community.

In January 2020, 89-year-old Bea Baker lost her husband, Carl, after nearly 70 years of marriage. Having been Carl’s caregiver for many years, Bea suddenly found herself very much alone. To help fill the hours, she began visiting residents in the skilled nursing section at Regents Point every day, sometimes in the morning and afternoon.

However, by mid-March, the State’s Shelter at Home order forced Bea to remain inside her apartment, and her daily visits to the health center were canceled.

Then something magical happened! A pen pal program was established by a junior at University High School in late March, which randomly paired Regents Point residents with local students. Bea was paired with 11-year-old Julian Abazajian who attends Westpark Elementary School.

For more than a year, the pen pals have nurtured an unlikely friendship through 40-plus letters focused on family, pets and shared admiration. Bea says that Julian keeps her updated on what’s going on in his life and what he’s been doing. He often sends her artwork, recent school results, and photos of his dog and cat, who coincidentally is also named Bea.

After 15 months of correspondence, Julian and his parents were able to meet with Bea in person at Regents Point. The group quickly felt like old friends and plan to remain connected.

We at Irvine Community News & Views want to thank Bea and Julian for sharing their story … and for reminding us all how important it is to reach out and connect with others.