A Year After the City Rezoned the ARDA Site Exclusively for the Veterans Memorial Park, Will the Council Finally Move Forward?

Five years ago, the 125-acre ARDA site at the Great Park had been planned, designed, and approved by the State for a Veterans Memorial Park & Cemetery. Project construction was about to begin. That’s when Irvine land developer FivePoint intervened with their own plan — a backroom political deal to block construction on the ARDA site so that they could grab the multi-million-dollar property to build massive office, commercial, and industrial projects.

By 2017, developer-supported members of the Irvine City Council were hatching schemes with FivePoint to select a different site for the Veterans Memorial Park.

In 2018, Irvine voters overwhelmingly rejected a FivePoint-funded ballot measure (63% voted NO!) that would have replaced the proposed Veterans Memorial Park on the ARDA site with FivePoint’s development. 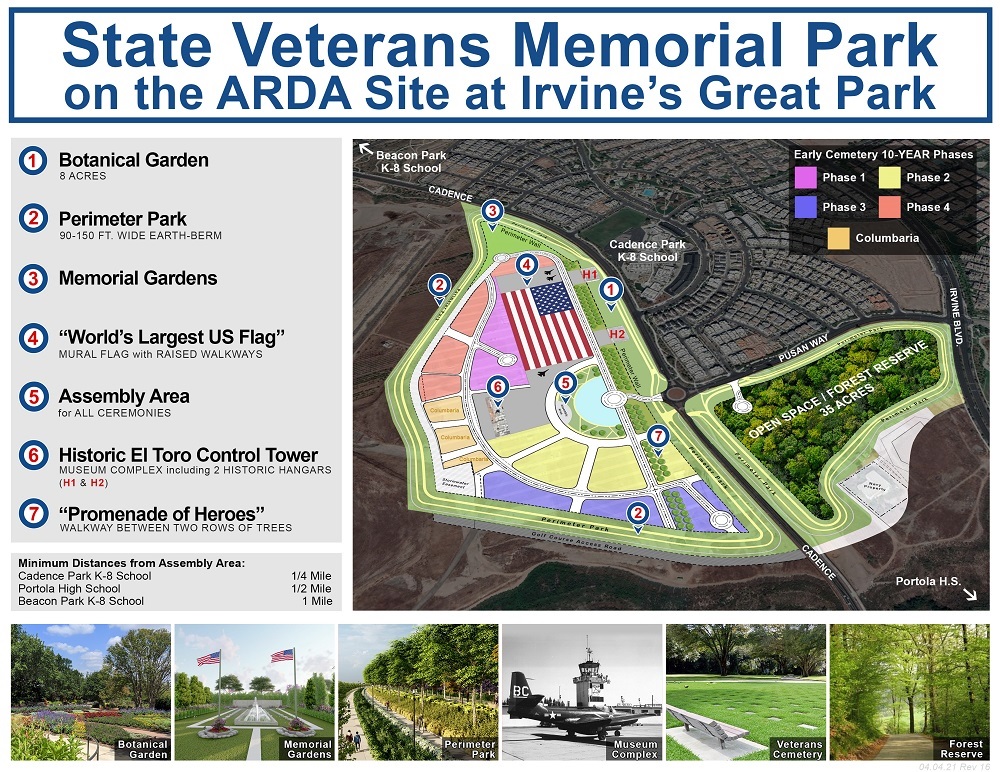 Irvine voters clearly supported moving ahead with the Veterans Memorial Park on the ARDA site. However, the Mayor and Council at that time refused to implement the will of the people after the 2018 election. This, in turn, caused 19,790 Irvine residents to sign an initiative petition designating the ARDA site as the one-and-only legally available location for a Veterans Memorial Park in the City of Irvine. In May 2020, then-Councilmember Farrah Khan and two of her Council colleagues (Anthony Kuo and Mike Carroll) voted to adopt the citizens’ initiative, making it the binding law of the City.

On June 4th, the California Department of Veterans Affairs (CalVet) released its own study comparing the ARDA site with yet another FivePoint-backed alternative site — the so-called “golf course” site.

The CalVet study confirmed what was expected: The baseline cost estimate for the Veterans Memorial Park at the 125-acre ARDA site is $63 million; while the estimated cost at the smaller 100-acre golf course site is $47 million. In both cases, the entirely State-funded project will cost around $500,000 per acre.

According to the latest communication from CalVet, State officials are asking for the City of Irvine to specify what site is available to be transferred to the State so construction can begin. The City’s answer should be a no-brainer. The citizens’ initiative that the Council adopted on May 12, 2020 states: “The People of Irvine enact this measure to instruct the City Council that the City’s residents prefer to locate the Southern California Veterans Cemetery on the ARDA site and not at any other location in the City.”