19,125 Residents Petition City Council To Say NO To Developer FivePoint

Twenty-two of the more than 100 Irvine volunteer Referendum signature gatherers showed up at City Hall on Thursday afternoon, November 9th.  They brought with them five boxes containing a record-breaking “18,500+” Referendum Petition signatures to stop developer FivePoint Communities from replacing the previously promised, planned and approved Veterans Cemetery in the Great Park, with massive office and commercial development.

Flanked by two dozen Irvine volunteers who gathered in the City Hall Plaza, Ed Pope, Chair of the Save the Veterans Cemetery Committee, took a moment to smile for a celebratory photo, and then spoke briefly and seriously about what he called the “power of direct democracy” in Irvine.

Pope, a U.S. Army veteran of the Cold War era and a resident of Irvine for the past 45 years, went on to explain the historic significance of the five boxes containing Veterans Cemetery Referendum Petitions with “18,500+” (actually 19,125!) signatures of Irvine residents.  The Petitions were about to be turned-in to the Irvine City Clerk for preliminary counting.

“Our Referendum Petition,” said Pope, “represents an historic test of whether the will of the people can overcome the lock-hold that developer FivePoint has on three members of the Irvine City Council.”

Pope, a retired, award-winning “High School Teacher of the Year,” noted that three members of the City Council — Mayor Donald Wagner and Councilmembers Christina Shea and Melissa Fox — “have, for months, been rubber-stamping the FivePoint scheme to replace the previously-approved Veterans Cemetery in the Great Park by transferring City ownership of the 125-acre site to FivePoint, along with zoning that would permit more than 800,000 square feet of office and commercial development on the land that was originally set aside for a Veterans Cemetery in 2014.”

“Now,” said Pope, “with our Referendum Petition, we are giving the voters of Irvine a chance to say NO to the wildly unpopular FivePoint land-grab, and to finally restore the Veterans Cemetery to its original site in the Great Park, where it belongs.”

According to State and City law, the City Clerk and the Orange County Registrar of Voters must determine that, of the record-breaking 19,125 Irvine residents who signed the Referendum Petition, at least 12,000 were registered Irvine voters at the time they signed. 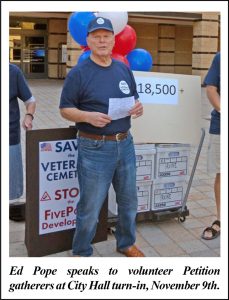 Once the count is certified, probably in mid-December, the matter is referred back to the Irvine City Council, which must then choose among three options.  The Council can: first, reconsider and repeal its previous unpopular action in support of the FivePoint zone change and development scheme; or, second, submit the citizen-led Referendum to Irvine voters to decide the issue at the next regular City election in November, 2018; or, third, call an earlier special election for the voters to decide, which would most likely be in April or June, 2018.

Coincidentally, on the same November 9th afternoon that Referendum Petitions bearing the signatures of 19,125 Irvine residents were turned-in to the City Clerk, a major environmental lawsuit was being filed in Orange County Superior Court, alleging that the Irvine City Council and FivePoint Communities had violated key provisions of the California Environmental Quality Act.

Specifically, the lawsuit claims that while taking action to replace the low-intensity, low-impact Veterans Cemetery in the Great Park with FivePoint’s high-density, high-impact office and commercial development, the City and FivePoint failed to analyze the adverse environmental impacts that the zone change and massive development will cause.

According to citizen-activist Harvey Liss, the lead plaintiff in the lawsuit, “FivePoint intends to replace the planned Great Park Veterans Cemetery with 812,000 square feet of office and commercial development, generating more than 8,400 daily auto and truck trips.  And yet FivePoint claims that there will be no adverse environmental impacts that require study, analysis, and full disclosure to the Irvine community.” 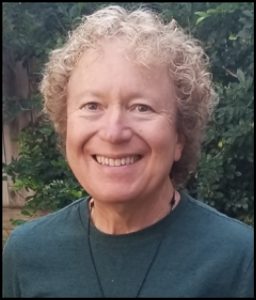 “That’s preposterous,” says Liss.  “Think of the traffic impacts, the noise, and the local air pollution along Irvine Boulevard, Sand Canyon and Jeffrey.  Think of the surrounding villages and communities in north Irvine — Woodbury, Cypress Village, Stonegate, Portola Springs, and FivePoint’s own Great Park Neighborhoods like Pavilion Park, Parasol Park, and Beacon Park.  These residents need to know that their quality of life is in jeopardy.”

Liss, a civil engineer and scientist who also writes for Irvine Community News & Views, asserted, “California environmental law is clear.  The City and FivePoint must study, analyze and disclose all major, adverse environmental impacts before plunging ahead with massive new development.”  Liss added, “FivePoint and our rubber-stamp City Council failed to do that.  This lawsuit is about compelling them to do what the law requires.”