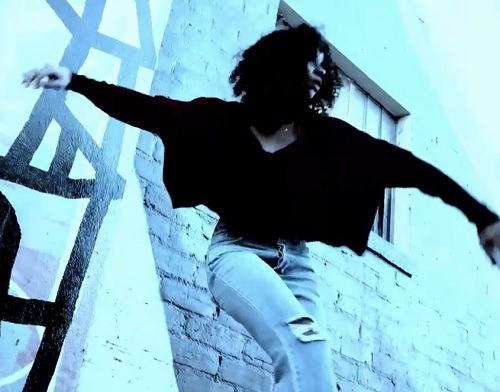 UCI Professor Lisa Naugle, who served as Artistic Director for the event, provided an introduction, explaining that each composition was pre-recorded on Zoom and simultaneously live-streamed with (video of) live dancers — from various locations.  It was truly a pandemic performance since the dancers, not in studios, forced to be separated, were trapped at home.

The production crew mixed the live and pre-recorded material, added music, and then uploaded it on Vimeo for the performance that we in the audience watched.  The technical combinations were seamless.  A new dimension for both the dancers and the audience.  Which scenes were pre-recorded, and which were live?  There was no way to tell.

Taking an unusual “seat in the audience,” in front of my PC at home, I was surprisingly delighted by this very unique spectacle!

Choreographed by UCI’s Clare Trevor School of the Arts grad students, there were 12 pieces in all. 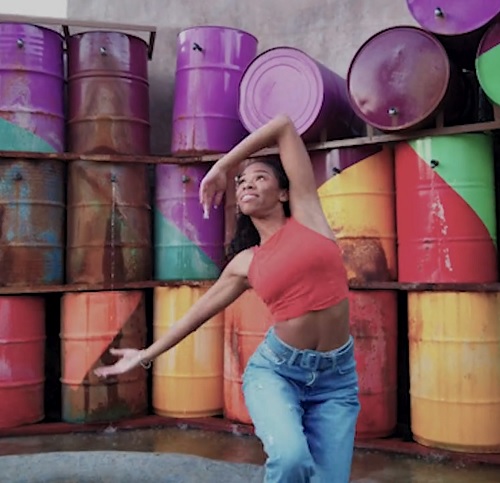 (First a disclaimer: each piece was highly deserving of praise.  However, given the limits of my memory, I’m only able to highlight the pieces that jumped off the screen for me that I can still see in my mind.)  They were pure visual confections.

The opening piece, “Dreamscape,” choreographed by Tamer Aldo with five dancers really spoke to our times: isolation.  Tamer presented scenes of one dancer at a time, with some video overlapping.  Dancers were mostly shown in their own apartments — the dancer rising from bed, in the kitchen, at the front door, exercising.  No one else around.  It made me yearn for them to simply open the door and greet a friend.  Dance with someone else.  Not today.

“Elev8,” created by Beverley Jane Bautista featured 8 dancers, each placed in outdoor settings — a street, a plaza.  With the magic of her video editing, she displayed dancers from a variety of locations, combined virtually on a composite video stage.  This performance was even more intriguing because I was able to recognize some of the outdoor settings she chose. 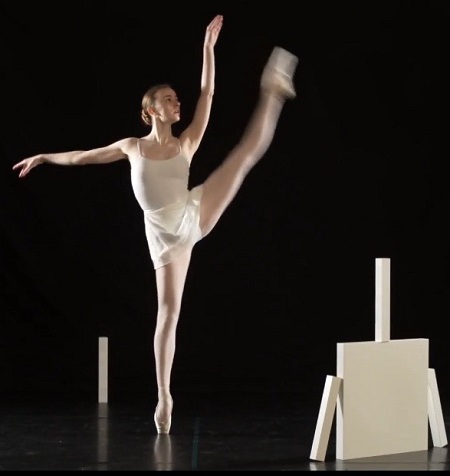 Dance teaches us that art can emerge spontaneously almost anywhere.  This stuck me while enjoying “Amico di Penna.” by Ashley L. Jones.  Ashley and one other dancer performed an ingeniously contrived tap dance.  All in B & W, with most frames showing the dancer only from their hips down.  And the settings were eye-fetching in that, unlike a stage, you follow the dancers while their feet play over street pavement, plazas with their masonry walls, stairs, and even beaches.  Places where we all are.

Brandye Lee’s “Fresh on Me” tried to convey forgiveness and I think she got there.  A solo dancer, Malia Dizon, in a wonderful yellow dress, frolicking on lawns and amongst fall-decorated leaves.  The musical accompaniment was a knock-out rendition of “Amazing Grace” by Frederic Yonnet on harmonica.  That piece is part of my musical library now. 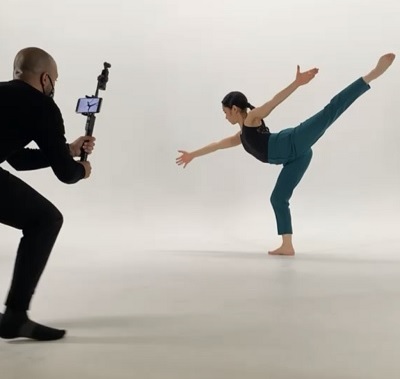 This brings me to an observation:  Though broadcast via Vimeo, the New Slate Online, was not a “canned” event.  It was a live performance in many ways.  The new technologies that were used for this program will be extended to the next event, “Dance Visions,” which is scheduled for February.  (I have provided a link below.)

Milena, using primarily classical ballet moves while wearing a white leotard, ballet skirt and toe shoes, danced in a completely featureless black void.  No details anywhere, except for Milena and her silent partner.  A small white square table: four legs and a top.  She used this essentially in mime.  Stella’s piece was altogether captivating.  It felt like a wind-up music box doll had come to life.

Through “Fresh Eyes,” Marc Spalding was able to float his 7 dancers, one at a time, in a featureless, pure white cloud of a stage.  As in a dream, dancers overlapped and merged effortlessly from one scene to the next.  Images you simply can’t create on a live stage. 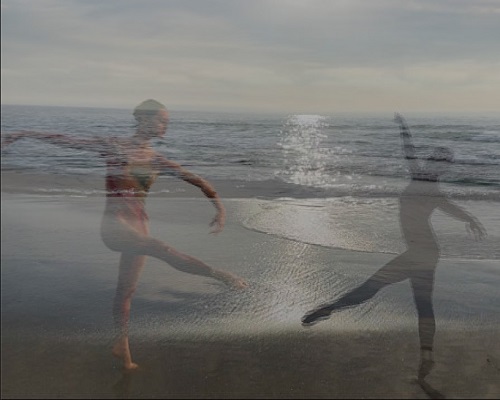 “One” by Brittany Woo

“One” by Brittany N. Woo, arranged 10 dancers in separate settings from beaches to parks, with a haunting contemporary music background by Peter Colclasure.  Displaying these dancers on separate Zoom screens, sometimes overlapping, they skillfully suggested performances that we would typically see on a live stage.

The last piece, “Imbue,” was a killer.  It was created by Whitney Schmanski who worked with three separate solo dancers.  Most of us know what a painting by Jackson Pollack looks like.  Whitney’s canvas was her own concrete driveway, splashed with a sheet of water.  The brush?  Modern dancers and a lot — and  I mean a lot — of sidewalk chalk (300 pieces). 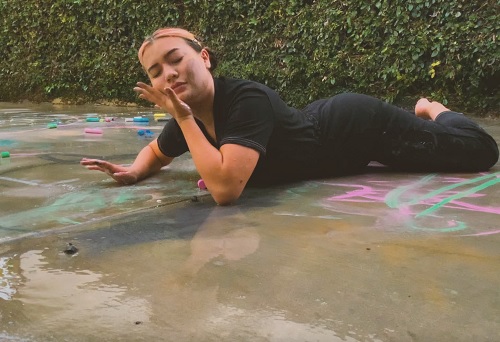 Using their feet, hands, arms, costumes, the dancers were able to create in real time, a large Jackson Pollack watercolor, on the pavement.  With dance move after dance move, the image would emerge, wash away between scenes, and then re-emerge.  Using water, dance and chalk painting, combined with skillful image editing, this performance couldn’t happen on a live stage.  It made you want to play like a child.

Ingeniously directed, the Claire Trevor School of the Arts Dance Department — using the skills and tools they’ve aligned during the limitations of 2020 — have been able to successfully move the dance media ahead: online and with a distant audience.

In a live theatre, seats beyond the first few rows don’t get a closeup view of the dancers.  New Slate Online was able to put the stage in our lap.

What’s most amazing to me is the fact that each choreographer, working with dancers, not in a studio, but located across the country and internationally, had to deliver an original dance composition.  They also had to master video editing skills.

For their breakthrough technical wizardry, John Crawford, Virtual Studio Director, had to write the software which combined live dancers with pre-recorded material, and then broadcast the final results, with music, on Vimeo.

As far as I could see, the entire performance went off without any flaws.  On a real stage, John and his technical team would deserve a standing ovation!

I’ve enjoyed TV for a long time.  We’re all too used to watching it.  I won’t give you a date, but when my family purchased our first Black & White 10” console TV, the technology did not exist to even capture reruns.  New Slate Online was a universe away from those days.  Honestly, this performance felt like a universe away from what was available just last year.  A new dimension.  A step ahead.