I recently had the opportunity to see Your Ocean, My Ocean (YOMO/Intermedia) at UCI’s xMPL theatre.  The production was an experimental performance feast, combining beautiful dance sequences with music, media and visual art.

For four evenings and one matinee, John Crawford, Director and Media Designer — along with a team of 17 directorial and managerial associates, 17 dancers, 18 video performers, and 18 technical assistants — presented something quite spectacular!

YOMO/Intermedia is part of a bi-coastal collaboration connecting faculty and students from Rhode Island School of Design RISD and UCI’s Claire Trevor School of the Arts. YOMO includes contributions from Professor Kyna Leski’s students in the Architecture program at RISD.

The performance project is a call to action to save our oceans and coastlines, highlighting the need for environmentalism, climate justice and community engagement.  How that message is conveyed through dance, music, and multi-media is what makes it unique…and so enjoyable. 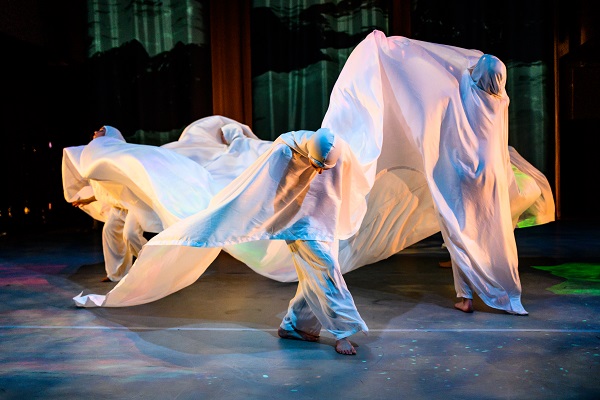 THE PROLOGUE
The performance begins with sounds and images of waves splashing over a rocky shore with a few short vocals.

Five dancers work with a large white silk sheet that is initially draped at the back of the stage.  One dancer peeks through at floor level, followed by one from each side, until eventually all five dancers — each wearing a hood sewn into the sheet making it one enormous costume — begin twirling, billowing and floating to become white waves.  After creating the large bubbles that froth at the narrow tongue of a wave as it seethes up and then recedes back down a sandy beach, the dancing waves evaporate while their bubbles remain behind for a moment on the sand, before the scurrying wind makes them disappear.  Seated in the front row, I found myself tucking my feet back to be certain that a lip of wave hadn’t washed beneath me. 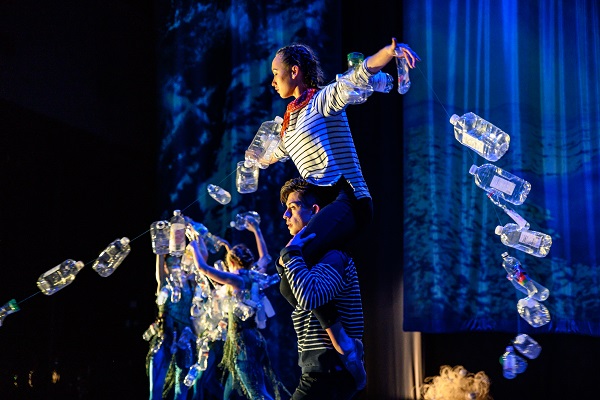 SEA NYMPHS AND BEACH LITTER
The second dance sequence starts underwater, as sea nymphs sway and frolic among projections of towering kelp strands.  Two dancers costumed as Venetian gondoliers join the other dancers .  Strewn about the edges of the stage is the litter of hundreds of empty plastic water bottles, strung together in long garlands, which the dancers drape around themselves.  As the dancers twirl together on stage, the bottles begin to clatter, becoming the real music for this dance sequence — it’s litter clatter.  It’s clearly a representation of the tons of thoughtless clutter accumulating on our beaches. 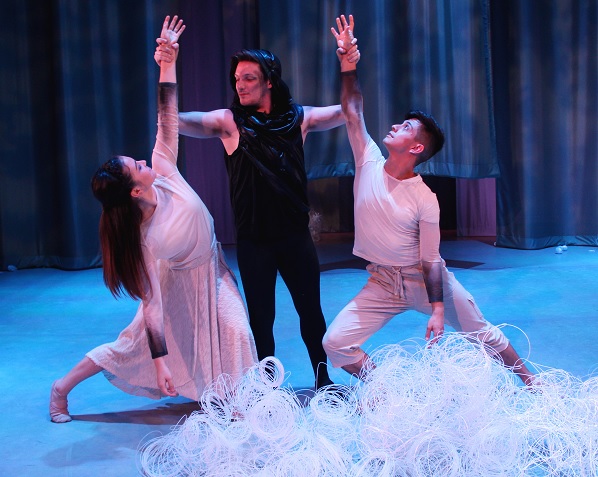 OIL SLICK
A male and female dancer begin the third dance sequence, dressed simply in beige or light grey.  As if on a date at the beach, they cavort without a care in the world before a male dancer slithers out from beneath the central curtain.  His Medusa-like cap drapes a coil of tendrils.  His cap and open sleeveless shirt are inked in reflective black.  Wriggling around the stage, he engages the couple.  At one point he adds a long cape, sweeping the stage behind him as he moves: shimmering, lustrous black, partially transparent, highlighted with small swirls of very deep lavender.   After he swirls around the pair, they become prone and he drags them to the front of the stage.  There, he enshrouds them in his cape and sweeps them off behind the curtains. The pair re-emerge, only now they’re smudged in soot.  This sequence had real punch. 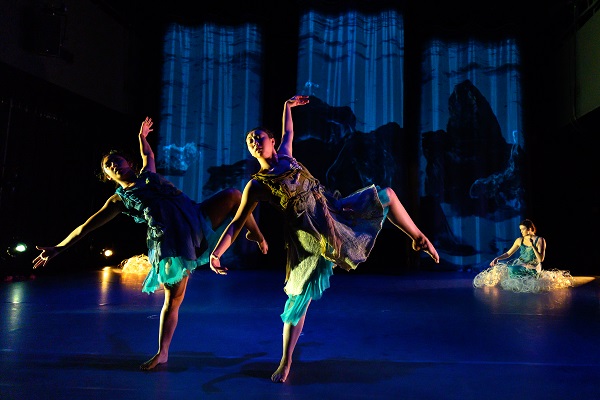 CLOSING SEQUENCE
During the closing sequence, dancers in turquoise and green use long coils of monofilament line as props.  First, they’re just coiled and spooled on stage, gradually draped around and between the dancers.  I got the sense that they had been discarded by some prior commercial fishing expedition.   Although the dancers’ movements are graceful, the overall effect is troubling.  The message behind this sequence is that our oceans are becoming a garbage dump.

MARI KIMURA & LIGHTING
Dance and media are accompanied by the composer and violinist, Mari Kimura.  Yet, to say Mari is “the” violinist is just too simplistic. Her performance is extended by her unique motion sensor that she is developing at UCI,  It’s called MUGIC™ and is used in combination with computer software.  I had the chance to speak with Mari after the show and she demonstrated how the whale songs materialize interactively with her bowing tracked by the MUGIC™ sensor.

Mari’s musical score ranged from melodic to sharp, organic throughout.  She played extemporaneously during the interstitial spaces between each dance.  At several points, Mari extends her playing into a one-woman string quartet using pre-recorded accompaniment.

At times, it sounded as though we were listening to Mari’s music while we were underwater.

The multi-channel video and lighting deserve special acknowledgement.  Their luxurious effects moved from one fantastic display to the next — projected onto the multi-layered curtain behind, on the floor, and on the dancers.  Wherever your gaze fell, your eyes were delighted.  During one intriguing sequence, images of the dancers were rebroadcast, in real time, onto the curtains.  We saw bold white-sketched outline figures against black.  The images were distorted to look like an old TV broadcast with the antenna tuned incorrectly.  Much of the lighting creativity displayed during the production belongs to the Lighting Designer, Morgan Embry.

As the performance ended, I thought about the two ancient masks in drama.   Comedy and tragedy.  YOMO is tragedy in dance and music. No words.  But you can’t avoid hearing the message.

My one complaint about the performance is that the venue (xMPL) has only 86 seats.  YOMO deserves to be seen by much, much larger audiences, and in more locations.  I was happy to hear that it will be presented at Brown University in April.

For those who haven’t attended an experimental performance project like this, I urge you to take a chance on one of these productions.  They’re like nothing you’ve seen before (and that’s a good thing).

For all upcoming events at UCI’s Clair Trevor School of the Arts, click here.

Although he is neither a musician nor a professional critic himself, Terry is a great admirer of the arts.   He's a self-described, "seat in the audience," who enjoys attending and promoting the immensely talented students and creative live entertainment events available at little to no cost to our community.

You can contact Terry by emailing him at terry.schilling@tug2go.com