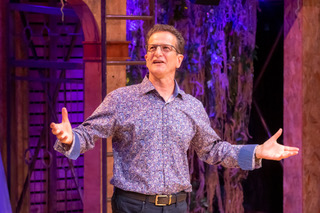 We have all been thirsting for images and dialog distinct from what’s flushing from our current insentient media portal. UCI’s Claire Trevor School of the Arts, like an ark, disembarks with something living: The west coast premiere of Rebecca Oaxaca Lays Down a Bunt (Rebecca).

I had the good fortune of recently meeting Eli Simon, the director and helmsman of this ark. Eli has been teaching drama at UCI for the past 34 years.

But, it isn’t drama that Eli is focused on right now. During our chat, he told me that “humor is what the world needs now more than ever.” He regards Rebecca as “a farce frothing with comedy.” The production takes place in a renovated hotel, The Hotelman Arms, in Chicago, where the motto is, “No privacy is the new privacy.” Like other comedies that take place at a hotel, this one centers around a cast of idiosyncratic guests and hotel staff. 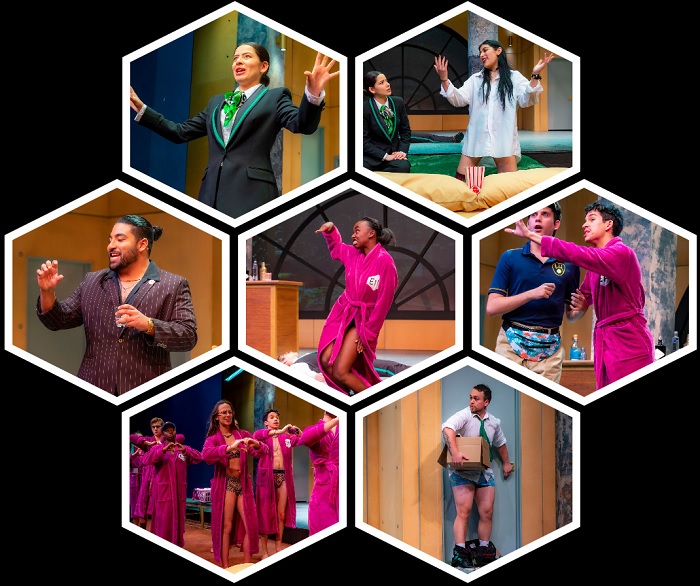 With a stage support crew of 30, ten actors make up the ensemble cast for Rebecca.

I’ve always wanted to learn what an ‘ensemble cast’ means. Eli defines it by saying, “We’ve woven a tapestry with these actors. It’s dependent on all of them pulling together in the same way. As an ensemble, there is no star vehicle. The star of the show is the ensemble. It’s a kind of all-for-one and one-for-all effort. For me, this is the best kind of theatre.”

Not all directors are as qualified as Eli to deliver on the promise of this farce with its fast and furiously paced dialog, which is dependent on split-second timing. But, Eli holds the title of “Chancellor’s Professor of Drama.” That title exemplifies a professor “who has demonstrated unusual academic merit and whose continued promise for scholarly achievement is unusually high.”

According to Eli, the play’s success hinges on the fact that the author of Rebecca, Kristoffer Diaz “has a really remarkable sense of humor.”

Rebecca was originally performed at the Goodman Theater in Chicago over a year ago. However, the script has been revised and polished through several subsequent productions along the way prior to this west coast premiere. Eli told me with great enthusiasm: “Nobody out here has ever heard of it or seen it, and that makes it particularly special!”

Eli observed: “As we emerge from the pandemic, there is a lot of talent focused on creating serious drama. We were looking for a contemporary comedy or farce, which meant we really had to look around.”

When I asked why he picked this particular production, Eli said: “This play just seems to celebrate coming out of the pandemic. Rather than anything out there on Zoom, come back to the theater and just have a really good time.”

I then asked Eli what makes directing a farce so interesting. As soon as I asked the question, I realized that I had touched on a favorite topic. Eli answered: “When you put a play like this on stage, with live actors, everything changes. You have to fine-tune it constantly. The way the lines are delivered. The tempo and timing. It’s not something you can hear when you are actually sitting at your computer.”

A way to appreciate Eli’s contribution to UCI’s drama program is to postulate: Given southern California’s gravitational pull for talent, if someone wanted to set out on a career in drama, why choose UCI? Eli rightfully boasted: “UCI is a destination campus. We have students working on Broadway, in movies, teaching drama all over the United States.”

Eli told me that UCI’s drama department typically includes about 300 undergraduate students. In addition, UCI receives around 700 applicants each year for its graduate program in acting. After submitting an audition along with a written application, UCI accepts … only 8 students.

When I asked if it was just talent he looked for during the application process, Eli’s response was expansive. He said: “Talent is not something that you can teach. We’re not looking for a particular kind of actor. We are looking for individuality. Any student with a desire to make artistic statements that are meaningful to them. We want each actor to know that they are enough, and if they acquire the techniques that we can teach them, they will have a better shot at expressing themselves in whatever they pursue … film, TV, or on stage.”

Fun fact: Eli has taught “The Art of Clowning” at UCI for over 30 years. You can glimpse this by selecting the link below. He continues to teach this class every year, leading troupes of clowns in Italy, China, and South Korea.

Part of what makes UCI a destination campus for students of drama is embodied in the breadth of ability, communication skills, talent and sincere enthusiasm found in UCI’s Chancellor Professor of Drama, Eli Simon.

Information about Rebecca Oaxaca Lays Down a Bunt

Upcoming events at UCI’s Claire Trevor School of the Arts

Eli Simon’s “The Art of Clowning”