The Other Irvine: The Irvine Business Complex

Note: This is the first of a three-part series on the Irvine Business Complex, or IBC, and the unique opportunities and challenges it offers those who work and live there … and to the City as a whole. 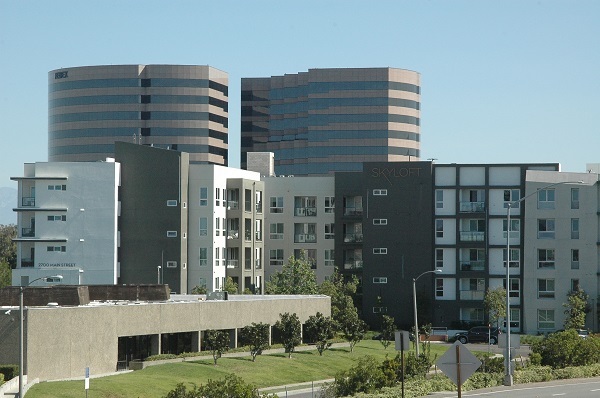 Driving up Jamboree Boulevard from Campus Drive, heading over the 405 Freeway and on to Alton and Barranca parkways, you pass residential towers or multicolored three-story condo and apartment complexes, each an enclave unto itself among the office towers, commercial business parks and warehouses.

You are in Irvine, but not the Irvine everyone thinks of when they hear the name. Most envision immaculate beige residential neighborhoods, the Irvine used to illustrate the dictionary’s definition of “suburban.”

That’s not the IBC. In this Irvine, residents live side-by-side with big corporations and tech start-ups, with online retail distribution centers and all manner of businesses large and small.

This is the Irvine Business Complex — the Other Irvine.

Ben Jacobs, 25, grew up in a quintessentially Irvine neighborhood, near Quail Hill. In December, the software engineer moved into the Watermarke complex near Jamboree and Campus. The single, young professional says he’s happy with his new surroundings.

“It’s a good community,” Jacobs said, adding that he likes “being around everything. … It’s very accessible, both in terms of freeway access and I can walk to stores and restaurants. In a suburban tract, there’s far less activity going on.”

The IBC is basically the western edge of Irvine. It is separated from the rest of the city by San Diego Creek and the San Joaquin Marsh on the east, with Campus Drive on the south, and the city limits on the west and north. It is bisected by the 405 Freeway, and the 55 Freeway runs along the western edge.

According to Irvine’s Community Development Department, there are currently 12,341 housing units in the IBC, with another 2,010 under construction and 1,468 approved for construction.

Demographic data for the IBC varies by source as it includes parts of three zip codes, parts of three school districts, and other complicating factors. Niche.com, which helps college students find schools and housing and draws its data from several sources, lists the IBC’s population at 16,226 and presents data showing they skew heavily college educated and renting, with a median household income of about $90,000.

Other sites have somewhat different numbers but paint much the same picture, with additional data indicating that IBC residents are predominantly in the 18-34 age range and have relatively few school-age children.

Niche.com notes that the IBC “offers residents a dense urban feel” and is home to “many young professionals.” 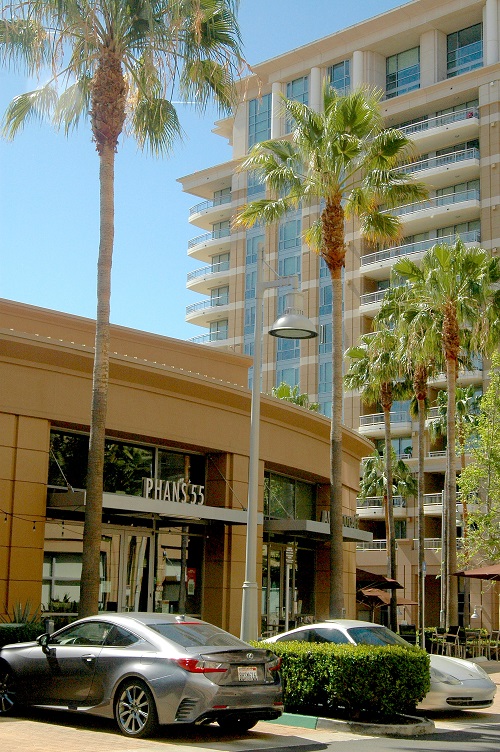 Tyler Barlow grew up near Irvine High School. Today he lives in the Villa Siena residential complex. He says that when he was looking for a place in 2020, IBC “stood out to me.” He pointed to the location “near Newport Beach, near the 405 and the 55, near everything.”

Barlow echoed the Niche.com description. “It totally is urban,” he said. “It’s a trendy, cool place to live, with young, hard-working, up-and-coming individuals.”

He also said, however, that the IBC is not pedestrian-friendly and he’d like to see more options for getting around the area. The streets separating his home from the rest of the IBC “are like a racetrack,” he said.

Told about the recent approval of a pedestrian bridge over Jamboree at Michelson, city plans to start creating a trail system in the area, and possibly more pedestrian bridges on the way, Barlow was approving. “I would use those for sure,” he said.

This incongruity of an urban area without walkability is one consequence of the IBC’s history. The thousands of residences were grafted onto what was originally planned and developed as an industrial and commercial hub. Some residents, landowners and city planners have been grappling with how to make this arranged marriage work.

We’ll look at those issues and efforts in the next part of our series.