The Opera at UCI

I tell my students that to sing opera, you must love your voice.
– UCI Vocal Arts Professor Darryl Taylor 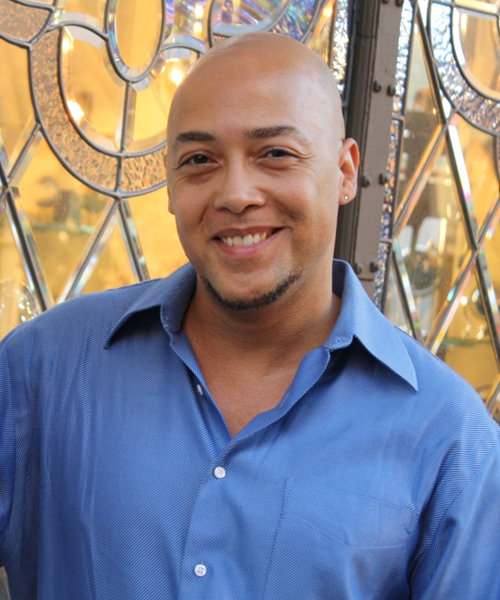 The Impresario, composed by W. A. Mozart, was performed on May 7th and May 8th by the students of vocal arts at UCI’s Claire Trevor School of the Arts.

Staged at the Barclay Theater under the artistic direction of Professor Darryl Taylor, the opera was directed by Emily Thebaut, and featured the UCI Symphony Orchestra with conductor Dr. Stephen Tucker, Chair of the Department of Music.

In the rainbow of music that I enjoy, opera occupies a unique spectrum. I recently had the delight of engaging not one, but two of these experts — Darryl and Emily — in separate interviews. Darryl has spent 18 years on the UCI faculty while continuing to build a storied career as a performing opera singer. Emily is a recent Vocal Arts Ph.D. graduate from USC, now expanding her career as mezzo soprano, voice teacher, and what I’m labeling a “comic opera singer” (see link below).

By definition, opera is a form of theater in which music is a fundamental component and dramatic roles are taken by singers. 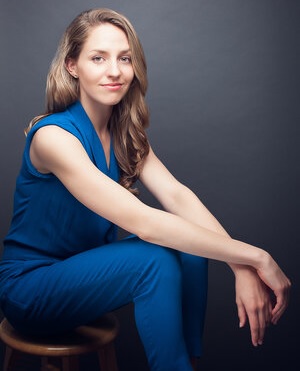 At last, I had the chance to ask these experts to explain the difference between singing popular music and singing opera. I think I know it when I hear it, but what’s the real diff?

Emily answered my question quite naturally: “Popular music and musical theater use microphones with a ‘belting’ style of singing that sounds like your speaking voice, but extended higher in your range. When singing opera, you have to really project: project O V E R the orchestra to the entire hall, without amplification. The voice, the body itself and the hall provide amplification. The way we project is by getting the sound far forward and really resonant.” Got it?

Mozart described The Impresario as a “comedy with music.” With four singers and one spoken part, you can easily wrap your arms around the plot. It’s a one-act play that runs about 45 minutes. Darryl described it as: “Compact. Providing the most opportunity for the least gnashing of teeth. The story is about two divas from different eras — one older, one younger. They try to one-up-each other for reaching the highest note, hoping to make an impression on the impresario who will be advancing just one of them.” 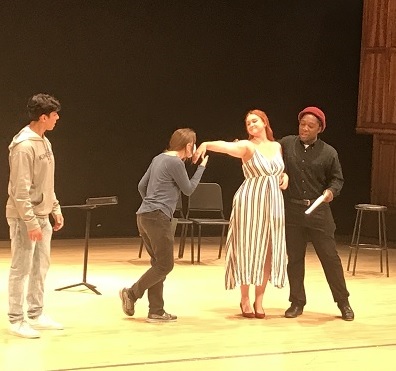 As the stage director, Emily had the genius to shift the presentation from Mozart’s writing in 1786 to the mid-20th century. If anyone remembers The NBC Opera Theatre, it was an American opera company with a weekly TV show that ran from 1949 to 1964, broadcasting both established and new operas, in English. That’s the setting chosen by Emily. I actually remember my parents watching that show. Us kids? We were out of there.

Let’s just say you, or a young member of your family has the talent, ambition and resources to set their feet on the path, while studying voice at UCI, to become a professional singer. Darryl illustrated a few of the hoops you’ll have to jump through. He told me that at UCI, “out of typically 110 applicants, we invite about 70 to come in and audition. We interview them to get a sense of their ambition.” Darryl explained that at UCI, there are about 23 Voice students at any given time. Three or four are graduate students. That means, UCI only accepts four or five new voice students each year. (Seems like a ring of fire to me.) Speaking for himself as well as other UCI faculty, Darryl adds: “Any student that we bring in, we want them to be successful.”

The cast of “The Impresario” at rehearsal (Photo Credit: Emma Ginzel)

Amongst these precious few applicants, I asked Darryl what he looks for that would get him excited. He said, “It’s not entirely quantifiable.” Nonetheless, Darryl hints at one of his super powers: “When you are a teacher, you have to have a really good ear. Not just to know what you are hearing immediately but where that (voice) predictably can go. Some students come in and they may have a phenomenal audition but some don’t grow beyond that. It’s a gamble that one takes. You can only hope to see the germ of what can be. So, you enter into this symbiotic relationship with students. You are a mirror for them. And they have to believe what is being reflected back to them.”

The beginning of this article included a partial quote from Darryl. Here it is in its entirety: “I tell my students that to sing opera, you must love your voice. If you are waiting for affirmation from the audience, you will always be disappointed. It’s like dating someone who is too needy.”

When I attended The Impresario, I didn’t expect to hear mature opera voices. Darryl framed my expectations by explaining that (for opera): “The voice does not finish maturing until you are about 25 or 28. Opera singers start building a head of steam in their mid-30s. You are in full flight in your 30s and 40s. In your 40s, you are still considered a young singer. This is where your voice should be.”

While watching The Impresario, I heard the germ of what can be.

To read the biography of Professor Darryl Taylor, click here.