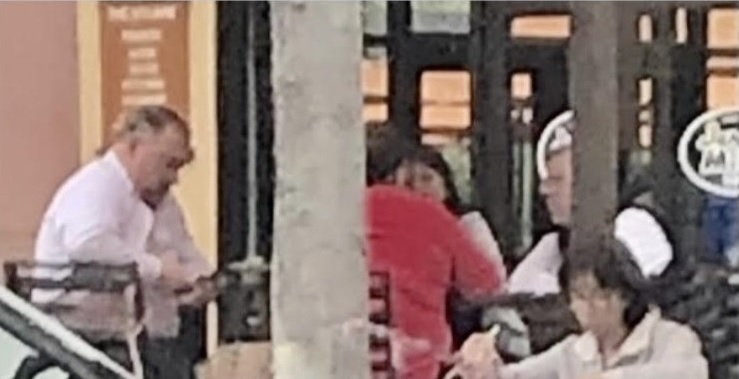 Photo taken at the May 13, 2019 “Irvine Cabal” meeting (from left to right, Patrick Strader, Melahat Rafiei in red with her back to camera, Farrah Khan, and Mike Carroll). Photo obtained from Orange Juice blog

When the Federal Bureau of Investigation (FBI) probe of corruption in Anaheim burst into the news in May, the term “Anaheim Cabal” — a secretive, backroom group of business and government leaders — entered the political lexicon.

That FBI investigation also exposed an Irvine angle: A key witness was first arrested for allegedly plotting to bribe Irvine City Councilmembers to approve cannabis operations in Irvine; then, that same witness turned state’s evidence in the separate Anaheim investigation.

But subsequent revelations — and the work of local journalists to get to the bottom of some other issues in Irvine — hint at another backroom group pulling strings for their own benefit. Among Irvine City Hall insiders, it has become known as the “Irvine Cabal.”

The following timeline outlines what has been uncovered by Irvine Community News & Views and other news organizations. The timeline includes gaps and raises more questions than it answers, but an array of facts show that something has been going on in Irvine for years that requires further investigation.

May 14, 2019: Khan, a Democrat, casts the decisive vote to appoint Republican Mike Carroll to the vacant seat on the Irvine City Council, drawing criticism from Democratic activists in Irvine.

June-July, 2019: Following a tip from one of Rafiei’s cannabis clients that she proposed getting money to two Irvine City Councilmembers in exchange for favorable votes on bringing cannabis business to Irvine, the FBI taps Rafiei’s phone.

July 22, 2019: Khan resigns from the Orange County Democratic Central Committee under threat of expulsion for voting to appoint Carroll.

Oct. 28, 2019: The FBI arrests Rafiei for allegedly attempting to bribe two Irvine City Councilmembers to pass a cannabis ordinance favorable to her client. Rafiei agrees to help the FBI in a separate investigation in Anaheim, and records of her arrest and the charges against her are sealed.

Nov. 28, 2020: The Irvine City Council, at the urging of Khan and Carroll, forms the Orange County Power Authority (OCPA). Khan and Carroll —  joined by Councilmember Anthony Kuo — arrange for the City of Irvine to loan OCPA $2.5 million of Irvine taxpayer dollars to cover start-up costs and initial operations. (The amount loaned to OCPA was later raised to $7.7 million.)

Dec. 8, 2020: Newly elected Councilmember Larry Agran is sworn in. Subsequently, one of his first acts is to cast the only “NO” vote on the Council as it approves guaranteeing a $35 million credit facility for OCPA. Agran expresses strong doubts about OCPA’s financial projections.

Dec. 16, 2020: The OCPA board meets for the first time and selects Carroll as chairman. Khan also joins the OCPA board as Irvine’s representative. Both are paid $212.50 per meeting, which totals some $3,500 each to date for just the regular meetings. This does not include compensation for special meetings, board phone calls, or other reimbursable meeting time.

Jan. 12, 2021: The OCPA board names Brian Probolsky as CEO of the Power Authority. Best known as a local Republican political operative and staffer, he is a director of the Moulton Niguel Water District, which employs Strader as a consultant. Probolsky has no college degree and no experience in the energy sector. His salary is set at $239,000 annually.

Sept. 9, 2021: Khan hires Cory Allen, Rafiei’s business employee and Khan’s 2022 campaign manager, as her Mayoral Executive Assistant, a paid City position. Allen’s duties include working as a liaison with OCPA, according to his online bio.

May 19, 2022: Rafiei confirms that she is “Cooperating Witness 1” in an FBI affidavit filed to support an arrest warrant in a blockbuster public corruption probe involving Anaheim business leaders and government officials. One of the alleged conspirators was recorded referring to the group as a “cabal,” which instantly became a media catchword for the investigation.

June 13, 2022: A letter by Dr. Kathleen Treseder, a UCI professor, environmental activist and candidate for Irvine City Council, is paraphrased with her permission in the Orange Juice Blog. Treseder revealed that she had hired Rafiei as her campaign consultant. However, after working with an environmental organization publicly critical of OCPA management, Rafiei allegedly told Treseder to stop criticizing Probolsky and that she —  Rafiei — could take care of any concerns with OCPA. Treseder did not temper her criticisms. Treseder and Rafiei parted ways, but not before Rafiei was told by an environmental activist: “This sounds like a cabal,” to which Rafiei reportedly replied: “It is a cabal, and Farrah is in the cabal.”

Irvine Community News & Views has learned that a number of Irvine residents have been meeting with the FBI, regarding OCPA officials and operatives. We will continue to keep our readers updated on new information as it emerges.