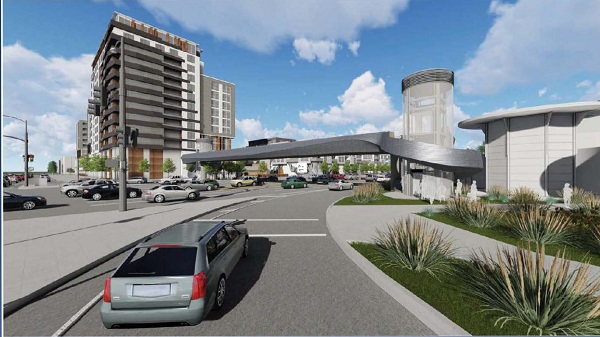 An artist’s rendering of the planned pedestrian bridge at Jamboree Boulevard and Michelson Drive. A second bridge over Jamboree at Alton Parkway, was approved in concept by the Transportation Commission on March 15th.

Both bridges, plus up to two more in the coming years, are in the Irvine Business Complex (IBC) and are a start on fulfilling some of the resident-oriented improvements outlined in the 2010 “urban village” Vision Plan for the area. The traffic portion of that plan was updated in 2020.

“This is very welcome and, frankly, overdue,” said Councilmember Larry Agran, who was on the Council when the original Vision Plan was developed and approved. “The IBC has a lot of unrealized potential as a vibrant and attractive ‘downtown’ urban core. I hope this is just the beginning of a sustained effort by the City and community to create something unique in Orange County: a large mixed business and residential area with an urban sensibility.”

Site selection for the bridge began with a list of 14 possible locations; the list was quickly whittled down to five that were given more intense scrutiny. That resulted in three “finalists” — the intersections at Alton, at Main Street and at Barranca Parkway.

The bridge at the Alton location, which would provide a link to the Diamond Jamboree Shopping Center, was recommended after extensive consultations with residents, business and property owners, the City’s public safety agencies, and other stakeholders.

The Alton location was preferred by a plurality of residents polled at several town hall meetings; it has the most traffic-delaying push-button crosswalk calls that would be eliminated; and it is the least expensive option at an estimated cost of $4 million.

“I like the location,” said Transportation Commissioner Shilpa Patel on Tuesday. “Diamond Jamboree is very busy, and parking can be difficult. This will encourage people to bike and walk there, rather than drive.”

Commissioner Marty Reiner agreed that it’s a good location. He cited the proposed bridge’s connectivity to a trail system, which is also under development in the area.