With original costumes and lighting, productions like “Vertical Balance” highlight the fact that modern dance is a very collaborative effort.  But, how does this marvel actually get pulled together?  Someone has to create the dance composition, plan the movements, select the music, design the costumes, and arrange the lighting.  Choreographers are like chefs — they select the ingredients, mix, prep and serve the magic that appears on stage.  And those of us lucky enough to be in the audience get to savor the delicious result.

For this event, IVC drew from a pool of choreographers which included seven faculty members, two guests, and three students.  I decided to take a ‘look-over-the-shoulder’ of three of the choreographers.  I can’t say I was surprised to learn that each one approaches their process very differently. 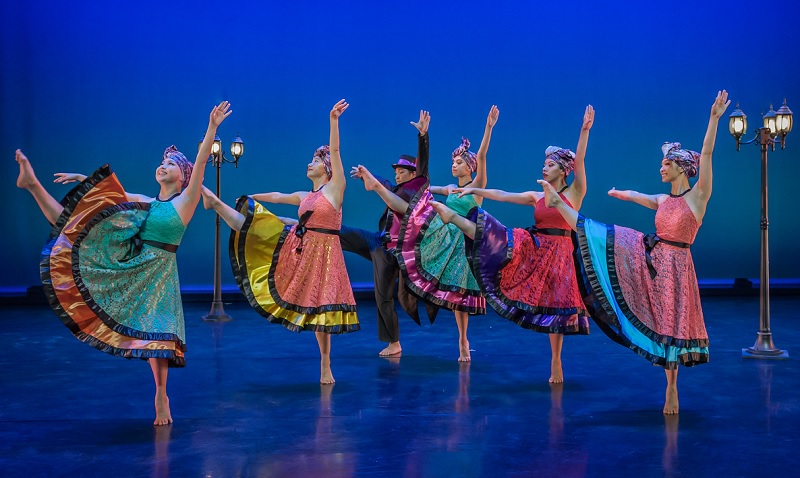 Let’s start with Jennifer La Curan, who is in her second year as Chair of IVC’s Dance Department.  I asked what the overall focus was for the spring concert.  Her response?  “A return to the lighter side.  To take you through life as a journey.”

Jennifer created two of the dance sequences for the concert.  “Second Line Jaywalkers,” was inspired by street dancing during a recent trip to New Orleans.  The musical score was a tribute to Marie Laveau, “The Voodoo Queen,” reputed to have miraculous powers.  The piece included five female dancers wearing head scarves, swirling their colorful broad skirts across the stage.  One male, in top hat and tails, was positioned in the rear of the dance group, portraying the protector of the group.

Jennifer’s second piece, “SPF,” combined four dancers alongside a full-screen video.  The curtains were replaced with a translucent screen.  The dancers wore black shorts and carried black umbrellas, performing from behind the screen.  All the while, a video was projected on the screen of the same dancers, bigger-than-life, cavorting around the IVC campus.  “Fire Escapes” by So Percussion supplied the music for the sequence.  This combination had a captivating and comical effect.  SPF.  Get it?  Sun protection factor. 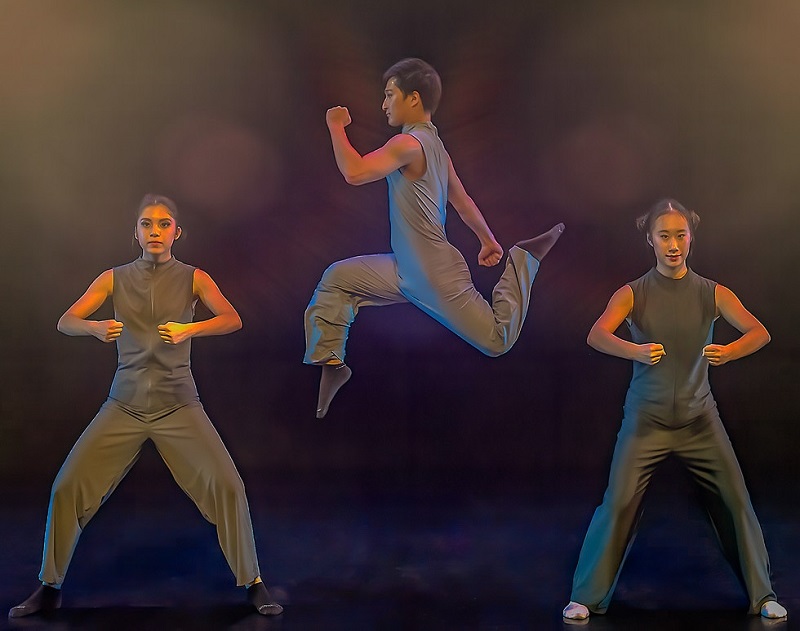 “The kids at IVC love what they are doing.  They work so hard for us.” That’s what IVC choreographer Michel Gervais told me.  Michel — who also choreographs for UCI — usually starts with the music and then decides what kind of movement the music inspires.  For his first piece, “Atoms,” the song “Atoms for Peace” by Thom Yorke provided the inspiration.

Michel told me that the piece doesn’t really have a story.  The dance simply suggests fishes or atoms floating in space.  Three dancers dressed in sleeveless grey jumpsuits, linked their motions, as in a line up, halting occasionally in tableaus, quirky like the song, with their eyes focused deeply into the audience.  It was the most gripping dance of the night and it made me grin the entire time.

Michel’s second piece, “Apples/Oranges,” was set to “Ungodly Fruit” by Wax Tailor.  The performance begins with a voice-over saying, “We’re just like other people.  We love to sing.  We love to dance.”  It took off from there.  With 13 dancers, the piece spotlighted Michel’s talent for the tightly coordinated dance steps and motion that flows into even larger tableaus.

Next up was a second year dance student, Ms. Jordan Burton, who presented, “We’re Broke.”  Jordan told me that she started with a phrase — a dance step that made sense with her body.  She then found a song to match the movements, which was “Broke” by Us the Duo. 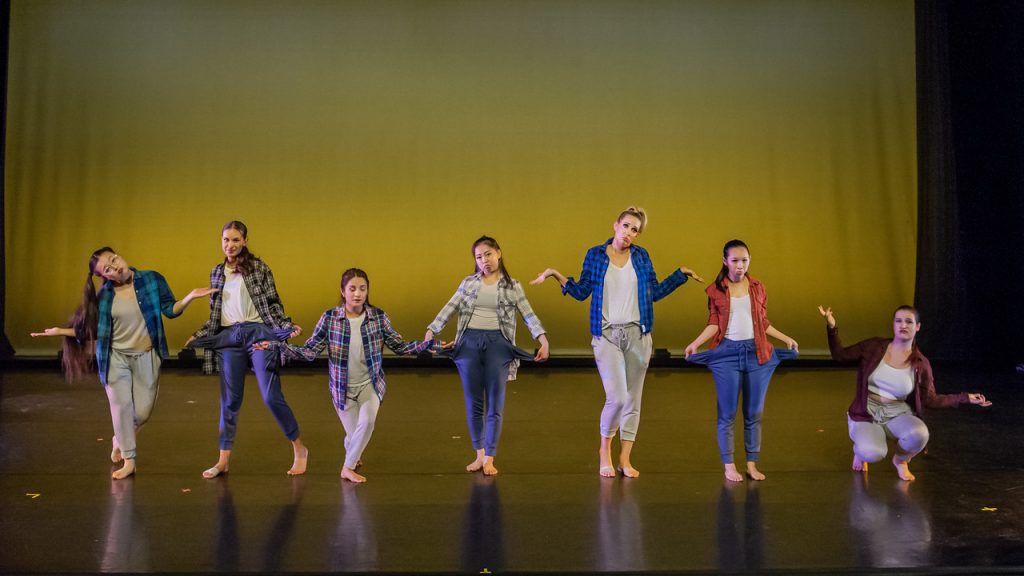 Jordan created the dance last year for herself.  But, this year, she expanded it into a very whimsical piece for seven dancers.  “The story is simple,” she explained.  “I’m a college student and I live off my parents.”  The piece follows the seven dancers, in casual everyday dress, initially handing each other dollar bills.  They close by standing with their empty pockets dangling and palms outstretched.  The audience went wild.

When I asked Jordan what she loved most, she explained, “I love the feeling of being on the stage and not having to think about anything except what I’m doing in that moment.”  I think she was speaking for not only students of dance, but anyone who gets the opportunity to simply…dance.

They will be back next year for their fall dance concert, and I’ll want to be there.  I invite you to join me in the audience.