How is your adolescent’s sleep health?  Does your teenager get the recommended 8 to 10 hours of sleep each night?  Or, does your son or daughter have to get up too early — arriving at school sleep-deprived and too tired to learn?

The U.S. Centers for Disease Control and Prevention sets clear goals and objectives for sleep health for America’s children.  For adolescents, the national objective is to “increase the proportion of students in grades 9 through 12 who get sufficient sleep” (defined as 8 or more hours of sleep on an average school night).

One of the reasons adolescents do not get enough sleep is that school starts just too early in the morning.  Based on powerful evidence, the American Academy of Pediatrics, the U.S. Centers for Disease Control and the American Academy of Sleep Medicine recommend that no middle or high school classroom instruction should begin before 8:30am. 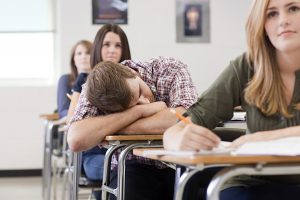 Here is the good news.  When teenagers get the sleep they need — perhaps getting an extra hour’s sleep, getting up when it’s light outside rather than dark — they, of course, arrive at school more rested; their academic performance generally improves; they tend to engage in fewer risky behaviors; they’re less likely to suffer from depression or other disorders; their athletic performance improves; and they even have better driving records.

As pediatricians, we educate adolescents and families on the importance of adequate sleep.  We understand that with crowded schedules and lots of demands on their time, the temptation for teens — and parents, too — is to cut back on sleep.  Parents can play a critically important role in promoting sleep health for the entire family by modeling and encouraging good sleep habits; setting a regular bedtime and rise time; and setting and enforcing a media curfew.

Here is some more good news:  Policy-makers and educators have been getting the message.  In Sacramento, State Senator Anthony Portantino (D-25th Senate District, Los Angeles County) and Senator Richard Pan (D-6th Senate District, Sacramento County) who is a pediatrician, have co-authored Senate Bill 328, “Pupil Attendance: School Start Time,” which would require that all middle schools and high schools in California begin the school day no earlier than 8:30am.  SB 328 is pending in the State Senate.

Of course, school districts don’t have to wait for the State Legislature to act.  In fact, school officials are initiating a pilot “late-start” policy in the La Cañada School District, taking on the formidable task of adjusting class schedules, school transportation, teacher contracts, and before-and-after-school schedules for sports and other activities.