Reducing Gun Violence, One Household at a Time

2019 UPDATE:  Below is an article I wrote just over a year ago.  Since that time, the number of gun deaths in our country has continued to rise dramatically.  In fact, 39,773 Americans died from gun violence in 2017.  That’s 3,521 more Americans died as a result of gun violence in 2017 than in 2015.  As a pediatric physician, a mother, and a citizen, I cannot think of a more pressing health & safety issue facing our community.  That’s why Irvine Community News & Views is re-publishing my article, along with a powerful new video from the Ad Council.

Most of the practicing pediatricians and other physicians I know pay attention to the latest research and opinion published in leading medical journals.  I recently read an outstanding editorial in the Journal of the American Medical Association (JAMA Pediatrics, October 9, 2017).  Entitled “Death by Gun Violence — A Public Health Crisis,” the editorial noted that while public attention is understandably focused on horrific mass shootings, typically with high-powered assault weapons — Sandy Hook Elementary School in Newtown, Connecticut, the Charleston church shooting, the massacres in Orlando, Las Vegas, and the First Baptist Church in Sutherland Springs, Texas — the ugly truth is that our country is awash in guns and everyday gun violence that often goes unreported. 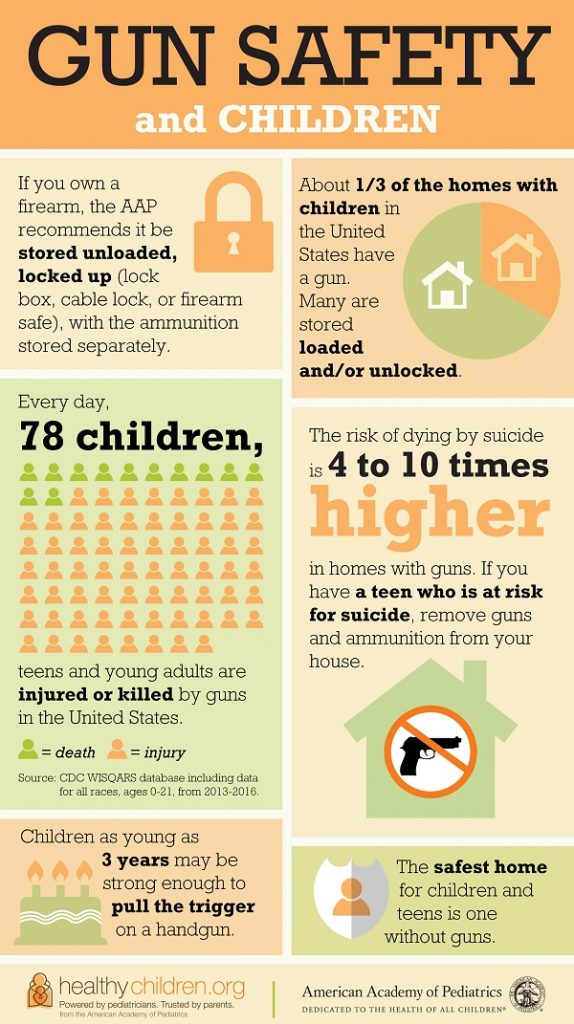 In fact, on average, nearly 100 Americans die from gun violence each and every day (36,252 in all of 2015, almost the exact same number killed in automobile accidents that year).

The JAMA editors pointed out that most gun deaths are from suicide and gun accidents, typically in homes where guns are readily accessible: “Guns do not make individuals, their families, or homes safer, and they result in far more deaths to loved ones than to an intruder intended to cause harm.”

The editorial noted that in 2015, an astonishing 60.7% of all gun deaths in the U.S. were from suicide.  Think about your own home.  Is there a despondent spouse, or a young adult or teenager who may be suicidal?  As the JAMA editors noted: “The means used to attempt suicide matter; guns will result in suicidal deaths well over 90% of the time, whereas ingestion of pills or wrist cutting will be unsuccessful more than 90% of the time.”

Addressing the continuing epidemic of gun violence in America, JAMA editors concluded: “The key to reducing firearm deaths in the United States is to understand and reduce exposure to the cause, just like in any epidemic, and in this case that is guns.”

Yes, guns kill people.  So, as I often suggest to parents and grandparents who, of course, love their kids and grandkids: Make your family and your home safer for the new year by removing all guns and ammunition from your home.  Here in Irvine — America’s “safest” City — if you want help with gun removal and disposal, call the Irvine Police Department at 949-724-7200 and ask about their gun turn-in program.

Removing guns from our homes

Below is the Ad Council’s compelling video on the importance of removing guns from our homes:

The truth is that, in Irvine (and elsewhere), a home without a gun is a safer home.