As a former Mayor and longtime Irvine City Councilmember who served until 2014, Larry Agran continues to be an outspoken advocate for toxic testing at the site of the now-under-construction Portola High School, on Irvine Boulevard in north Irvine, next to the Great Park. Agran opposed the siting of the High School at its current location for a number of reasons. He noted its proximity to a “capped” former military toxic waste dump, and he has pointed to continuing discoveries of significant toxic contamination on the school site.

Before coming to Irvine with his family in the 1970s, Agran served as Legal Counsel with the California State Senate Health Committee. A Harvard-educated public interest lawyer, Agran later wrote an acclaimed book, The Cancer Connection, published by Houghton Mifflin and St. Martin’s Press. The Cancer Connection documents the occupational and environmental causes of cancer, and advocates preventive public health policies.

Our ICNV staff recently sat down with Agran to talk about his continuing calls for toxic testing at the Portola High School site.

Q. Your political opponents say your continuing calls for toxic testing at the Portola High School site are just stoking fears — and that you are still unhappy that IUSD and the City chose this particular site despite your opposition.

A. Well, I am unhappy with the site they chose. It’s a poor site for many reasons. But that decision has been made, and the $300 million Portola High School is now under construction. The question is no longer about site selection — it’s about ensuring site safety.

Q. What is it about site safety that concerns you?

A. The fact of the matter is that Portola High School is located on a former military base and Superfund cleanup site that has not been properly tested for toxic contamination. In fact, at about the time construction of the High School was getting underway, large quantities of toxic contamination — including cancer-causing petrochemicals such as naphthalene and benzene — were discovered on the site. In one instance, 78 truckloads of contaminated soil had to be hauled away before construction of a storm drain could continue.

Q. Well, why wasn’t this brought to the attention of the public?

A. Good question. In fact, the City’s environmental consultant, Mr. David Richter, wrote a memo saying that this discovery should cause the State Department of Toxic Substances Control to order suspension of Portola High School construction until more testing could be done to ensure the site’s safety for future students, faculty and staff at Portola High.

Q. So what happened?

A. Nothing. The memo got buried in the bureaucracy. It was only when Dr. Harvey Liss began investigating and reporting on this matter in Irvine Community News & Views that the story came to light. Then, instead of doing something, the State Department of Toxic Substances Control simply said they stood by their previous decision to certify the site as acceptable for school construction.

A. I doubt it. What we do know is that the storm-drain discovery and a number of perimeter test wells have revealed that all four perimeter sides of the site have significant, measurable levels of toxic contamination. Now, what are the chances that the site is contaminated with petrochemicals at its perimeter, but that the entire interior of the 40-acre site is free of any contamination? That’s why we need to do comprehensive testing — to find out before Portola High is occupied by teachers and students and staff in September, 2016.

Q. But the School Board and the Department of Toxic Substances Control say they’ve already tested the interior.

A. The interior of the site was tested only for pesticide residues. It was NOT tested for Semi-volatile and Volatile Organic Compounds (VOCs) — the dangerous and cancer-causing petrochemicals that were found on the site’s perimeter.

A. I’m not sure. It’s up to the community — the parents and grandparents and conscientious citizens of Irvine — to compel testing. They should demand — absolutely demand — that comprehensive, independent toxic testing be undertaken immediately. The testing itself would cost an estimated $100,000, a small amount considering what is at stake.

Q. And what if the Department of Toxic Substances Control and the Irvine School Board don’t order new testing?

A. If they don’t, they are potentially exposing generations of teachers, staff and students to risks of diseases, disabilities, and even deaths that could have been avoided had proper testing and cleanup been done. And, of course, the legal and financial and moral exposure that we all have may haunt us for decades to come. 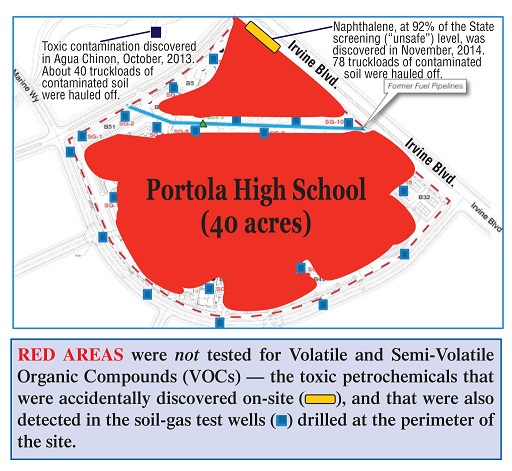