They say that dance lives only in-the-moment.  After watching UCI’s Dance Visions 2020 at the Barclay Theatre and speaking with Molly Lynch — the artistic director of the program — I’ve learned just how many moments are braided into a single dance performance.

Molly Lynch is a petite woman with a ready laugh and eyes which frequently sparkle behind her signature neon red-rimmed eyeglasses.  Before coming to UCI, Molly spent 16 years as the Director of Ballet Pacifica.  She became Chair of the Claire Trevor School of the Arts, Dance Department in 2018 and is the artistic director of the annual Dance Visions performance at the Barclay.

Though I’ve met Molly before, sitting in her office for the first time I got an insight into her deep well of knowledge about dance and dance education.

I asked Molly to explain the difference between running a dance company like Ballet Pacifica and an academic dance department. She explained, “Dance companies have a real hierarchy, depending on the roles of their dancers.  You begin with principal dancers at the top, followed by soloists, and then demi-soloists above a corps de ballet.  We don’t run an academic dance department like that.  UCI provides an educational environment.  Students train at certain levels — ballet, modern and jazz.  We try to give everybody the opportunity to perfect their abilities.”

Molly continued, “When working for a Fine Arts dance degree, students take a full load of classes.  Students take classes that go beyond learning dance and choreography, including those in Arts Management.”  (This is an area of study which Molly has pioneered.)  She explained that students also learn about kinesiology, which is the interrelationship of physiological processes and anatomy of the human body with respect to movement.

When asked about UCI’s Dance Visions 2020 performance, Molly said, “This is an opportunity for our faculty to work as choreographers with our students, not just as dance instructors.  For this year’s program, there were three new pieces and re-stagings of two prior works, all created by UCI faculty members.  Three were developed in collaboration with UCI’s faculty musicians.” (Loretta Livingston with Garrett Gagnon, Charlotte Griffin with Aron Ghavez, and Chad Michael Hall with Alan Terricciano.)

Let me sketch a couple of my favorite performances from Dance Visions 2020 while they’re still twirling around in my mind.

The opening piece, “La Sylphide,” choreographed by Tong Wang, had a classical ballet structure.  Thus, there was an easily understood hierarchy.  A romantic episode with leading soloists along with a 25-dancer corps de ballet. 29 dancers all on pointe shoes, twirling in white chiffon tutus like dandelions in a light breeze.  In Molly’s words: “This is harder as a dancer to do than the solo parts because it’s a large ensemble of dancers that dance together while trying to look as one.”  For those readers who have an appreciation for classical ballet, “La Sylphide” took my breath away. 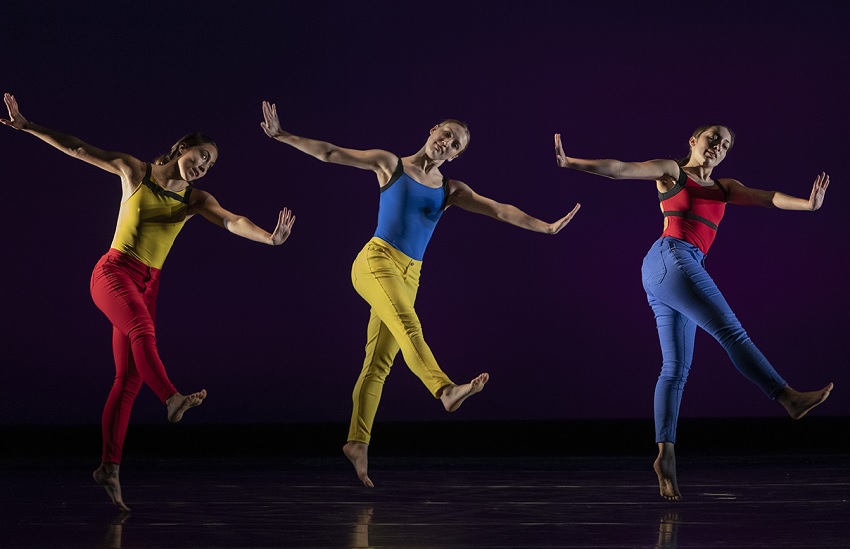 Performance of “We Gather Together” by Chad Michael Hall. Photo Credit: Rose Eichenbaum

Chad Michael Hall’s piece, “We Gather Together” is built around an original composition of music by UCI’s Alan Terricciano.  The music was inspired by several blues composers from the mid-20th century.  Combining these two talents with the skills of the 15 dancers, some in black, some wearing bold, primary-colored simple costumes, produced a witty and fast-paced frolic.

Molly illustrated her primary mission as Chair, saying, “You can’t learn dance from a book.  Dance is really passed on from person to person.  We learn from our teachers and pass it down to our students. And they will pass it down to their students.”

This accidentally resonates with one of those braided moments that I stumbled onto.  During Lubovitch’s re-staging of “North Star,” dancers in dark costumes form moving tableaus, swirl away and then reform.  The “Third Constellation” is a solo dance where Nola Gardenhire Gibson delivers a frenetic and mesmerizing performance. 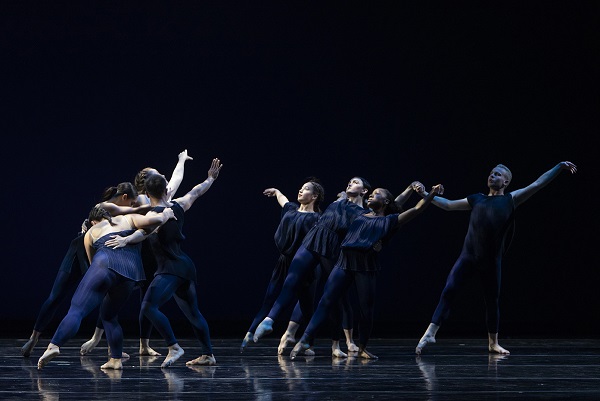 The connection?  Earlier, in the lobby I introduced myself to a woman who clearly has the bearing and elegance of a dance professional. It was Nola’s mother, Mrs. Robin Gardenhire.  A dancer of storied renown, Robin happens to be the Founder and Artistic Director of CBLA (City Ballet of Los Angeles).  Later, cheering in a row behind me, I discover Nola’s grandmother, Margaret Gardenhire.  Margaret enjoyed a career in the 1970s, as a TV actress.

When I’ve invited friends, such as my visiting adult son, to join us for dance performances, they’ll often say, “I don’t understand dance.” Molly has heard this objection many times and her answer is profound.  She says, “You don’t need to understand it.  Just come in and enjoy it.  Dance is not like reading a book where you need to read every word.  Just let it wash over you and get whatever you get out of it.  There is always a sense of taking you on a journey or telling you a story.  Maybe you don’t exactly know the story, but you can tell the dancer is going on a journey and they are taking you along with them.”  Yep, that explains why I return year-after-year to every dance event at UCI.

There is no formal nationwide ranking among academic-level dance departments.  However, the UCI dance department is held among the top ten by its peers.  Molly offered a clue as to the depth of talent entertaining you at any UCI dance presentation, saying “Currently, we have 157 undergraduates and 16 grad students.  To be here, first, they must apply and be admitted to UCI.  To get into the dance department, students are selected only after an audition, held in January.”  That means the department accepts about 35 to 40 new freshmen dance students each year from the 250 who apply.

There’s much more to come from the dance department at UCI this year.  My wife and I are looking forward to the dancers taking us along on their journey.  I encourage you to join us from a seat in the audience!