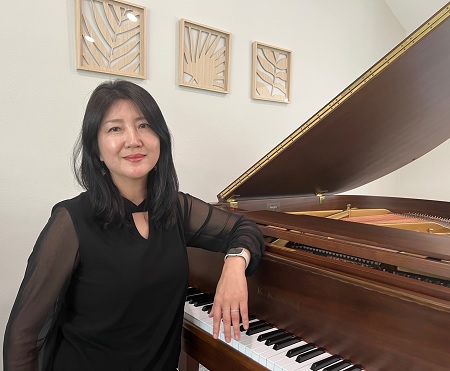 When I invited two gifted Irvine jazz musicians — Celine You and her husband Forest Muther — to join me on my patio for lunch and an interview, I got lucky. The weather was ideal, my table overlooking Shady Canyon was set, and they showed up.

The Celine You Trio, featuring Celine on keyboard and Forest on drums, is a relatively new band, locally. However, when I opened the pages of their history, I discovered a very rich landscape.

I first met Celine and Forest while watching them perform at the OC Fish Grill, located at 5789 Alton Parkway. The restaurant hosts live jazz on Friday and Saturday evenings. The venue reminds me of an old-style jazz club, only better. There is outdoor seating under an ivy-covered trellis and indoor seating in areas adjoining the patio. When I visited in July, the 100 or so guests overflowed onto temporary tables arranged along the surrounding sidewalk. 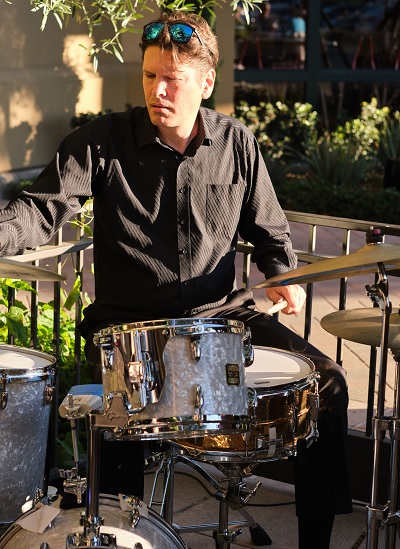 Celine leads the band — joined by Forest, Fred Uyehara on bass, and the velvet-throated Porter Singletary. (If you were to look away while listening to Porter sing, you would think you were listening to Nat King Cole.) Floating on the frothy ambiance of jazz, the crowd reveled as the sun set on that balmy July evening.

During a break, I introduced myself to Forest and asked what he thought of Joe Morello, best known as the jazz drummer in the Dave Brubeck Quartet. When Forest told me that he had trained under Joe Morello, my jaw dropped.

I immediately wanted to learn more. Beyond never-ending practice and training under other artists, I asked how does a musician build a career? Forest filled me in: “Celine and I were professors of music for 14 years at JEI University, in Incheon, Seoul Korea.” During that time, they were given the opportunity to create a jazz music program, allowing them to design and implement the curriculum from the ground up.

Celine and Forest have played together for 25 years. They have been living here in Irvine for the past five years, and are now working to expand their local profile any way they can. According to Forest, that means “gigging in a lot of local venues from big bands to high school bands to trios.“ And, Celine says that they also teach a lot. With a well-established reputation in Korea — Forest hosted a jazz radio show — you get a picture of a dedicated professional pair creating a new track here in Orange County.

Forest explained some of the challenges associated with being a musician here: “Turns out there are a lot of musicians in OC but it’s very dispersed. So, it takes a lot of getting to know people and making connections.”

Both Celine and Forest command a large repertoire of jazz pieces. However, they also create their own original music. Creativity has always held a deep fascination for me, so I asked how often do they spend time composing an original piece? Forest responded: “Daily. I’m always working on something. If we have a big event coming up, then it tends to come out in bursts.” Forest quotes the famed jazz pianist Bill Evans: “There’s a switch you can turn on. OK, I need it now. And I can produce a lot.” And if one is not under any pressure? “Well, then it’s kind of more about listening and drawing in influences.”

I also wanted to know what a full-time musician thinks about when listening to music. According to Forest: “Whenever I hear music, it’s never background. Music is always foreground for me. It pops to the front. And I just start analyzing it.” His next observation surprised me: “Starting around seventh grade, I began hearing things differently from other kids. So, I realized music was something I could do.” As a very satisfied ‘seat in the audience,’ I have to say they do it pretty darn well.

Looking over the horizon, I asked what about their long-term goals. Forest answered: “In Irvine, there is a large youth program for orchestral music, which is great. I would like to see something for youths performing in big bands. It’s on my mind to start this.” As soon as they get a venue, I want to be there.

Living in a household with two full-time musicians has got to be different from my own life. So, I asked if there are any rules they’ve worked out in order to avoid musical conflicts that may arise. The answer was not what I expected. Celine explained: “I do the cooking and he does the laundry and gardening.” The real answer is that Celine and Forest have lived and worked together for more than two decades. In Celine’s words: “We don’t have to talk about it. It works itself out.” There’s one more detail I wanted to ask: “Is there any musical style that is unwelcome in your household?” Without a pause, they chorus: “No. No. No.”

Forest expanded on their answer: “Often, I want to listen to something that I am not playing. Something that goes off in a different direction from what I am doing on the bandstand. Like rock or modern classical rock on the radio.” 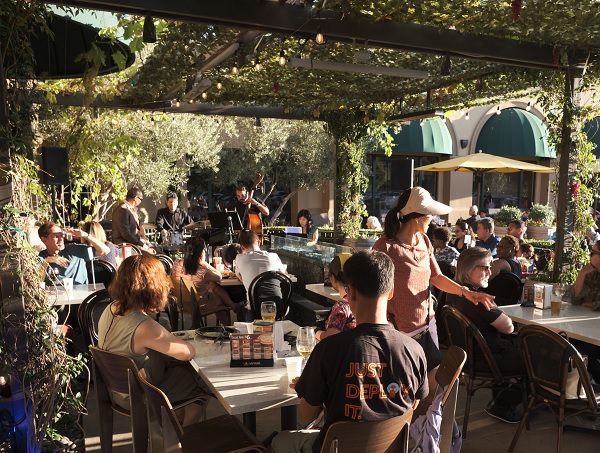 When I observe musicians assembling on stage or setting up their instruments, I’m often envious of their natural comradery. Celine added some personal perspective by observing: “When you meet people, from anywhere, as long as they know a couple of jazz standards, you can be friends right away. Even if you don’t speak the same common language. I feel brotherhood right away.”

This article would not be complete without a tribute to the owners of the two restaurants, OC Fish Grill and the neighboring, I Can Barbecue Korean Grill. I had the chance to speak with Edip Aral who wears two hats. He is the operations manager as well as the social media manager. He arranges the gigs.

Like myself, Edip is not a musician, but is very fond of jazz. He explains that the original idea for weekend Jazz nights was developed between himself and the restaurant manager, Bursa Karaaslan.

I’m looking forward to seeing Celine and Forest when they return to OC Fish Grill on August 20th and 27th. What about tickets? Just enjoy the great food and service. The jazz is free.