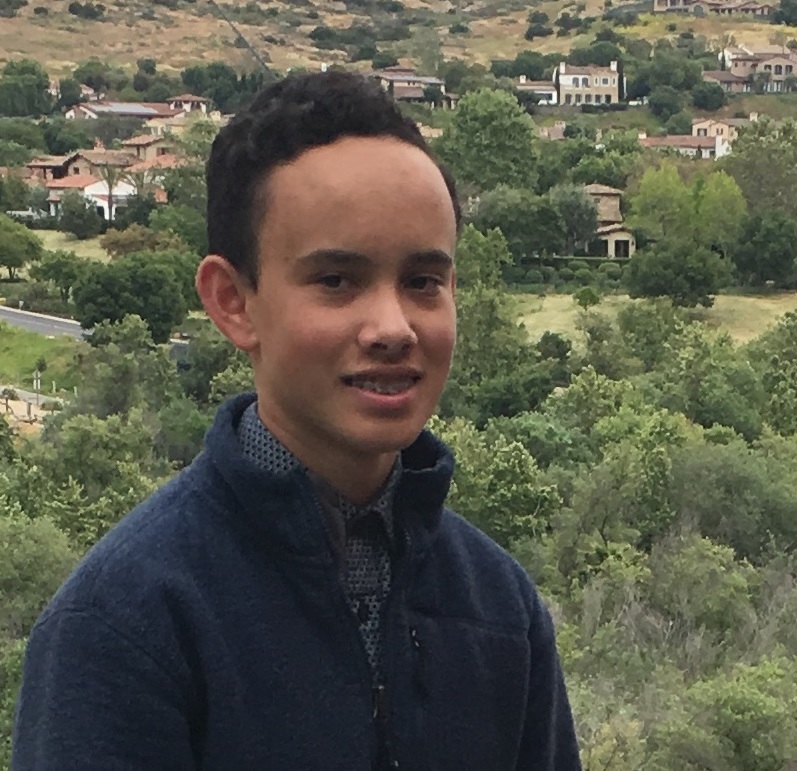 On a balmy Saturday morning overlooking Shady Canyon from my patio in Turtle Rock, I had the pleasure of interviewing Kevin Corrigan and his mother Catharina.

At first, Kevin didn’t want to go.  Not the interview:  To his initial singing trial at Children’s Choir, St. John Neumann Catholic Church, Irvine at age 7.

Kevin had told his mother, “You always try to set me up for something that I don’t like.”  Mothers seem to have a deep memory for treasuring these jewels.  Catharina had persuaded Kevin that if he didn’t like it, he wouldn’t have to go again.  That audition ended up changing his life.

For the competition — held at the Hyatt Regency in Santa Clara — Kevin was given nine minutes to present three classical songs.  His voice coach had selected “When I Think Upon the Maidens,” by Michael Head, “Die Forelle” by Franz Schubert, and “Ch’io Mai vi Possa” by George Frideric Handel.

Speaking with Stephanie — who has worked with Kevin for nearly five years — I learned that just prior to the statewide competition, Kevin’s voice had changed from tenor to baritone, something she designated as “baritenor.”  So which voice register to use for the event?  They decided that day.   Stephanie said that Kevin got lucky with the timing of his voice change.  With most young men the change is very gradual and may not be complete until they are 18.

Now Kevin has a deep voice range, very rich qualities in the middle and he’s able to reach the higher range as well.  Stephanie concludes, “The simple answer as to how all this happens is that he works very hard; he tries every exercise over and over.”

After learning that Kevin plays piano as well as violin, I had to ask why he chose voice.  His answer was that the level of competition for those instruments is pretty extreme.  Kevin said that “Voice is convenient.  You don’t have to carry around an instrument and you can go in so many directions – classical, musical theatre, popular songs.”

Before he even graduates from high school, Kevin will probably have visited, and performed in, most of the major cities of the world.  He’s already performed at the Segerstrom Center in Costa Mesa, St. Patrick’s Cathedral in New York, the Kennedy Center Performing Arts in Washington D.C., and three separate cultural halls in Japan.  Kevin tosses in, “There’s nothing like seeing the world before you get out of high school.”

When I asked Kevin what makes one venue more unique from the next, he told me, “If a hall is large and the acoustics are good, you are more vibrant.  The real plus is you get to touch more people’s lives.”  However, Kevin said that he prefers smaller settings because those venues allow performers to connect directly with the audience.  They’re not miles and miles from the stage.

My next question was one I love to ask artists: “Spending so much time training and performing, what are you personally getting out of it?”  Kevin said that “Music is a way to relate to an audience. It has transformative powers.  And, it has helped me grow.  Plus, friends. Some who I might not see for a while but then at the next choir event, I’ve got friends already.  You do music.  I do music.  We’re friends right away.”

Before Kevin and his mom Catharina headed back to Woodbridge, he volunteered to sing.  This was something I’d been looking forward to from the beginning of our interview.  I brought my wife, visiting son, daughter-in-law, and grandkids out onto the patio to listen.

Kevin began with the first of three songs from “Die Forelle,” presented during his recent state championship.  These songs are not true arias, but are rather songs written to be sung in recital, typically with piano accompaniment and often set to a poem.  If you look away, you’re easily convinced that you’re hearing a voice that is broader than any 15-year-old you’ve heard, one with promising richness. (OK, I must admit that my grandkids don’t appreciate Shubert like I do.)

Kevin also sang “You Will Be Found,” from the 2017 Tony Award-Winning Best Musical, “Dear Evan Hansen.”  He displayed convincing projection over an even broader vocal range.  And his voice portrayed some real tenderness — a quality I listen for.

A great musical performance will actually take over my mind.  In many cases, tears emerge so I always carry a handkerchief. In this case it was a minor problem.  With Kevin singing just 6 feet in front of me, I had to step back to avoid embarrassing myself.

Summer plans for Kevin include a vocal intensive program at UCLA, performing for the Branch Honor (Orange County) and State Honor (Santa Clara) and hopefully a brief tour around the Bay Area after receiving his awards.

My final question was this:  “What’s it like living with three younger brothers?”  Kevin gave a puzzling gaze, and then answered as any teenage boy would, “Some days we’re best friends; some days it’s war.”  Let’s hope it’s mostly friends, because anyone who’s heard Kevin perform will want to hear him sing again.

To hear Kevin singing “You Will be Found,” click here.

Although he is neither a musician nor a professional critic himself, Terry is a great admirer of the arts.   He's a self-described, "seat in the audience," who enjoys attending and promoting the immensely talented students and creative live entertainment events available at little to no cost to our community.

You can contact Terry by emailing him at terry.schilling@tug2go.com