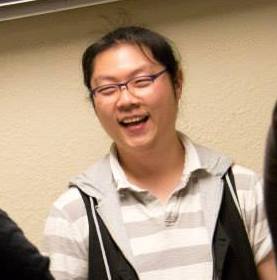 “Not everyone will decide to call what I do music.”  Meet Edward Park.  He’s been teaching music theory and composition at Irvine Valley College (IVC) since 2016, and recently began teaching a course in music technology at Chapman University.

This year, my wife and I attended two concerts that were performed or directed by Edward.  Both of the concerts we attended were thought-provoking.

When I had the chance to speak with Edward, he told me that what he strives for as a professor is not easy to characterize.  Edward’s teaching is eclectic and very contemporary.  “Non-standard” is the term Edward prefers.   I agree that the two concerts I attended were not your typical musical performances, but I found them innovative and captivating.

In February, Edward presented the “Dinner Music,” which included all of his own compositions.   He closed the concert with three short pieces he had composed for a solo clarinet, which is Edward’s standard musical instrument.  The pieces were delightful and engaging.  But the rest of the program truly revealed the breadth of his creativity — including a piece which consisted of readings of his own prose, accompanied by a pianist.

The concert began with an original electronic music piece. “She Was Our” was developed and presented on a laptop computer.  This musical form reflects Edward’s origins of learning and transcribing video game themes and their variations.  The performance was thrilling and a shiver of delight seemed to run through the entire audience. 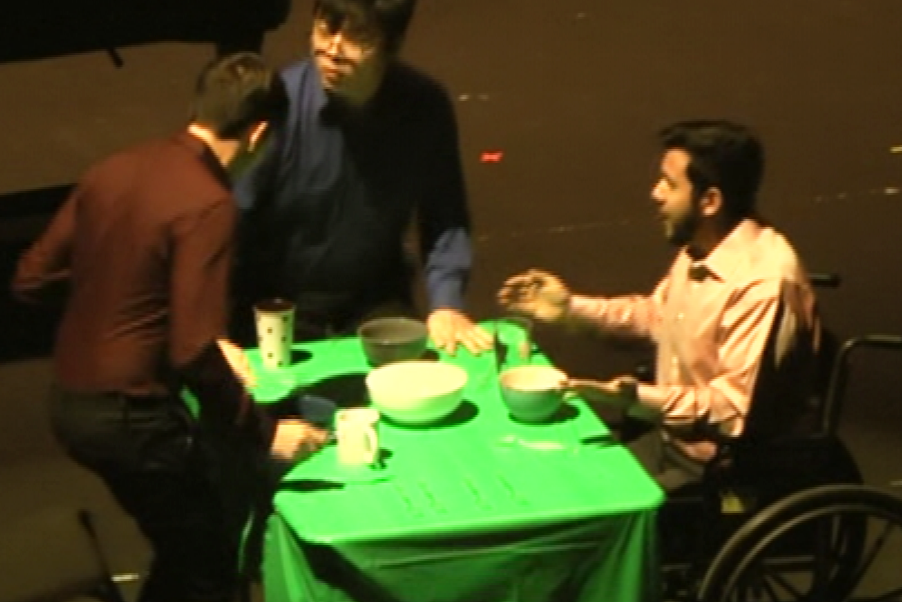 However, the piece that I’ve been talking about ever since the concert ended was inspired by John Cage.  Edward performed “Every Day I Wake Up and Thank John Cage.”  The piece includes performers, seated at a card table set with cereal bowls, cups, and plastic spoons & forks.  No musical accompaniment.

The performers interact almost constantly but with non-articulated vocalizations — growls, shouts, jingles, followed by silence.   Playful sword fighting with the plastic forks accompanied rude voices.  They tossed handfuls of colored, sugar-coated cereal back-and-forth.  It captivated me to realize that simple interactions around dining are often dramatic and, in a way, quite musical.  Edward was able to recreate typical breakfast settings I’ve recently shared with my visiting grandchildren (ages 3 and 6) using college students.  (I’ve included a link at the bottom of this article for you to watch Mr. Cage’s pioneering work in this “nonstandard” genre.”

In October, Edward directed IVC’s “Midnight Blue Concert.”  For this performance, he pulled together an ensemble of eleven music majors.  The program included pieces created by others working in the same genre as Edward.  In his words, “Pieces written with non-standard notation with open ended instrumentation for any combination of musical instruments.”  The results were delightful though challenging to describe so Edward expanded my understanding.  He told me, “A lot of people have a closed-minded nature about what constitutes music.  They will reserve that term for classic eras and forms and would not place what I’m doing in that category.”

Here is a prime example.  During “Stones” from the “Prose Collection,” written by Christian Wolff, Edward’s ensemble approached their podiums where they found a variety of stones — from the size of a marble to a melon.  The presentation was a process of rubbing these stones together, or tapping them, one on the other.  Or rubbing or tapping them on their musical stands.  All of this without any instrumental accompaniment or vocalization.  Edward explained, “It was meant to be performed by any group of people, with or without any musical training.”  The results were reminiscent of recordings of rivers flowing, a rustling wind through trees, or a gentle, breaking surf.  I would love to have a long recording of “Stones” and let it run for long periods in the background of my office. 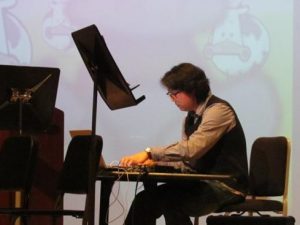 I asked Edward how his students react to these pieces.  He said, “Students seem to take it very seriously.”  Edward’s work constantly suspends one in the dilemma of listening to something that is at times serious, and at other times, not serious at all.  And that’s the real marvel of his work.  So, I asked how a typical audience reacts.  “I’ve actually instructed my students to take their performance seriously.  The audience gets sucked in.  If we portray this material in a casual way, the audience will have a harder time connecting with the music.  They often think it’s funny.”  This comes from someone who, behind his shy smile, clearly has a great sense of humor.

Toward the close of the concert, Edward performed “Workers Union,” written by Louis Andriessen, with the ensemble returning to classical instruments – two xylophones, saxophones, drums, a vocalist, etc..  In the words of the composer, “The piece is a combination of both individual freedom and severe discipline as the rhyme is exactly fixed.  The pitch is indicated only approximately, on a single-lined stave.”  The result is an acoustical thrill ride, a cacophony.  The composer says it’s similar to organizing and carrying out political action.

I had to ask Edward where he finds inspiration.  He said, “I am quite accidental.  For me, I’m not sure what I want to do next.  I don’t have a vision in my mind for what my music should be in ten years.  Ideas build up slowly over weeks or years.”

I urge readers to join me in attending these highly unusual yet captivating performances that are taking place right here on Irvine college campuses.

Let me close with a quote from John Cage, Edward’s true source of inspiration.  It pretty much sums up the focus that Edward uses to expand the known horizon of modern music:  “We think of noise and we try to ignore it as bothersome.  But if we sit and intently listen to it, it is interesting to us.”

To review the IVC Calendar for upcoming concerts, click here.

To watch a performance of “Stones” by Christian Wolff, click here.