Mayor Khan and Her Council Majority Push Through Hundreds of Millions of Dollars in New Projects, Without Input from the Planning Commission … or Irvine Residents 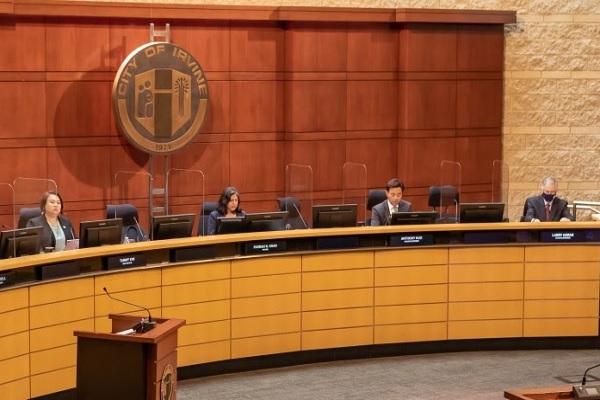 During a contentious marathon meeting on September 27th, the Irvine City Council approved two controversial long-term contracts for facilities to be built in the Great Park. On two 4-1 votes (Councilmember Larry Agran voted NO), the Council — sitting as the Great Park Board — approved a 40-year deal with USA Water Polo to occupy part of a proposed $80 million water polo & aquatic center; and a 50-year deal with Live Nation to operate a proposed $130 million, 14,000-seat outdoor amphitheater.

The actions came despite objections that the agreements and supporting information totaling more than 600 pages were made public just a week before the Council meeting and were being pushed through without public input or any review by the City’s Finance Commission, Planning Commission or Transportation Commission.

City staff told the Council that once the agreements were approved, the staff would come back in the next several months with firm cost estimates, identified funding sources, and detailed building and site plans.

“This is totally backwards,” said Councilman Agran after each vote. Agran stated: “These are major projects that will affect the City for a hundred years. We’re talking about hundreds of millions of dollars. And we’re just passing them on the fly like this? And they’ll tell us later what it was we voted on? That’s just plain wrong.”

Although Agran was the only member of the Council to vote against these new unstudied projects, dozens of residents from the Great Park neighborhoods and throughout the City joined Agran in questioning the rush by the Council to push hundreds of millions of dollars worth of projects forward, without the necessary planning. “I haven’t seen any detailed planning,” said Jane Olinger, a long-time Irvine resident. “I haven’t seen anything other than pictures.” Olinger continued: “We have commissions. I urge you to avail yourselves of them. If there’s anything we can all agree on here, it’s that this should at least be looked at by the Finance Commission.”

Another long-time Irvine resident, Alan Meyerson, noted that he can hear the bass thumping at his home in Woodbridge when there’s a concert in the current temporary amphitheater in the Great Park. Meyerson suggested the City may want the amphitheater to be roofed rather than open-air. “That would mitigate all the sound and help the residents,” he said. “I’m not understanding the push to put this in so fast, without more studies,” said Meyerson.

Community activist and journalist Branda Lin, who is running against Khan in the November 8th Mayoral race noted, “We still don’t have a Master Plan for the Great Park … This is not responsible planning. At the end of the day, how is it all going to work? We need answers and we need a plan. The rest of the City had a Master Plan, and the rest of our City has worked well. The Great Park needs a Master Plan, and I don’t think we should move forward until we have one.” When Lin finished speaking, the audience cheered and applauded.

Former Councilmember and current Irvine City Planning Commissioner Mary Ann Gaido agreed with Lin that the Council majority had completely ignored 50 years of precedent and procedures that made Irvine a world model for planning and lifestyle. “The Council’s rush to approve the multi-million-dollar projects certainly does not reflect Irvine’s highly-touted planning process, which has historically taken the time to study safety, traffic, noise, costs and quality of life issues,” Gaido said.