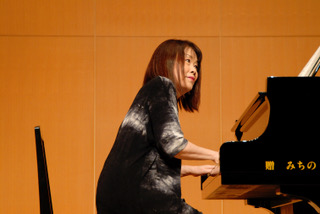 Recently, my wife and I attended a rare and thoroughly enjoyable performance by Mari Akagi, a renowned pianist visiting from Japan.  The concert took place at UCI’s Winfred Smith Hall.

Mari performed five solo pieces, each created by ‘modern piano’ composers. As a special treat, Mari’s brother Kei Akagi — a UCI professor — played piano while Kojiro Umezaki joined in on shakuhachi flute, which is a traditional Japanese bamboo flute. The program closed with a beautiful performance by Mari and her brother.

The term ‘modern piano,’ was created by various 20th century composers. It is characterized by a break with ‘traditional tonality,’ which a lot of audiences refer to as “classical” music. The first attributed composer of ‘modern piano’ was Bela Bartok (1881 to 1945).

Mari’s performance of “Suite for Piano op. 25” by Arnold Schoenberg was written using 12-tone technique. Schoenberg developed ‘atonality’ – music that lacks a tonal center or key or occurrences of pitches in novel combinations. If there is simple way to describe Mari’s performance, this is fairly close.

I had the pleasure of interviewing Mari during her visit. When she graduated from her studies in music, her piano teacher asked what she wanted to focus on. She answered, “I want to play modern music.”

Mari told me, “In order for you to be a professional interpreter of modern piano, my teacher told me that I must learn a minimum list of 30 compositions. There were 30 (compositions or composers) on the list in 1970. Today there are probably more than 70. Until now, I have performed about half of the list. Recently, I realized that I haven’t covered the most current generation. So now that I am getting older, I must focus even harder. This list has been a guide to both my own studies as well as teaching.”

Mari continued, “I can only work on one concert at a time. This concert took me a year to prepare. Some concerts take even longer. With music like this, it has to become part of you, and that can take a long time. You have to read it and understand it. That takes about 60% of the time. The last 40% is practice. This concert took 1000 hours of practice. After many years of this kind of music, I’ve gotten used to it.”

Mari told me that she selects pieces for her concert that are interesting to her, based on the structure and the concept, or the composer’s idea. She’s particularly interested in how the music uses the piano as an instrument.

When I asked about Mari’s experience on stage, she replied, “Performing on stage is the most important thing. Surprise comes when I am performing on stage, even when I have spent many hours on a piece. I hear a different story. I am often surprised what I didn’t discover during practice. Or I am disappointed. All sorts of new discoveries occur while playing on stage. It is probably most important for an artist. You learn about yourself and the music.”

Beyond performing her ‘modern piano’ pieces, the concert included a couple of extra sensations. A celestial duet rendering of Masao Homma’s “Jakkyo VIII” was performed with Kei on piano and Kojiro Umezaki on shakuhachi flute. In a voice that is so unique to the shakuhachi, Kojiro delivered an ethereal and haunting performance. A tonal range that I particularly enjoy. Following an intertwining path with Kei on the piano, they both transported us to ancient Japan in a Zen garden.

Saving the best for last, “Upon Reflection,” was composed by UCI Arts-Music Professor, Christopher Dobrian. He composed it as a duet for his friends Mari and Kei. If I had a chance to re-name it, I’d call it “Mischief Duo.”

The piece began with Mari and Kei sitting side-by-side, elbow-to-elbow at one piano. Then the skylarking started.  After a bit of keyboard work, Kei would rise and stand behind Mari. She’d sweep to one end of keyboard, then Kei would sit on her other side and rejoin her, occasionally reaching over her shoulder to play while still standing.  Like siblings looking for hidden treasures, they would romp up and down the keyboard. No spoken words, but the story was clear. The choreography of fingers, wrists, arms, and shoulders bustling over the piano was mesmerizing for the audience. This mischievousness showcased their individual virtuosity.

After the concert, Mari and Kei told me that they worked out the choreography themselves. Their motions were penciled into the written score for Dobrian’s piece. Mari said, “That was the most difficult part. We had to map out our body positions. That took a lot of effort.”

Mari is an exceptional pianist and, in my mind, a cultural treasure. Although she will play many of these pieces in the future, this particular concert was performed only one time at UCI. A year to prepare for an evening of magic.  I am so glad I was in the audience and urge you to join me for other extraordinary performances at UCI.