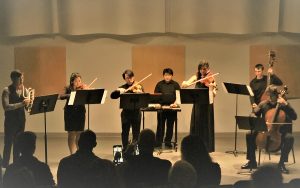 Have you ever thought about where new music comes from?  I have.  And what amazes me most is learning that the music I hear in movies, stage productions and even popular tunes on the radio is sometimes composed by a single musician who not only can play an instrument well, but who can also visualize and transcribe the score for every instrument in an ensemble or orchestra.  Every aspect of the score —the string instruments, piano, percussion, wind instruments, even vocals — is created by one talented artist.

Brandon Pozzo —a third-year student at Irvine Valley College (IVC) — is one of those talented artists.  His ambition is to run his own concerts in live performances.  Brandon believes that to do so he must not only study music theory and composition, he must compose his own work.

Recently, I had the good fortune to attend an event at IVC where Brandon presented five of his original compositions, and one rearrangement.  With only 100 seats in the rehearsal hall, my wife and I were lucky to find seats.  The place was filled, with standing-room-only in the back.  Along with everyone in the audience, we were thrilled to watch this young man present his musical creations.

“Everest,” the opening piece played by a four-person percussion ensemble included several chord surprises that one doesn’t anticipate.  Something that always delights me when I find them.  I am pretty certain that every composer has their favorite instrument.  Brandon’s is the xylophone.  His skills were masterfully displayed during the third piece, a solo titled “Beyond,” which was played partially with a violin bow drawn across the face of the bars.  For a few moments, the melody seemed to suspend the audience in time.

“Ice Dance,” a rearrangement from the film “Edward Scissorhands” was rendered with seven string instrumentalists and two vocalists.  The piece was complex, yet it held together nicely.

“Tango Melodica” was composed for seven instruments, including Brandon on the melodica. It was mild, yet forceful at points, and captivating throughout.  That piece seemed to reflect Brandon’s Argentine origin.  As I scanned the audience midway through the performance, I found everyone was wearing a smile.  A delightful melody you wanted to hear again and again.  I’ve included a link to a recording of “Tango Melodica” below.

For myself, the best part of the evening was being allowed to enter Brandon’s space.  In his own words, “it’s otherworldly, full of this energy.”

A critical aspect of a performer at any concert is stage presence.  Brandon says, “You have to convince the audience to think that you are serious about what you do.” Brandon didn’t have to convince us.  From the moment he stepped forward, he projected professionalism and charm. When asked about the actual process of writing music, Brandon responded: “I write phrase by phrase. I’ll start with the chords that I want and have an idea of where I need to be after each phrase.  Then I’ll write for all of the instruments simultaneously. I come up with the chords and ideas while working at a piano or a mallet percussion instrument.  For my melodies, I work with my viola; I find it easier to create melodic ideas with the viola because I can feel the phrasing a lot more.”

At certain concerts, I end up secretly yearning for the finishing chords.  However, on this evening with this performer, I didn’t want it to end.  And from the audience’s reaction, I was not alone in my desire to stay for more.

The new music coming from artists like Brandon illustrate the breadth and strength of the musical department IVC has built up over the past few years.  Brandon specifically acknowledged his mentors, amongst others, Dr. Stephen Rochford, Professor Emeritus, and Director Daniel Luzko, Music Theory and Composition.

IVC’s growing list of students who have gone on to make a name for themselves in the music world is impressive.  Many have received graduate degrees, won awards in music competitions, become faculty members in music departments, and taken positions in music production studios around the U.S.

Brandon’s recent performance was a stride towards what I personally believe will become part of his growing musical footprint.  One that we all want to see flourish.

I encourage you to join me at one of the next musical composition performances at IVC.  I can’t guarantee every event will be as inspiring as Brandon’s, but when you get the chance to watch an artist introduce new music, it’s an opportunity you don’t want to miss.

Below are the next two events featuring new musical composition: