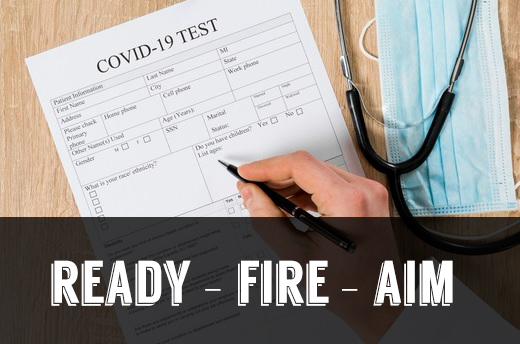 On May 12th, the Irvine City Council voted unanimously to approve a proposal from Councilmember Mike Carroll to launch a Citywide COVID-19 testing program, which was scheduled to begin on Tuesday, May 26th.

Like others in Irvine, I have watched the Mayor and City Council waste valuable time — February, March, and April — doing little to prepare our community while the coronavirus pandemic grew and, of course, began to spread throughout Orange County.  At last, in May, I was encouraged to learn that the Council would finally be getting its act together and begin implementing a comprehensive testing program so that residents could start to safely transition back to their normal routines outside of their homes.  When news came that the Council would be voting on the testing program, I eagerly tuned in to learn the details.

My optimism was short-lived.  During that May 12th Council meeting, I listened intently to the presentation by US Health Fair — the company hired by the Council to perform the testing.  As a medical doctor, I was very concerned by the lack of any discussion regarding the established public health elements of a truly comprehensive testing program.  It’s not just about testing for coronavirus.  The well-established mantra for controlling the pandemic is: test, trace, isolate and treat.  Irvine’s announced plan appeared to only include testing individuals for the coronavirus antigen, while providing an option to purchase a highly questionable antibody test as well.

Basic questions regarding the launch of an efficient and effective testing program were never asked by the Council, and little information was offered by US Health Fair.  For example, I would have expected the Council to ask US Health Fair representatives to provide the public with information regarding the organization’s protocols and experience with COVID-19 testing and the associated interventions when individuals tested positive.

There was no mention by the Mayor, City Councilmembers, or US Health Fair as to how those being tested in Irvine would be connected to a medical doctor to interpret the results and guide treatment.

In addition, the Council never indicated whether the new testing program would be coordinated with and approved by the State and the Orange County Health Care Agency to ensure that it is consistent with guidelines for our community.

Nevertheless, the Council went ahead and approved the US Health Fair testing program to begin two weeks later, on May 26th.

Immediately after the May 12th meeting, I sent a memo to the City asking a series of basic questions I felt needed to be addressed.  I never received a reply of any kind from the City.   (See the details of the memo in my previous article at https://irvinecommunitynewsandviews.org/irvines-covid-19-response-ready-fire-aim/)

As a grandmother, I am anxious to hug my grandkids again.  As a physician, I am eager to return to my schedule of meeting with patients one-on-one.  But as a UCI School of Medicine professor and an Irvine resident, I want to know that my City leaders are making smart choices that are protective of my health and the health of my neighbors.  Quite literally, these are matters of life and death.

On the day testing was scheduled to begin (Tuesday, May 26th), I called City Hall to find out where Irvine residents could get the City-approved COVID-19 antigen and antibody tests.  I was connected to the City’s COVID-19 hotline where I was informed that the details of the Council’s approved testing program needed to be “worked-out” at the next City Council meeting — which was scheduled to take place later that evening.

At the May 26th meeting, the Council admitted they hadn’t done their due diligence in vetting the company they had hired and that the testing program had been canceled…before it had even begun.  Listening to the Mayor and Councilmembers, it became clear that the City had not even consulted with the experts and researchers at UCI, who had set up their own program.

So, here we are heading into the fifth month of this pandemic and the City of Irvine — home to UCI, one of the most prestigious medical and scientific research universities in the world and a hub for major, cutting-edge medical and scientific organizations — has no plan in place for COVID-19 testing, tracing, isolating, and treating.  I find that unacceptable, and I’m guessing thousands of others in Irvine find all of this unacceptable as well.

Irvine has always been viewed as a well-planned community. However, the Mayor and Council’s failure over the past four months to plan any sort of strong, scientifically-based response to this global pandemic — beginning with a credible testing program — has not only damaged the City’s reputation for good planning; it has endangered us all.