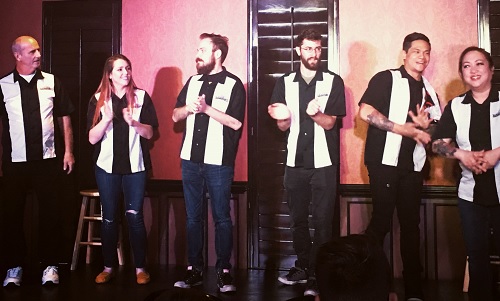 Recently, my wife and I attended the 7:30pm show at ImprovCity (located at 3415 Michelson Drive).  It was a bag full of fun. Driving home, we asked one another, “How do they do that?”

A few days later, I had the chance to sit down with Devin Dugan.  He’s the owner and Art Director (along with his wife, Gina who’s also in the cast).

Sitting across from them in their empty theater, Devin explained that improv is very different than drama because you can’t do it alone.  It’s reactionary.  Unlike other art forms, Devin told me that improv is about making everyone else look good.  It’s rare in that it is a selfless art form that builds on teamwork and trust with the audience.  Since there’s no script, obviously there are flubs. But, he said, “the cast succeeds or fails all together.  We’re making this up as we go along.” 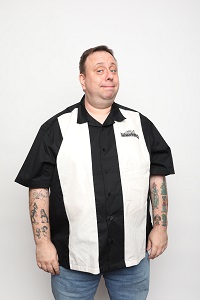 Devin’s got an impressive range of theatrical experience — acting, directing, screenwriting, and teaching.  He’s also been on an improv stage for over 24 years.  As you might expect when meeting someone with his background, Devin — who wears a smile as large as a catcher’s mitt — was engaging and very easy-going.

His roots — in the extensions of vaudeville, early TV, and cartoons — are displayed in the tattoo images covering his arms.  His right arm is festooned with stars such as Lucy & Desi, The Honeymooners, Laurel & Hardy, Bergen & McCarthy, Ben Turpin, Phil Silvers, Abbott & Costello, and the 3 Stooges.  On his left arm is a family of cartoon characters, including Daphne Blake, Jeannie, Huckleberry Hound, Dynomutt, Scrappy-Doo, Scooby-Dum, and others.  Seeing those tattoos made me realize I was in the presence of someone who thoroughly enjoys his career.

I needed to know this: “What do you prefer to call the members of your cast’? Comics? Actors? Performers?”  He replied, “Most people refer to us as comedians, but we call ourselves professional improvisors.” (More on that later.)

Currently, ImprovCity has a troupe of about 50, ages 18 to 70.  The cast is made up of teachers, manufacturing workers, lawyers, etc. ImprovCity also offers weekly drop-in training classes.

When I asked about the rules for improv, Devin explained, “The first rule is there isn’t a ‘No.’  One of the main principles of improv is the ‘Yes. And…’ rule.  For example, I tell you: “I’ve got a hot dog stand.”  You say, “And?”  Then I say, “We’re the worst hot dog vendors in the city.”  Anything you say after that is what we are stuck with.  But we’re always adding more onto it.  We take an idea and add.”

With ImprovCity approaching its 10th anniversary, I had to ask: “How do you keep this material fresh?”  Playfully evasive, Devin answered, “We never do the same show twice. We’re professional amateurs.”

Their early evening show was beginning in an hour and others from the troupe were trickling in, so Devin handed me off to two young cast members — Clayton Moore and Brady Cripe.  Clayton “folded into” ImprovCity in 2016 after being inspired by two other performers.  Brady, while pursuing a graduate degree in engineering two-and-a-half years ago, thought improv, “might be interesting.”

Although it was 2 against 1, responding exuberantly to my questions, Clayton and Brady ping-ponged back-and-forth.

Do you anticipate the surprise in an audience?

Clayton’s answer surprised me: “I don’t.  I want to be surprised first and foremost.  I’m surprised if the audience is surprised.  The audience is not even there for me.  I don’t know what’s coming.  I figure it out in the same second that they do.  You don’t have to think about it.  It’s kind of like a waterfall.  The water doesn’t choose where to come off the rock.  It goes over without having a plan.”

Was it a career goal of yours to become comedians?

Clayton: “Curiosity really.  It can become anything.  We aim to be comedians, but it doesn’t always hit and that’s what makes it fun.”

Brady: “In most people’s past, you spend so much time holding onto things in your career.  In improv, when you walk on stage, you really get to step away from all that.  There is no end goal. It’s just fun.”

Where does your inspiration come from?

Clayton: “I like making people laugh.  There is a lot of affirmation in this.  Making someone else happy makes me happy.  It’s pretty simple.”

Brady: “What makes it magical is I don’t know what’s coming after.  When you step out there, it can be anything.  You think you’re flipping eggs…and suddenly you’re an astronaut repairing the lunar module.  You could be anywhere.”

When people learn what you do, do they expect you to tell a joke?

Clayton: “Geeze, I hope not!  I don’t like jokes.  In a conversation, jokes are just these weird little blips that you have to reset the conversation after the joke.”

Brady: “What I admire are these one-liners, buttoning it together in little comedic notes.  Sometimes you expect people to bite into it but not everybody is wired that way.”

Is a comic different from an improv performer?

Brady: “With a stand-up comic, people are sitting there thinking, “Make me laugh.”  The pressure is insurmountably high.  It’s rehearsed.  It’s timed. With improv, it’s more of, let’s see how far this goes.  There is no real pressure.”

Clayton: “We don’t actually promise the audience anything.  The bar is very low.  The bar is on the stage and we just step over it.”

How long do you expect to stay with this?

Brady: “I don’t think anyone ever says I’m done with this.  I’m putting it down for good.  It never ceases to be fun.  So why would you ever stop that?”

Before I departed, I asked Devin the same question: “How long are you going to do this?”  Devin’s response was unequivocal:  “I’ll do this until I can’t do it anymore.  I’m like a little kid up here playing make believe every day.  I really get to play.  It’s never the same act twice.”

You will find ImprovCity sharing the site with Boomers on Michelson Drive.  In the mezzanine above the 40-lane Irvine Lanes, their home is a 75-seat “black box” theatre in repurposed meeting rooms.  About four evenings a week, they host two shows.  Tickets range from $7-$12 per person.

I urge you to join them in what I think is one of Irvine’s diamond-in-the-rough theatrical treasures.  Like popcorn, it’s fun and you can enjoy a handful at a time.

If you are near the Woodbridge High School drama department this summer, you may meet Devin.  He’s volunteering his time to direct their October production of the musical, Les Misérables.