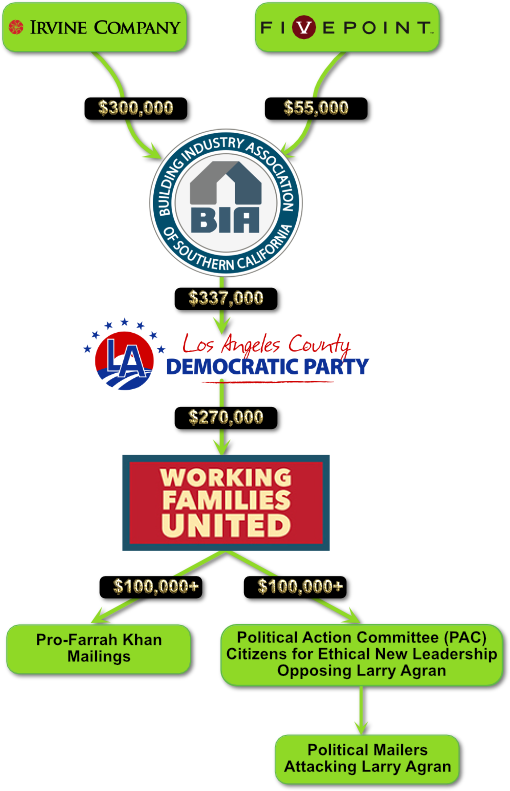 Apparently, Councilmember Larry Agran is the one member of the Irvine City Council that big developers fear the most.

An Irvine Community News & Views investigation shows that a huge influx of “dark money” — funding an unprecedented deluge of political “hit piece” mailers against Councilmember Agran— originated from the two largest developers in Irvine: The Irvine Company and FivePoint.

So far, $355,000 from the developers has been funneled to the Building Industry Association of Southern California PAC (BIA), which then transferred the money to the Los Angeles County Democratic Party. The Party then sent a large portion of the money —  $270,000 — to a PAC (Working Families United), which has close ties to disgraced Democratic campaign consultant Melahat Rafiei and Irvine Mayor Farrah Khan. (Rafiei and Khan are the subjects of an ongoing FBI investigation into corruption in Irvine.)

Agran has long been a target of developers and special interests because of his history of fighting to limit the size and impacts of new projects on Irvine’s neighborhoods and City services.

Since returning to the Council in 2020, Agran has clashed with Khan and her appointed Vice Mayor Anthony Kuo on a number of issues, including the City’s slow and weak response to the All American Asphalt operations and the threat posed to public health. Agran has also clashed with Khan and Kuo over the Orange County Power Authority fiasco, and the backroom dealing regarding several projects and multi-million-dollar contracts that have been hastily shoved through the Council by Khan and Kuo.

The Irvine Company and FivePoint have spent decades attacking Agran while promoting Council candidates who will rubber-stamp their development projects. In fact, the developers provided hundreds of thousands of dollars in dark money campaign support for Kuo in his first election and appear to be doing the same this year. (Kuo is currently running for Council against Agran.) 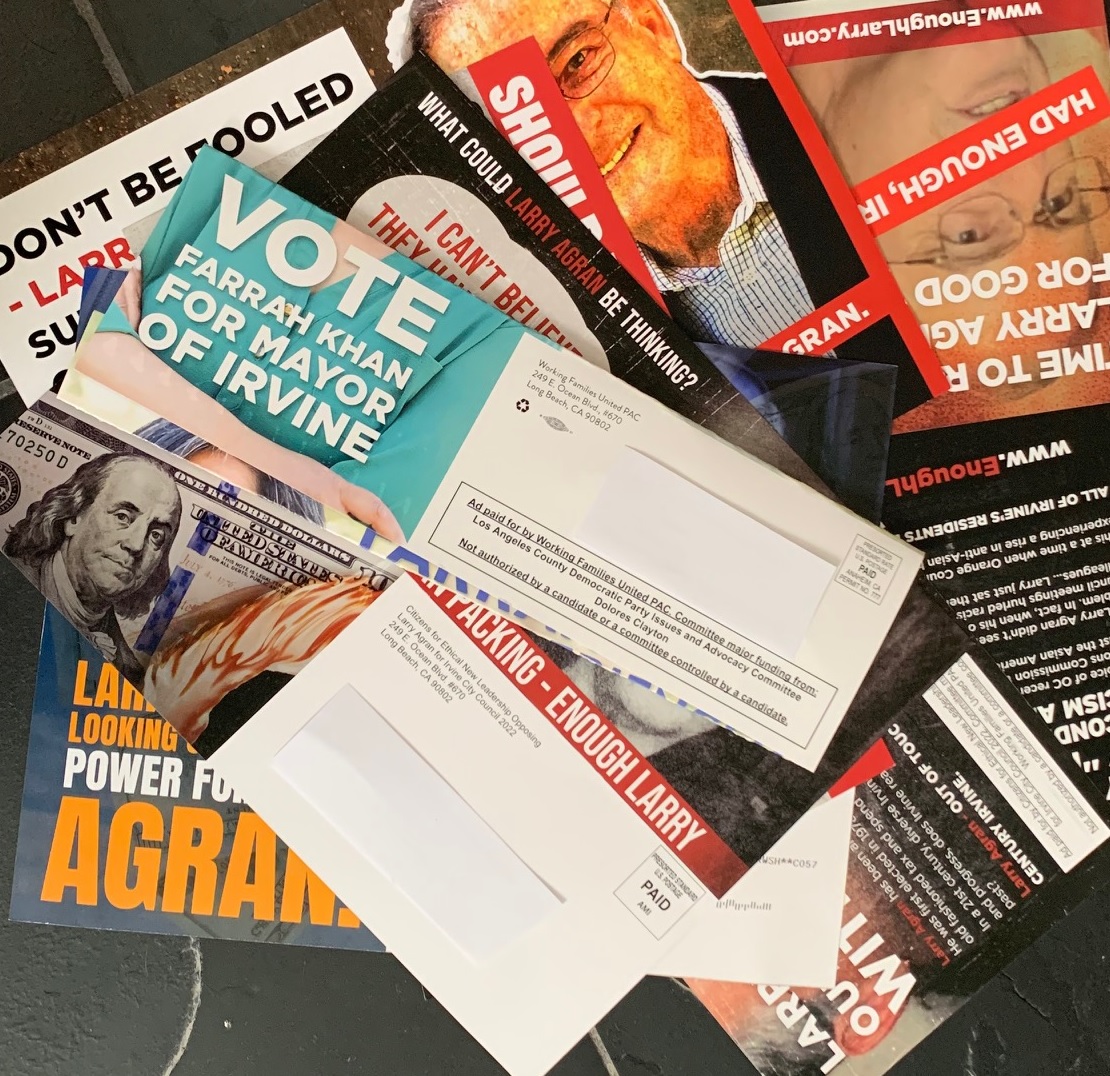 As the saying goes, “Follow the Money.”  In this case, that meant reviewing dozens of campaign spending reports, some only filed just this week, to re-create the torturous trail of hundreds of thousands of dollars funneled through a maze of political action committees (PACs).

The money trail began with the developers’ $355,000, which sat in the BIA account until just the past month or two when the BIA contributed $337,000 to the Los Angeles County Democratic Party (LACDP). One of the LACDP members is Cory Allen, a former employee of Rafiei and Khan’s former City Executive Assistant. Allen also served as Mayor Khan’s 2022 campaign manager until he was forced to step down after news of Rafiei’s arrest for attempted bribery of two Irvine Councilmembers was made public.

The LACDP then sent $270,000 to the Working Families United PAC (WFU), whose treasurer is listed as Gary Crummitt, Khan’s current campaign treasurer, who has also been treasurer for many other campaigns run by Rafiei.

WFU then contributed at least $100,000 to a brand new PAC — ironically named “Citizens for Ethical Leadership Opposed to Larry Agran for City Council 2022” — whose filing with the City of Irvine lists Crummitt as its treasurer. Almost immediately, the hit pieces began raining down on Irvine, all paid for by the new PAC. Meanwhile, WFU has been producing bright and cheery pro-Khan mailers that have also flooded Irvine mailboxes.

When asked for comment, Agran stated: “I’m used to being attacked by developers and big special interests — it happens every election cycle because they know I’m working for the residents in Irvine, not for developers who expect Councilmembers to rubber-stamp their projects. But, this year has been unprecedented in the sleaziness and volume of attack mail. This is supposed to be a local, nonpartisan election, but obscene spending by developers and LA political bosses — who don’t care about Irvine — are damaging our local democracy.” Agran added: “I still have faith that Irvine voters will see through all of this.”

Agran’s campaign released a video responding to the attack mailers. (Click here to watch the video.)

Khan, Crummitt, and the LA County Democratic Party Chair did not reply to emails and voicemails requesting comment.