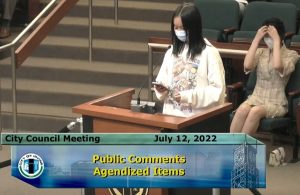 North Irvine residents turned out in force Tuesday, pleading with the City Council through nearly three hours of public comments to take action against the All American Asphalt plant that for years has been blanketing their neighborhoods with foul odors and insidious airborne carcinogens. They were rewarded with a four-pronged measure introduced by Councilmember Larry Agran and passed 5-0 after much discussion.

Saying he wants to “build a fire under everybody” to get action, Agran’s measure aims to get the plant either closed by the end of the year or its operations restricted pending relocation as soon as possible.

“It’s an urgent situation,” said Agran, who has repeatedly over the past 18 months tried to get the Council to take up the issue in public but to no avail because none of the other four Councilmembers would support his requests until now. “I regard AAA as a bad actor … behaving in a way that endangers our community. This plant is emitting huge quantities of benzene, formaldehyde, VOCs (volatile organic compounds), you name it.”

Agran’s motion as amended after Council discussion directs the City staff to:

Agran said his intent is to implement “old ideas better and faster, and do some new things too.”

“It’s a step in the right direction,” said Tom Hazzard, a Northwood resident who has been very involved in effort to shut the plant. He was encouraged that the entire Council was engaged in the discussion, not just Agran, he said. “It’s getting to the point where the Council and the City know they have to do the right thing — it’s just a matter of how to get there.”

Indeed, the action came too late for Kim Konte and her family. For several years, Konte has been trying to track the health effects of the plant on her Northwood neighborhood and the others nearby.

Konte’s sons attend Northwood High School and a close friend of theirs died of a rare brain cancer in May. She said two other Northwood children have received cancer diagnoses in the past week. This, for her, was the last straw.

“The City of Irvine has failed to uphold citizens’ right to clean air,” she said after the meeting. Konte said she has decided that because the City has acted so slowly, when it has acted at all, the risks to her sons are too great to stay in Irvine, so they’ll be moving soon.