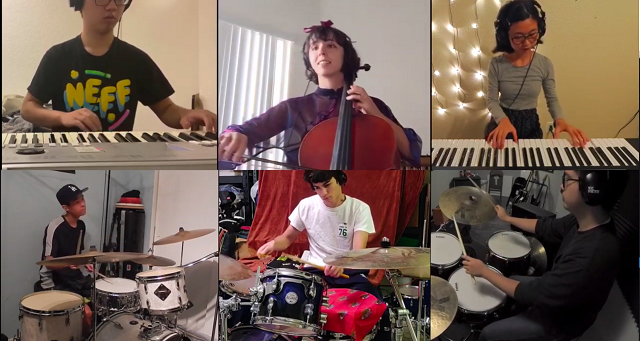 In late May, UCI’s Clair Trevor School of the Arts (CTSA) presented their second virtual “Jazz Small Groups Concert.”  (Brief explanation: ‘virtual’ means the players are not performing in a theatre: they are heard and seen using an array of technology gizmos and plenty of Internet magic dust.)

Disclaimer: With virtual concerts, there is a very slight lag-time between hearing a note played and seeing the musician play the note.  It’s not a technical glitch — it’s just an aspect of attending virtual concerts.  As the concert progresses, you absorb the lag.

Chancellor’s Professor, Kei Akagi, who specializes in jazz studies and piano, shared this reflection regarding the current year: “The pandemic and lockdown has forced us to really think how we create music together.  Earlier in the year, just so we could give lessons, all of us were searching in the dark for solutions.  Once we started getting the lessons sorted out, using various computer solutions, we felt we could put together our first virtual concert.”

Missing live theatre, I’ve found myself suffering from musical hypoxia (loss of brain function due to insufficient oxygen).  These virtual concerts have been like opening a window, providing me with much-needed musical “air.”

The concerts are a combination of pre-recorded solo and group performances.  So, the setting is not on-the-stage live.  But I have found definite advantages.  First, each musician records their portion just for this one concert.  Nothing at the concert is “in-the-can.”  While in front of a live, often-vacuous stage, no matter where you are seated, during a virtual concert you appear to be at the musician’s feet.  If they’re on percussion or piano, you’re at their elbow.  Somehow, it allows for a much more intimate concert — as though the musicians are playing just for you.  You can also quickly dash to your refrigerator for a snack whenever you want.  And, there is no charge.  (When registering, you are invited to make a small contribution.)

Most importantantly, the performers are all very talented jazz students.  These promising musicians need to be heard today!

15 months into the pandemic, I wanted to learn how music students are being impacted.  I’m happy to report after speaking with a couple of these talented students, their response was encouraging. 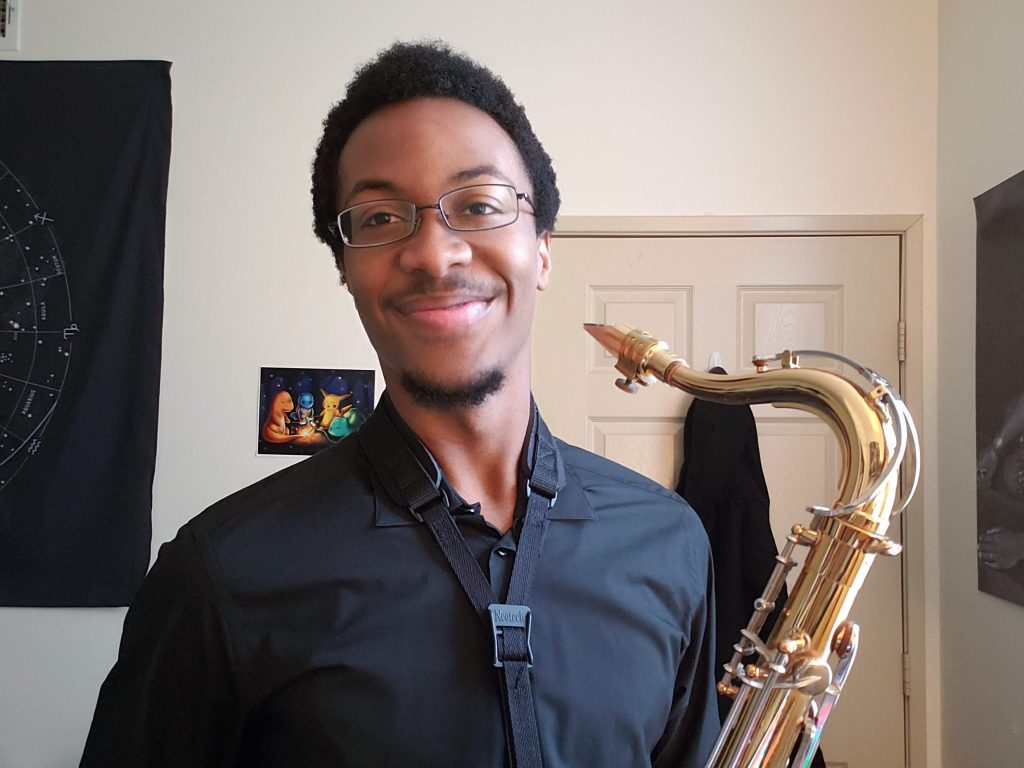 Matthew Nelson, in his 3rd year of jazz studies, aspires to become a professional sax performer.  Having last heard him play prior to the pandemic, I was eager to witness his development.  The March 3rd virtual concert opened with Matthew playing his original composition, “This is for Chick.”  The recent death of Chick Corea, a significant jazz composer and pianist, provided Matthew’s inspiration.  Matthew has presence and a convincing command of his instrument.  It was a pleasure to hear this.

When I asked Matthew if 2020/21 will be a blank chapter in his musical career journal, his response was alarming at first: “This past year was a very different setting, for all students and working musicians.  Once the pandemic started, work for musicians came to a screeching halt.  No in-person lessons, no in-person rehearsals, all performances were canceled.  The first semester was a hodgepodge.  Professors had to re-work their teaching pedagogy overnight.”

Later in our conversation, Matthew brightened the picture: “Our faculty is very knowledgeable when it comes to technology.  They created a ‘Sonobus’ program that we used to practice and coordinate music from separate locations.”  (SonoBus is a free and open source application for high quality, audio streaming over the Internet or a local network.)

Matthew concluded by saying: “This year gave me an opportunity to diversify what I do in music.  Pre-pandemic, I didn’t mix or master or use a DA (Digital Audial) workstation.”

UCI’s distinction as a “research university” is well known.  Now, I’ve learned how that distinction impacts UCI’s Jazz students.  UCI is one of the few music schools that has taken on the challenge of producing virtual concerts.  That brings me to Michael Dessen, Ph.D., composer, producer, technologist and teacher.  For the past decade, he has been a leader in the “telematic music scene” — coordinating music performances from separate locations over very long distances.

During the pandemic, Michael was ‘that man behind the curtain.’  Everyone I spoke with attributed a key role to Mr. Dessen, who had been lending equipment, testing, and reaching out to students.  One student, Nick Ezpeleta, said that, by combining the Internet with his custom programing skills, Mr. Dessen had “kept the boats afloat.” 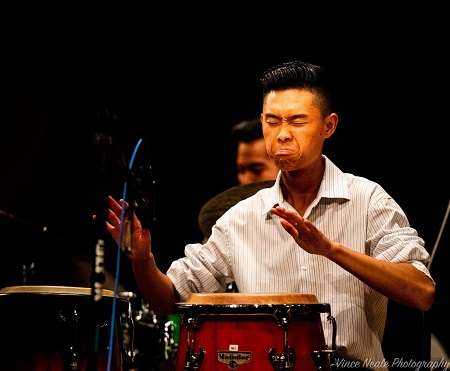 Nick was the next jazz student to enter my virtual stage.  It’s a rare jazz group that doesn’t have a drummer.  Nick is in his fourth year of jazz studies at UCI, aspiring to become a professional musician.  During our conversation, Nick told me: “This last year was a very different setting.  A lot of pre-recorded material had to be exchanged.  So, each of us had to convert our personal space into a recording studio, with a microphone, audio interface, headphones, and a digital audio workspace.  Everyone needed more technology.”

Naturally, I had to ask Nick if he felt the past year had been wasted.  His response was enriching:  “I definitely learned new skills.  Things that I would have had to learn outside of school.  I’ve learned to be a studio performer.  Mostly, it has taught me to keep an open mind.  Having to record, and then submit these to a professor, I definitely learned a lot about the limits of my patience.”

How do four or five musicians, living in separate locations within the LA/OC area, perform a jazz combo over the Internet?  Without relying on the visual cues from their fellow players, how do they even stay on the same beat?

Matthew Nelson filled me in: “That’s been a major issue.  The music, a lot of the time is elastic.  My strategy, because Zoom has latency, is to just close my eyes, set my headphones, cut out the Zoom, and just hone in on the auditory.”

The combo leader, Darek Oles, who lectures at UCI and plays base, first creates a basic track and then sends it to the other musicians.  They overdub their parts.  Finally, these recording are compiled and edited, creating the final ‘virtual’ results.  In fact, the students can record their part at whatever time is convenient.  Although for the combos, the musicians may not actually be playing simultaneously.  However, the final result is an amazing feat.

When closing my call with Kei Akagi, he added: “Although the students now can’t bond with the audience, they’ve learned to find their own way to communicate with other players and the faculty.”  After attending their first concert, I think he’s correct.  It satisfied my craving for a breath of musical fresh air.

Link to Kei Akagi’s, “The Dog and The Snake”