Over the past several years, the UCI Symphony Orchestra has delighted me with many exhilarating performances. 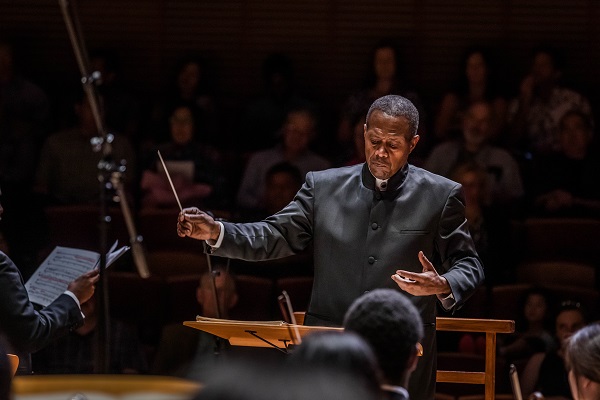 Maestro Dr. Stephen Tucker is the newly appointed Chair of the Music Department at UCI (Marjorie Rawlins Chair of Music).  This comes on top of Stephen’s comprehensive career of conducting accomplishments.  Along with teaching conducting, he also teaches orchestration and music analysis.

I recently had the opportunity to sit down with Stephen.  Spending an hour in a one-on-one discussion with him was a rare delight.

As an audience member, I began by asking Stephen to explain exactly what the conductor is doing when standing in front of the orchestra. Stephen explained that the conductor’s job is to take “musical thought and musical ideas to the performers and to the audience through physical motion.”  He then added a comic illustration, quoting his twin brother — Dr. Paul Tucker, Director of Choral Activities at the University of Kansas — saying, “If I have to stand on my head and twitch my butt to get you to play well, that’s what I’ll do. Anything that helps them understand what the musical idea is.”

I also asked what Stephen what he looks for in students who hope to become conductors. His answer was like glimpsing through a window, briefly opened.  He told me, “The part that I don’t know about you is the most important part, which is your acuity — your musical ability to grasp and think about music in a very creative and informative way.  If, as a conductor, you can’t get the players to be inspired by the ideas you convey to them, you cannot bring musicians to another level.”  He concluded by saying, “It’s my way of saying that you have to come to the task knowing that you must think. Any monkey can learn the motions.”

When I asked Stephen how far in advance does he begin preparing for each symphony concert, he told me, “I will start thinking about a performance 3 to 4 years in advance.  Who will be the soloists?  I like to expose both the students and the audience to internationally recognized soloists.”  This is a responsibility that Stephen fully embraces. During UCI’s Symphony concert this past June, he included the world premiere of Dreams of the Recovery Period, composed by UCI alum Jason Barabba.  Stephen also recruited a pair of soloists, the internationally renowned clarinet duo AdZel (Mariam Adam and Stephanie Zelnick). 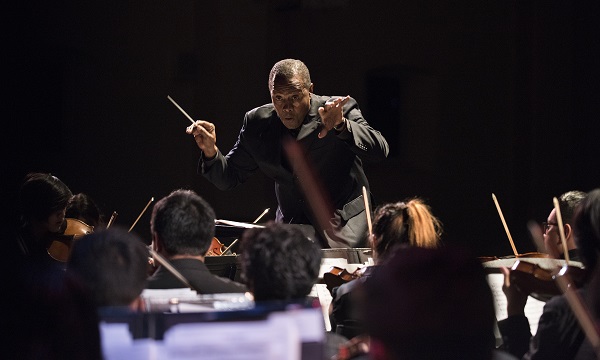 Currently, UCI has 155 students — undergraduates and graduates combined — who have chosen music as their major.  Beyond perfecting their musical skills, these students face an additional challenge.  In Stephen’s words, “UCI does not sell itself as a performance university.  UCI is designated as a research university.  Not a music college or school.”  This means students carry a full academic load, which creates a real challenge to staff an orchestra requiring 90 to 100+ musicians.

When asked how he pulls together enough musicians for a full-on symphony, Stephen explained, “In this community there is a broad range of skilled musicians.  There are faculty members who are excellent players and I encourage them to participate.  So, I send out the call and they come.”

Next, I asked Stephen how he creates a program if he doesn’t know ahead of time the skill levels of his students.  Stephen’s heard this question before.  His answer illuminates his true mission.  “That’s my job!  Obviously, my students are not the New York Philharmonic Orchestra.  I have to know that they are giving me what they can.  Which most of the time, is around here.”  Stephen placed his hand just above his knee.  Then, he said, “If I can move them to here,” his hand now at shoulder height, “I will have some modicum of success.  I am always aiming for this higher level.”

Though I love the symphony, jazz is my personal musical passion, so I asked Stephen to compare the two genres and he made an astute distinction.  He said, “In the symphony setting, the music is not more complex.  However, it requires more attention to established detail.  With jazz, the musicians are creating, while we in the symphony are recreating.”  When I attend the next UCI big band concert under Bobby Rodriquez, this will be in the back of my mind. 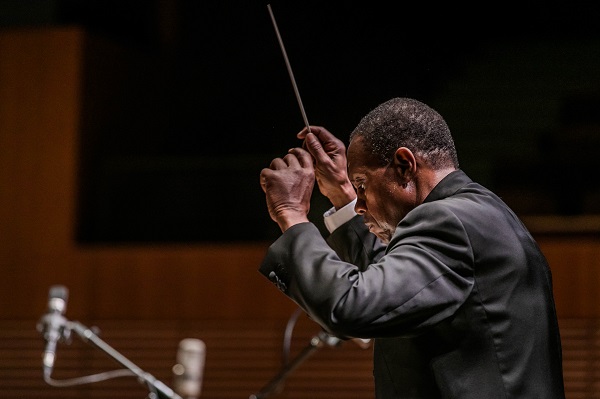 I always enjoy asking musicians if they are ever surprised during a performance. “It’s amazing how frequently that happens,” Stephen quickly responded.  “During the first concert of the year (in November) I am so delighted to see that the students have come together, for the first time, so quickly. I don’t anticipate this because I don’t want to jinx it. But they will do it.”

Stephen revealed that during a concert, “sometimes I will manipulate the music — change tempo, change place holds. When I tell that to a musician, they cower.  Yet they are usually right with me.  This is always a terrific surprise.  When we accomplish that, you can see it in their eyes.”

In closing, I complimented Stephen upon his recent appointment as Chair of the Music Department. Stephen replied, tongue-in-cheek, “I’ve yet to prove that.  This is my first term — my first sentence.”  Everyone who knows him has little doubt that he will accomplish even greater things under his — hopefully — extended ‘sentence.’

Here’s something to look forward to:  If you are planning on attending one of the upcoming UCI Symphony performances at the Barclay Theater, be sure to arrive 30 minutes early.  Stephen’s usual practice is to wait in the lobby prior to the start of each concert, eager to respond to any of your questions.

Under the very skilled Maestro Dr. Stephan Tucker, attending the UCI Symphony Orchestra is a wonder.  See the link below to UCI’s first symphony of the year in November.  And I hope to see many of you with me in the audience.