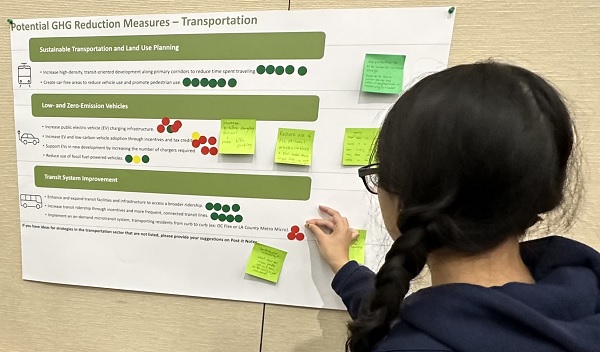 During the community Climate Action Plan meeting, an attendee adds a sticker reflecting her priorities in the area of transportation.

If you schedule it, they will come. The City of Irvine, which was recently scorched at a City Council meeting by environmental justice groups for the slow pace of its Climate Action and Adaptation Plan (CAAP), held a public meeting on December 6th to gather citizen input on the plan, and some 60 Irvine residents showed up to offer their views and suggestions.

Attendees heard a brief presentation by City environmental staffers. The City’s greenhouse gas emissions will fall by 29% with no City action, they said, because of state and federal mandates. The state target, however, is 40%, and the City has set a target of being carbon neutral by 2030. That goal will require action at the City level.

Attendees were then invited to weigh-in with their own views on climate action. They did this by perusing large posters around the room that listed a variety of proposed City actions to fight climate change. They were instructed to place colored stickers indicating what priority they thought the ideas should have.

Attendees were also provided sticky notes to leave comments or suggestions on the posters. The result was like a modern art installation, colorful and thought-provoking.

Expanding public transit and incentivizing its use drew a lot of green (high-priority) dots, while the idea of curb-to-curb on-demand transit drew a contrasting cluster of red (low-priority). UCI students were there to push bike infrastructure, and peppered the section on electric vehicles with red dots and colored notes saying “more bike parking” and “reduce all personal vehicle use.”

A board asking, “What is the City of Irvine’s biggest climate challenge?” drew a couple of dozen responses, from the practical (“too many cars”) to the intangible (“corporate delay”).

Irvine resident David Montgomery said he thought the meeting was a good one, noting: “I have some hope, actually, People are starting to see it.” He said he was also encouraged to be in “a room of like-minded people.”

Linda Kraemer — who is one of 60 members of the local Climate Action Project chapter — agreed the meeting was helpful, saying: “You’ve got to get people together in a room to get things done….You have to have a lot of citizens involved or it’s not going to work.”

Selene Lawrence, the City’s senior energy and sustainability programs analyst, said the City is in the assessment phase of the CAAP, determining what the current situation, challenges and opportunities are. The public’s level of commitment and its priorities are an important part of that, she said. “Next, we will be setting targets,” she said. “That’s also a community-based effort.”

The goal of being carbon-neutral by 2030 is “aspirational,” Lawrence acknowledged, adding that it’s important to get the public and other stakeholders involved and on board to achieve that goal.