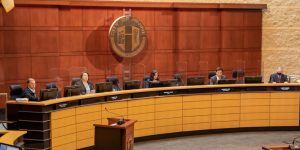 For eight hours on July 26th, the Irvine City Council sparred over several critical issues that likely will dominate the November City elections. The battle lines were clearly drawn.

Each agenda item gave rise to passionate public comments (the vast majority in favor of Agran’s positions), sharp exchanges on the dais, and some squirming by City staff members caught in the crossfire.

Agran is running for re-election in November, as is Councilmember Anthony Kuo, who sided with others at the dais to vote against each of Agran’s proposals.

Here is what the Council decided:

Veterans Memorial Park
Meeting as the Great Park Board in the afternoon, the Councilmembers heard a lengthy presentation by City Manager Oliver Chi of a newly created “framework” for the further development of the Great Park. The framework plan includes a wide variety of proposed public uses — from a 14,000-seat amphitheater to an elite water polo/aquatics center to a vast botanical garden. The proposed botanical garden was the flashpoint, as it effectively replaces the voter-designated Veterans Memorial Park & Cemetery on the 125-acre Great Park “ARDA” site.

The current Council majority has all but abandoned plans for a Veterans Memorial Park — there is only a 5-acre patch dedicated to honoring veterans in the botanical garden plan. Despite objections from public commenters and Councilmember Agran that the plan violates a citizen initiative enacted two years ago and is a slap in the face to veterans, Kuo joined Mayor Farrah Khan and Councilmembers Tammy Kim and Mike Carroll to endorse the framework plan on a 4-1 vote. Agran voted NO.

Orange County Power Authority
City Manager Chi reported on the status of a City audit of the power agency, saying the staff had only that morning received from the OCPA a few of the many documents requested back in June to conduct the review.

Agran asked whether the City had a chance to review notices scheduled to be sent out beginning August 1st to Irvine residents, notifying them of the October 1st switch of their electricity provider from Southern California Edison to OCPA. Chi said he understood those notices were at the printer and City staff had not seen them.

Agran said that last spring, OCPA did not give Irvine business customers information about their options, including their right to “opt-out,” when it launched its service on April 1st. Agran expressed concern that proper notices — including disclosure of higher electricity rates — will not be sent to Irvine residents.

Agran stated: “This entity is failing to do its job. It is a failing entity, and I want someone to prove to me otherwise.”

As Agran spoke, City Attorney Jeff Melching interjected that OCPA was not an agenda item and so the Council could not discuss it. Agran protested that the City Manager’s report was on the agenda and that he had a right to ask questions about it, but Khan moved the meeting to the next agenda item.

All American Asphalt
Agran noted that current negotiations with All American Asphalt about relocating its plant outside of Irvine, even with the most optimistic timeline, would allow the plant to continue operations at the current site for two years or more.

He noted that using eminent domain to acquire the plant would take the City about nine months, and that every day nearby residents are being exposed to plant emissions of known airborne carcinogens. Agran proposed “condemnation of the All American Asphalt site.” His motion continued: “The envisioned condemnation will be for the following public purpose — to improve and extend Jeffrey Road for transportation and wildfire evacuation via State Route 241; and to create a conference and training center that will serve as a gateway to the northern open space and a facility for the prevention, detection and control of wildfires.”

Kuo moved to table the matter until a September Council meeting, and the motion passed 3-2, with Agran opposed because he wanted immediate action.

City Regulation of Air Quality
In response to an inquiry at the last Council meeting by Agran, who is an environmental defense lawyer, City Attorney Melching confirmed Agran’s claim that it is possible for the City to work with the South Coast Air Quality Management District (SCAQMD) to enact its own air quality standards that would be stricter than SCAQMD’s standards. This, in turn, would dramatically reduce the air pollution emanating from the All American Asphalt plant.

Agran moved to begin that process, and it was seconded by Khan, but it failed on a 3-2 vote with Kuo joining Carroll and Kim to kill it.

District Elections
Agran moved to place a measure on the November ballot for Irvine voters to decide whether to transition to a seven-member City Council composed of a Mayor elected at large and six Councilmembers elected from separate geographic districts. Khan seconded the motion.

Kuo joined Carroll and Kim in a 3-2 vote to keep the measure off the ballot.