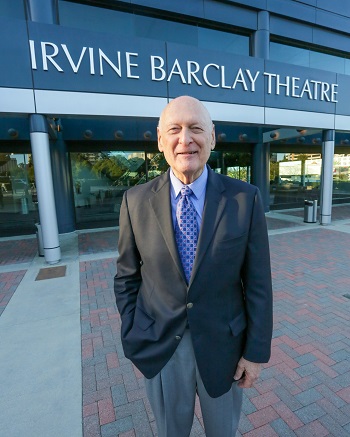 In 1990, the non-profit, 750-seat Barclay Theatre opened as a collaborative venture — owned by both the City of Irvine and the University of California, Irvine.

Flash-forward to 2020 when the COVID-19 pandemic turned out the lights in theatres all around the world. Some, forever. Yet, the pandemic was not a show-stopper for the Barclay. That’s because for the past six years, the Barclay’s president has been Jerry Mandel, a self-described “Theatre Rat.”

Our story really begins back in 2006, which was the year Jerry retired after a nine-year run as the President of the Performing Arts Center in Costa Mesa. As a surprise, Jerry’s wife gave him a saxophone. The gift came with a “be-careful-what-you-wish-for” twist.

Jerry’s love of music dates back to his childhood. When he entered Culver City Junior High School, all students had to take beginning band. He explained: “I walked in and they handed me a saxophone.” He went on to study at Santa Monica City College where he aspired to become a musician. Jerry told me: “In those days, there were only two strong music departments. You either went to Santa Monica City College or LA City College. The big band groups would come through and pick guys up. I realized about a year in that I didn’t have the chops to be a successful musician, so I switched to academia.” Jerry’s days of playing saxophone were put aside until he received the surprise gift from his wife.

It just so happened that when Jerry retired, he learned that UCI Dean of the Arts, Alan Terricciano, needed an advisor. The job was perfect for Jerry. Alan reached out, and Jerry accepted — with one unusual hiring request. Jerry told Alan: “I don’t need a salary. What I need is a practice room for my saxophone. If I don’t find a practice room, I’ll need a divorce.” Alan handed him a key to a room in the basement of the UCI Mesa Street parking garage.

Now, fast-forward to 2015. Jerry’s in his practice room. The new UCI Dean of the Arts, Stephen Barker, unpredictably finds a hole in his organization chart when the tentative new president of the Barclay decided to decline UCI’s offer. Stephen reached out to Jerry, asking: “Would you take the job for three months?” That was six years ago. Jerry’s been the impresario at the Barclay every day since he agreed to that initial “three-month” stint. 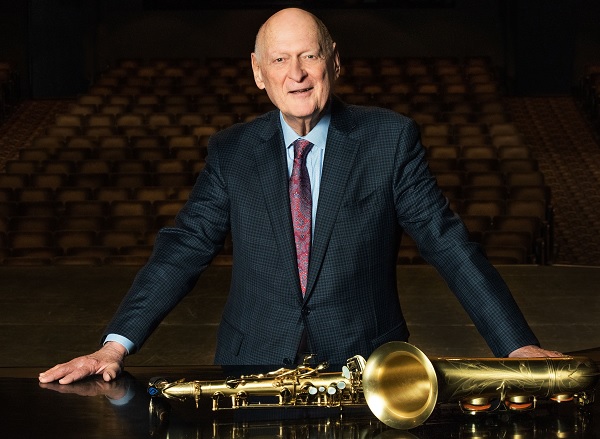 Photo of Jerry with his beloved saxophone (taken by Doug Gifford)

Things were going great until the pandemic struck in 2020. When we went into lock-down, Jerry says: “My board members thought I should lay people off. I told them I have core values and needed to go on just being who I am. Anyone who works for me is family. I learned that from my dad. The staff had given their life to this place, and I don’t believe in laying people off. If you want me to do that, then I’m gone. We’ll figure out how to get out of this.”

The board was initially unhappy with Jerry’s ultimatum, but they came around. Everyone took a pay cut while Jerry continued his fundraising campaign. He said: “I called all of our donors. At first, they were afraid to return my calls. But people slowly came on board. We got a lot of PPP [Paycheck Protection Plan] funding. But, it was a chicken-and-egg problem: you had to keep your staff to get the funding. Nobody got laid off … and we finished the year in the black.”

And there’s more. At the beginning of the pandemic, Jerry announced: “We’re gonna go to work.” They painted the entire theatre, installed new seating, new carpeting, and a new air filtration system. They also made additions to the sound systems.

Jerry envisioned even greater objectives, saying: “The Barclay is moving in a new direction, with a whole new concept regarding how we stage shows and how we pay for them. Now, we can present our shows outdoors. For example, there is a new site at the Great Park. We’re also planning an outdoor venue near The Barclay.” 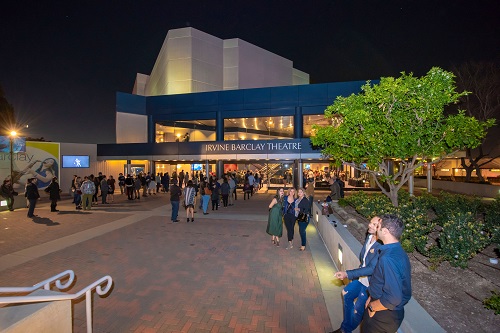 While others might boast, Jerry simply explains: “We were very busy and we were making money.” Throughout the pandemic, the Barclay has continued to hold private concerts. For example, American soprano, Renee Fleming, performed under the Barclay’s banner at the Irvine Barclay Theater Chang Hall earlier this year. With their new physical distancing policies, the Barclay has also been able to host a string of concerts with the Philharmonic Society of Orange County. And, the theatre was provided as a rental site for dancing academies. Jerry concludes: “We set the money aside: We came thru the pandemic fine.”

If you’re thinking about going into the theatre business, here’s a little guidance from the Barclay’s premier impresario. Jerry says: “It’s like a restaurant: you’ve got to be there every day. I’m here when the crew comes in. I like to be in the theatre during sound checks, and when the lighting is being tested. I love that part of it. If you’re there, the crew performs a little bit better.” Like people who spend most days at a gym, Jerry calls himself a “theatre rat.”

Today, Jerry says the theatre is in really good shape, with a full Spring program ready to go. With a gleam-in-his-eye, Jerry reveals, “I worry about this at my age in life. Am I staying too long? You want to leave, before they want you to leave.” 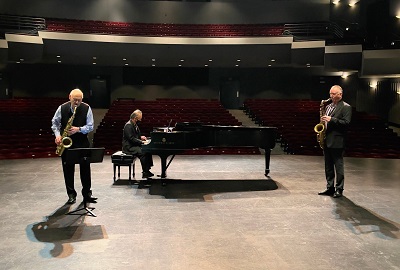 In addition to his duties at the Barclay, Jerry is also a member of the award-winning jazz group, the Irvine Barclay Theatre Jazz Band. Jerry’s musical aspirations are finally being realized. For the past two years, Jerry has been playing tenor saxophone with Ron Kobayashi (keyboards), Baba Elefante (bass), Steve Kixon (drums), and Tom Bevan (guitar).

The band performs a few nights each week at either the Bayside restaurant in Newport Beach, or at Bistango here in Irvine. The results are an easy-to-swallow rendering of jazz favorites, old and new.

Jerry always casts his role in a larger sphere, saying: “Playing is such a great mental reinforcement. It enables me to get away from everything else. The other players are good. We do a lot of charity work as well, 4 or 5 times a year. You know, I’m never going to be John Coltrane, but the music is my therapy. If I didn’t have that, I’d need a therapist.”

Jerry closes our interview wistfully by saying: “It’s funny to be at this age because you really don’t plan for it. You plan your whole life: school, career, marriage. All of a sudden you wake up one day and you are way past your charm. Your friends aren’t with you anymore. What is it you are supposed to do? One of the biggest challenges is to stay relevant.”

Over the past several years, I’ve watched Jerry introduce performers at the Barclay and I’ve enjoyed listening to him perform as part of the Irvine Barclay Theatre Jazz Band. During my interview for this article, we’ve had the pleasure of sharing a cup of coffee. Jerry may have graduated from Culver City High School back in 1957, but he certainly doesn’t have any problem remaining relevant. In fact, he could lead seminars on the subject.

Remember the key to the practice room? Jerry’s still got it. He says: “Who knows? 10 or 20 years from now, I might need to use that practice room again.”

Below are a few links you may enjoy: