Below is the first in a new series of articles:  Previews, Reviews & Venues.

ICNV contributor Terry Schilling will be showcasing the amazing music and theatrical talent offered at no/low cost through productions at our local colleges and universities.  He’ll also spotlight many of the incredible venues across Irvine. 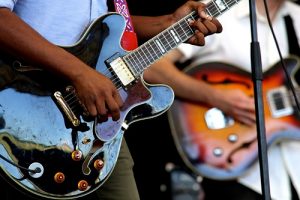 My wife and I attended Concordia University Irvine’s FREE Jazz Ensembles concert on December 3rd at the Good Shepherd Chapel.

You missed it? If you enjoy Jazz, that’s too bad, because this concert was fabulous!

Let’s begin with the setting:  The Good Shepherd Chapel at CUI.  It’s a gorgeous location.  From the adjoining patio, there’s a sweeping view of Orange County, all the way out to the mountains.  The Chapel itself is a jewel — an intimate club-like setting — ideal for a group of this size: eight instrumentalists and two vocalists.

Now to the important part of the evening, the music:  The program opened with an original work written by band member Anthony Lenzy, who plays electric bass.  It was sophisticated and rich in places.  Highlights included a moving rendition of “The Gentle Rain,” by Bonfa; an upbeat arrangement by Dr. Mueller of “What Child Is This”; a swinging rendition of “Mercy, Mercy, Mercy” by Joe Jawinul. And more, much more.

Notable solos included Adam Dougherty on piano, Anthony Lenzy on electric base, a great guitar riff by Nico Miguel, and a couple of strong riffs on saxophone by Andrew Parker (what a terrific last name for an aspiring saxophonist!).  A special acknowledgement goes out to Owen Duncan for doing the arrangement of “While You’re Here,” along with a strong solo on the trombone.

The two vocalists, Amanda Dienhart and Casey Proctor, had great range and reach. By reach, I mean voices that reached right into the hearts of audience members, starting with me.

Much to my delight, the ensemble brushed up “I Mean You” by Thelonius Monk.  He happens to be in my pantheon of jazz all-mighties ever since I discovered him back in 1963 (dates me, I know) when he was on the cover of Time Magazine.

The concert closed with a rousing  — even challenging — rendition of “Chromazone” by Mike Stern.

My wife and I left the event feeling better about…everything.

We plan to attend their next concert, which is scheduled for Monday, April 15th, beginning at 7:00 pm.  Mark your calendars and join us!

To learn about all of the programs offered by the Music Department at CUI, click here.