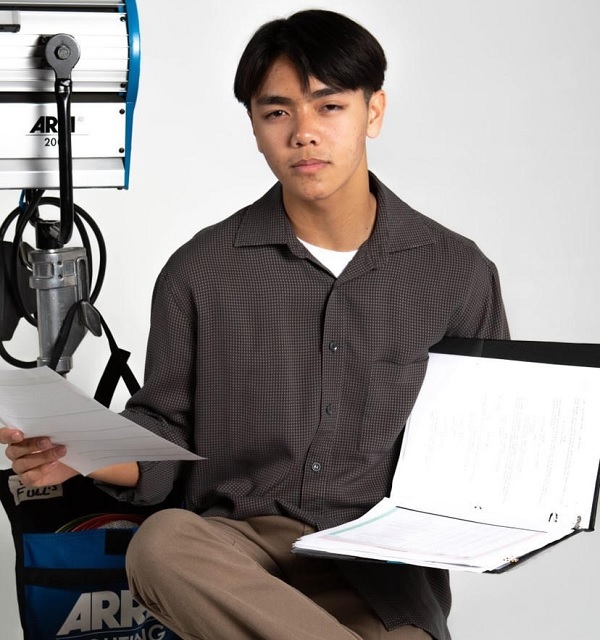 The OC Film Festival is an annual, one-night event showcasing work from high school filmmakers all over Orange County. Nominations were released about two weeks before the awards show on April 30th, and winners were announced during a virtual live event on May 15th. Usually, the organizers hand out plaques for each winning film, but since this year’s festival was a virtual show through a livestream, it may be possible that they are planning to deliver them to the winners’ homes.

“I entered the contest because I wanted to share a film that I was so proud of and put a lot of time and effort into it with as many people as I can. It’s also super exciting to not only participate in the festival but also win multiple awards for one of my favorite films,” Sanjongco said.

Sanjongco’s content creating background started when he was in the eighth grade as a hobby. Sanjongco would film and edit his own videos he took on family vacations or of random places he would visit. When Sanjongco entered high school, he joined the school’s filmmaking and broadcasting class called Warrior TV.

Every summer, FilmEd Academy of the Arts holds a two-week filmmaking workshop for students joining their school’s broadcasting class. At the end of each workshop, there is a project that the students are tasked to complete. This year, the task was making a music video.

“Because of the limited time we were given, we had to create a music video in three days, starting with pre-production, filming and editing. I created a storyboard and drew up each shot, and since I had to act in the video, my Warrior TV producer helped operate the camera for half of the shots. Filming took about two days and I edited for 12 hours,” Sanjongco said.

Through his music video, Sanjongco hopes to tell the story about losing loved ones and being left with the guilt from all of the mistakes and memories made.

“The story I wanted to tell through my music video was one that was very personal to me and it’s not something I like talking about, but [it] is something that I think a lot of people can relate to…I wasn’t really motivated by anything or anyone. Creating a music video and telling my story was sort of my way of venting. At the time, I didn’t have anyone that I could talk to about what I was going through, so making that video was therapeutic in a way,” Sanjongco said.

“In order to prepare for filming I had to plan outfits and coordinate meet-up locations with Jake. He was very professional throughout the whole process and made sure everything was planned out well,” Cooper said.

The music video was shot at different locations including San Clemente Beach, in the car, at Cooper’s house and on a hill behind Cooper’s house. Sanjongco and Cooper were able to showcase their individual talents through this music video and both are proud of their accomplishments.

“The video was honestly such a fun way to spend part of my summer and Jake is such a sweet and genuine person. I am so happy to have been a part of it and I am so proud of him and his work,” Cooper said.

After joining Warrior TV, Sanjongco developed a deep interest in pursuing his hobby further into the future. He hopes to continue to create content and work towards bettering his filmmaking skills.

“My biggest goal for my future is to go to the University of Southern California (USC) and join their film program. I hope to continue doing freelance filmmaking or creating documentaries for things like Netflix,” Sanjongco said.

Leisa Komyo
Leisa Komyo is a student at the University of California, Irvine. She is currently a Literary Journalism major and hopes to work in the media broadcasting field in the future as a news anchor.

While attending Woodbridge High School, Leisa was on her school’s news publication and media broadcasting team. Her goal as a journalist is to deliver truthful, reliable news to her readers.