What’s The Matter With Irvine?

In December 2015, the same month as the Paris climate talks, the City of San Diego gained national and international recognition for passing its legally binding Climate Action Plan (CAP).  Among other strategies to reduce greenhouse gas (GHG) emissions — and thereby mitigate the inevitable impacts of climate change — San Diego has committed to 100 percent clean electricity by the year 2035.

If San Diego, the eighth largest city in the United States, can accomplish this, what’s the matter with Irvine?  Irvine was incorporated in 1971 with a Master Plan that featured residential villages, preservation of green spaces, and quality-of-life for residents.  In the 1990s, the city was the first in the nation to protect the ozone layer by banning chlorofluorocarbons (CFCs) in compliance with the Kyoto Protocol.  Over the past five years, though, it seems the City has lost its way.

Irvine is currently updating its General Plan, which envisions a “build-out” population of about 330,000.  The plan, as clearly required by law, will include the customary Environmental Impact Report (EIR), most likely tucked conveniently into an appendix.  This is twentieth-century thinking.

There is still time for Irvine to develop a bold Climate Action Plan like San Diego’s.  The California Environmental Quality Act (CEQA) requires that GHG mitigation targets be measurable, enforceable, and include deadlines.  Several recent court decisions have upheld this requirement.  According to Nicole Capretz, environmental attorney and primary author of San Diego’s CAP, the ideal time for cities to develop a CAP is while they are engaged in their General Plan Update.  A CAP offers the best way to comply with California’s GHG reduction goals under State law, because it is integrated and aligned with growth and development plans.  Ms. Capretz’s nonprofit Climate Action Campaign, and grassroots group Orange County for Climate Action, sent a letter to City staff and then-Mayor Stephen Choi in September 2016, urging the City of Irvine to do exactly that.  There was no response.

Why is Irvine resisting development of a CAP?  Perhaps they buy into the false narrative that addressing global climate change is a drain on the economy, or a “job-killer.”  Perhaps the businesses which fund Council members’ political campaigns, out of shortsighted self-interest, simply prefer continuation of the status quo. 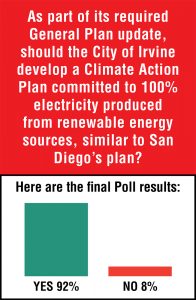 But there is a different narrative regarding Climate Action Plans.  San Diego’s Mayor Kevin Faulconer, a Republican, writes in his introduction to San Diego’s CAP, “San Diego is a leader in innovation and sustainability.  By striking a sensible balance between protecting our environment and growing our economy, San Diego can support clean technology, renewable energy, and economic growth (emphasis added).”  Mayor Faulconer goes on to highlight:  creating green jobs, such as manufacture a

nd installation of solar panels; increased choice and local control over the City’s sources of water and energy, including a shift to 100 percent renewable electricity; improved public health from clean air and water; reduced landfill waste; fossil-free alternatives to car-based transportation; and enhanced quality of life.  What’s not to like?

Irvine seems to be mired in obsolete thinking.  They fail to see that taking action against climate change can go hand-in-hand with overall economic growth and better quality of life for all citizens.  At the State level, California’s leaders understand this.  If city governments fail to proactively get on board, eventually — and soon — they will be forced to.

Roger Gloss
Roger Gloss earned a B.S. in Physics from UCLA and is now retired from a career in information technology. He is a citizen- activist against climate change, animal agriculture, and systemic environmental destruction. He has lived in Orange County since 1970 with his wife Linda.

His 2014 novel, Third Wind, is a pre-apocalyptic story of runaway climate change and failed government. His most recent book, If Pigs Could Talk: The Case for a Plant-Based Diet, is a scathing indictment of factory farming.