Veterans Corner: On Behalf of Our Brothers & Sisters in Arms 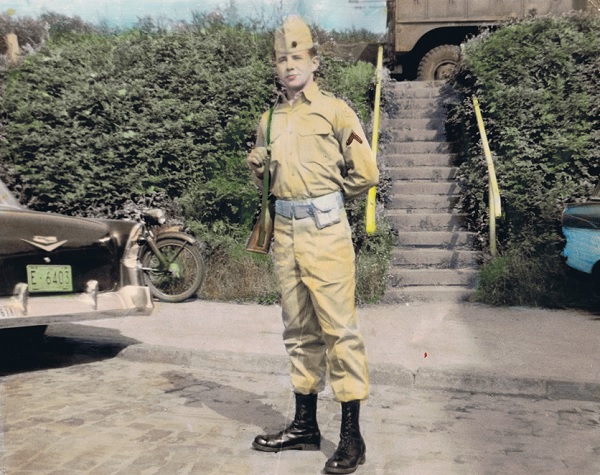 Photo of Ray during boot camp in 1956

My name is Raymond Cordova and I am proud to have served our nation with the 82nd Airborne Division/504th Parachute Infantry Regiment as a communications technician attached to the 32nd Signal Battalion, headquartered in Darmstadt, Germany.

I am deeply disturbed that four of Irvine’s Council members, beginning with Mayor Farrah Khan followed by Anthony Kuo, Mike Carroll and Tammy Kim, disrespect our veterans with their empty promises. On a personal note, I never want to hear them say: “Thank you for your service.” I reference their false promise to make certain the 125-acre ARDA site at the Great Park would be for the Veterans Memorial Park and Cemetery. How dare they now commit to a paltry 5 acres towards a “veterans memorial component” and 120 acres to grow flowers!

I have five World War II uncles interred at Fort Logan Memorial Cemetery in Denver, Colorado. Two weeks ago, my youngest uncle Alfredo DeHerrera, a Korean War veteran, passed at age 93 and now joins his five older brothers. I have five younger brothers who followed me into the military and all honorably served our country. Our mother went to the train station six times to see us off; by His Grace, we all came home alive from our overseas deployments.

Upon my return from ‘Nam, I was sent to Fort Lewis Washington and was given permission to enroll at Washington State University. It was there I met my bride of 62 years. We came to California and we were adopted by this great state.

I will be the only Cordova who will not be interred at Fort Logan, and now realize that unless there is a veterans cemetery at the ARDA site, my only option will be cremation and to be buried at sea. This is the only choice as there is apparently no room for me and my Brothers in Arms at the ARDA site because the Mayor and three Council members now believe that smelling flowers in their “botanical garden” is more important.

Over the years, I have made it a point to personally visit many overseas military cemeteries. There was always an abundance of visitors. Every site I visited, I always left with a full heart and felt gratitude for those overseas communities that have honored our nation’s military history and provided a final resting place for American veterans.

Luxembourg American Cemetery and Memorial
Before he died, General George S. Patton (3rd Army) stated he wanted to be interred with his troops and he is the only General to be buried with his men in Luxembourg a Second World War American military war grave cemetery, located in Hamm, Luxembourg City, Luxembourg. The cemetery, containing 5,074 American war dead, covers 50.5 acres.

Korean War UN Memorial/Cemetery in Busan
It contains 2,300 graves and is the only United Nations cemetery in the world. Laid out over 35 acres, the graves are set out in 22 sites designated by the nationalities of the buried service members. The cemetery is located at 93, UN Pyeonghwa-ro, Nam-gu.

Normandy American Cemetery and Memorial
The Normandy American Cemetery and Memorial in France is located in Colleville-sur-Mer, on the site of the temporary American St. Laurent Cemetery, established by the U.S. First Army on June 8, 1944 as the first American cemetery on European soil in World War II. The cemetery site, at the north end of its half mile access road, covers 172.5 acres and contains the graves of 9,386 of our military dead.

Raymond Cordova
Raymond Cordova was born in New Mexico but spent most of his youth in Denver, Colorado. In 1956, Ray enlisted in the U.S. Army where he went to Jump School with the 82nd Airborne before serving with the 504th Parachute Infantry Regiment until 1960. After his military service, Ray planted roots in California with his wife of 62 years, Soon Ei. He holds an MBA from Cal State Long Beach and spent several decades advocating for the rights of working men and women as a labor representative. Ray currently serves as Chair of South County Labor.