Trashing Irvine and Irvine Veterans… How Low Can You Go, FivePoint?

Beginning a few weeks ago, two related things happened. First, developer FivePoint donated $600,000 — an astounding amount of money — to their YES on B campaign. And, second, YES on B political signs began appearing on major Irvine streets.

So, funded by developer FivePoint, hundreds of YES on B signs were planted along our streets and parkways — as many as five on a corner and 20 at an intersection! Is that kind of excessive politicking legal? Yes. Is it an abusive trashing of public space? Also, yes.

Now, examine what these signs say: “Real Veterans Support YES on B.” Think about that for a minute. So, if you’re a veteran who is voting NO on Measure B, you’re not a real veteran? I’m a real veteran, and thousands of other Irvine veterans who oppose Measure B are real veterans, too. In fact, hundreds of us worked our tails off to force the City Council to put Measure B on the ballot. That way, we and the whole Irvine community could vote NO, and overturn the City Council and FivePoint scheme to move our long-promised Veterans Cemetery in the Great Park down to FivePoint’s noisy, unacceptable freeway site. Moreover, our NO vote would stop the giveaway of 125 acres of our Great Park to FivePoint for more of their greedy overdevelopment.

Last October and November, hundreds of us gathered 19,000 Irvine resident signatures to put this issue on the June 5th ballot for a vote. Now, look at the picture below, taken when we submitted our referendum petition signatures. Here we are…veterans from World War II, Korea, Vietnam, the Gulf War, Afghanistan and Iraq, along with our family members. Some of us are highly decorated. We all served honorably. Like others in Orange County, Irvine veterans gave years of their lives; some even suffered grievous wounds.

Memo to FivePoint: We are all REAL veterans! We are REAL veterans who want our Veterans Memorial Park and Cemetery in the Great Park, as originally planned. We don’t want it to be located at your noisy, disrespectful freeway site alongside the El Toro “Y”. Shame on you, FivePoint. Had you any honor or respect for Irvine veterans and our service, you would remove those signs right now, and apologize to the entire Irvine community. 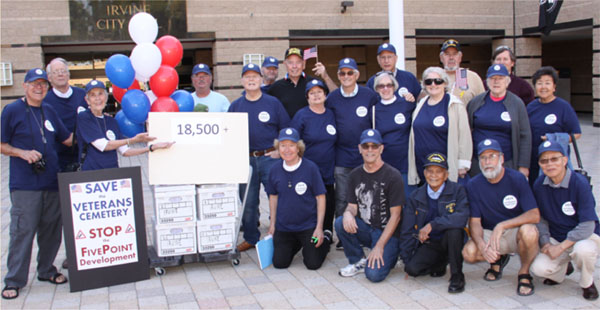 Angelo Vassos (far left, in photo), is a 52-year Irvine resident and an ICNV photojournalist. He served in the U.S. Air Force, 1950-1954. He is a retired high school teacher.