ICNV is pleased to publish this second in a series on climate change.  The first article illustrated how Irvine’s past activism on an issue of global importance — destruction of the atmosphere’s ozone layer — helped provoke a solution adopted worldwide.  Roger Gloss, the author of this, our second article, would welcome any comments at Editor@IrvineCommunityNews.org.

Global climate change seems overwhelming.  As ordinary citizens we may feel powerless to do anything about it.  So, “think globally, act locally” is an important mindset if we are to make a difference.  We can have significant impact on our local officials, showing them that their constituents understand the climate crisis is real and that strong governmental measures are needed to protect our planet.

So let’s frame the issue with these statements as premises:  First, Climate change is real and caused by human industrial activity.  Second, the potential effects of global warming are devastating over the long term to our accustomed way of life.  Third, we have a narrow window of time — possibly as little as 10 or 20 years — in which to transform our global economy in order to arrest serious damage to human populations as well as to all forms of biodiversity across the globe.

Those who reject these premises or wish to debate them might choose to read no further.  The remainder of this article is a status report of current actions being taken against climate change at the global, national, state, and local levels.

The 2015 Paris Climate Agreement among 195 nations, and the subsequent greenhouse gas (GHG) reduction commitments of most of those nations, represents a milestone at the global level.  Previous talks held by the Intergovernmental Panel on Climate Change (IPCC) had failed to produce any consensus or agreement.  The Paris talks were the first to achieve global recognition of the climate crisis and the need for all nations to take significant collective action.

That is the good news.  The bad news is that the goal of limiting average global temperature increase to two degrees Celsius by the year 2100 (with an “aspiration” of 1.5 degrees) is insufficient to ward off serious damage across the globe.  In addition, the commitments made by signatory nations so far — including commitments by the U.S. under the Obama administration — are not sufficient to achieve the goal of two degrees.  Finally, the commitments are non-binding, and no formal monitoring or enforcement mechanism has been put in place. 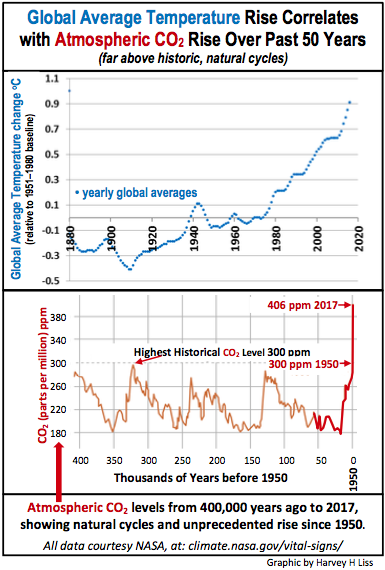 The national outlook has been dealt a serious setback by the new Trump administration.  President Trump appears bent on reversing nearly every climate and environmental policy of the Obama administration; by suspending the Clean Power Plan; “bringing back coal jobs;” green-lighting the Keystone XL and Dakota Access pipelines; defunding and de-staffing the Environmental Protection Agency (EPA); and challenging Obama’s proposed fuel economy standards.  Then, on June 1, mere days after the first article in this series went to press, Trump signaled U.S. withdrawal from the 2015 Paris Climate Agreement.

Meanwhile our own state — the sixth largest economy in the world — continues to provide global leadership in climate action.  Most significantly, SB 32, passed by the legislature and signed by Governor Jerry Brown in September 2016, commits the state to 40 percent GHG reduction below 1990 levels by the year 2030.

And while Trump has sent exactly the wrong signal to the rest of the world regarding the U.S. commitment to deal with the climate crisis, Governor Brown has since formed the U.S. Climate Alliance with Governors Andrew Cuomo and Jay Inslee, committing California, New York, and Washington to uphold the Paris Agreement.  Other states are encouraged to join the alliance, and 10 recently have done so.

At the city level, Los Angeles Mayor Eric Garcetti, co-founder of the Mayors National Climate Action Agenda, issued a statement, now signed by more than 300 mayors, pledging to honor the Paris Agreement.  Regrettably, Irvine Mayor Donald Wagner is not one of them.

San Diego’s ground-breaking, legally binding Climate Action Plan of December 2015 — committing the nation’s eighth largest city to 100 percent electricity produced from renewable energy sources by 2035 — provides a model for Orange County cities.  Irvine, in particular, is currently engaged in a comprehensive update of its General Plan, and should be strongly encouraged to develop an Irvine Climate Action Plan that is integrated with the City’s General Plan and complies with State goals under SB 32. 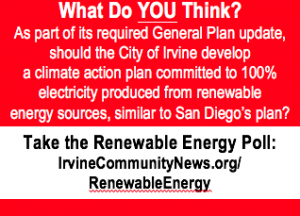 There are real and important possibilities at the local level; however, very little work of this sort has been done so far in the 34 cities in Orange County, including Irvine.  As citizens, we can start taking action right here in Irvine by calling or writing to our City Council (see below), and please take our poll.

Roger Gloss
Roger Gloss earned a B.S. in Physics from UCLA and is now retired from a career in information technology. He is a citizen- activist against climate change, animal agriculture, and systemic environmental destruction. He has lived in Orange County since 1970 with his wife Linda.

His 2014 novel, Third Wind, is a pre-apocalyptic story of runaway climate change and failed government. His most recent book, If Pigs Could Talk: The Case for a Plant-Based Diet, is a scathing indictment of factory farming.