Chezki Marks, a third-grader, found he had a lot of time on his hands at home since his school closed due to coronavirus precautions.  What to do?  No need to fret.

The Monday after public schools officially closed, his school, Irvine Hebrew Day School (IHDS), was already on task, delivering school kits to their kindergarten-through-sixth-graders with everything they’d need — Chromebooks, textbooks, workbooks, art and craft supplies, math tools, a photo collage of classroom wall charts and, of course, a squeezy-brain stress ball, and their prayer books.  No one skipped a beat.

With online help from his art, language and Hebrew teachers, Chezki decided to use his daily “educational exploration time,” (i.e., play time) writing a story for his three-year-old brother, first in English, then in Hebrew, and illustrating it with his own drawings.  “We build that in every day to their schedules,” said Tammy Keces, founding principal of the school.  Students get to do something they choose, such as write a story they love, play music, build something, create a game or even plan and help make meals for their families. 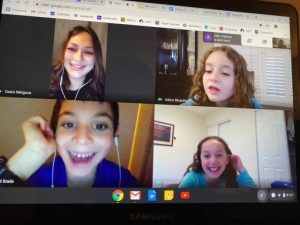 The process of switching to online learning, what she and her teachers coined “remote collaborative learning,” was seamless, Keces said, with collaborative being the key word.

The online classroom now in effect at most schools is an “imperfect” situation at best, said Alfie Kohn, author of several books on education, including The Schools Our Children Deserve.

“Online learning is a temporary necessity and can never take the place of inviting students to wrestle with ideas together,” Kohn said.  To wrestle the imperfect, Keces, nine teachers and a rabbi spent that first weekend detailing daily class schedules.  They send the day’s line-up to each of their students, outlining what they’re going to study and talk about.  The teachers meet online with their students as a class as well as individually.

The best way teachers can help students now is to listen to them, said Kohn.  “Teachers can make the best of an imperfect arrangement by shaping the lessons around students’ questions, by focusing more on deep understanding than on memorizing facts or practicing skills and by doing whatever they can to foster interaction among the learners,” he said.

Keces, who grew up and lives in Laguna Beach with her husband and three children, said everything that was done in the classroom by the students is now being done from home, “albeit in their pj’s.”

What she’s doing differently than other schools is keeping things as close to the regular hands-on classroom schedule as possible.  “We have a full-fledged school day,” she said.  One teacher even sent owl pellets in her study packet so she and her students could dissect them together over the screen.

“At my son’s high school,” Keces said, “he sees his teacher online maybe once during the day.”  Keces said her “office door” (email or text contact) is always open to parents, special-needs students are being attended to and the school psychologist is in.

“It’s not independent study,” she said.  “Teachers are giving the students suggestions and direction on how to accomplish this learning.  We’re not abandoning these families and their kids.  The parents are not home-schooling their children.  The kids are schooling themselves.”

Susan Berezovsky’s two boys, Jordan and Roni, are learning at home alongside her and her husband, who have to work from home now, too.  “We just have a big balancing act here,” she said.  “We’re not as productive as we normally are at the office.”

It’s not ideal in terms of class interaction, she agrees, but her sons are getting the hang of it.  Roni, a fourth-grader, is becoming the class go-to tech guy.  Jordan, a first-grader, started an after-school Zoom chat with his friends.

Keces emphasizes the traditional progressive approach her school takes toward collaborative learning, a process Kohn has extensively researched.  “It is much harder to do this — let alone to do it collaboratively — when students are separated and looking at screens,” Kohn said.  “Interdependence counts at least as much as independence, so it follows that practices that pit students against one another in some kind of competition, thereby undermining a feeling of community, are deliberately avoided.”  Learning is not passively absorbed information while trying not to fall asleep but the in-person activity it takes to make it meaningful, he said.

With online learning extended through this fall and winter, stay-at-home mom Megan Bar-lev is juggling an tri-grade classroom with three sons, all one year apart. “Social engagement is not a problem,” she said.  She’s impressed by the organized, scheduled daily plans complete with all the necessary links from her sons’ school.  “I don’t think they’re falling behind at all academically,” she said. 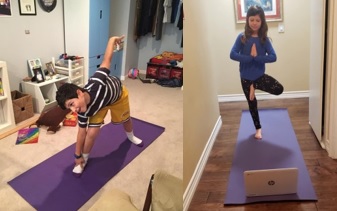 “Our students are excited to wake up every day and go to remote school because they still feel engaged and they’re learning,” Keces said. “I just had a lunch-bunch meeting with some students on Zoom.  We ate lunch together.  I led a Tuesday Smoozeday with the parents so they could talk to me.  The Rabbi is giving Torah study.  Our Hebrew teacher is doing yoga with the parents and the kids together.”

Keces said her students were taught the skills of being independent so they’re now more capable of navigating this change at home, she said.  “Our model of real life skills is showing up when they’re needed most,” she said.  “The kids just don’t want to be left alone right now.  They want something to do.  They’re feeling successful with this transition.”

Ari Bar-lev, Mom Megan’s first-grader says, “I miss hugging my teacher and actually seeing her and not on the computer.”

Rita Robinson
Guest contributor Rita Robinson is a writer, editor and environmentalist who believes in and practices world peace through individual happiness.