Plight of the UCI Bobcat 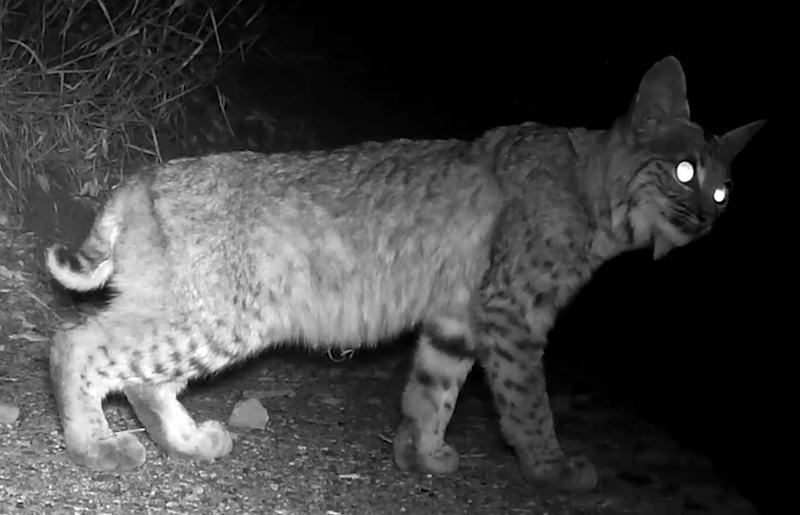 Photo of bobcat taken from a trail camera placed by the author. The bobcat has a short tail, pointed ears and a “beard” that hangs down on both sides of its cheeks. They never attack humans, although they will do a job on small pets, and are active at night, early morning or late evening. The bobcat is also about 1.5 to 2 times larger than the typical domestic cat.

The Shawnee Indians tell a story about a bobcat who trapped a hare. The hare tells the bobcat to build a fire to prepare her rabbit-meat meal. Soon, a fire is blazing away next to the trapped hare. The hot ashes fly and ignite the bobcat’s fur leaving dark spots on its body. Meanwhile, the rabbit escapes and the beautiful beast is still hungry.

Bobcats are common in wilderness areas of Orange County and on occasion may be found moving through adjacent residential regions. Sprawling urban development has fragmented their habitat and in some of the fragments they can no longer be found.

A recent study conducted by Sinem Kargin, a graduate student at UC Irvine, found that bobcats are undetected by wildlife cameras in the same UCI open space locations where they were discovered 5 years ago.

Dr. Megan Lulow and Julie Coffey, both with UCI Nature, which is a sponsor of Ms. Kargin’s work, have noted that passages set aside for wildlife movement between habitat blocks are compromised by road under-crossings that are unsuitable for this species.

Many crossings are blocked with fencing or stagnant water as shown in the photos displayed below:

Under-crossings intended for animals are often blocked by fencing (left) and water (right).

Assessments of the wildlife crossings suggest that improvements are necessary to increase the likelihood bobcats will utilize them instead of taking their chances by crossing roads. The most common causes of their demise are roadkill and parasitic infections resulting from ingestion of anticoagulant rodenticides.

Lulow recommends the development of a crossing-enhancement plan to identify what improvements would optimize feasibility and use by bobcats and other wildlife moving between blocks of coastal habitat. She asks that people report the location and send photographs to nature.uci.edu, of any bobcat sightings in the Orange County coastal area.

Imagine that you and your family had to live in a world that only included the three acres that surround your home. Let’s say your world was bordered by deadly rivers whose currents could be crossed only by the bravest, the cleverest and the strongest, and was inhabited by giants who sometimes placed tempting black boxes full of anticoagulant-poisoned bait in corners and alleys.

If you gave into temptations and tasted this vile stuff, you might die a horrid death. The anticoagulant blood levels in your usual rodent prey would weaken your immune system and make you vulnerable to deadly parasitic infections.

You would wander to the edges of your small domain and gaze out over the impenetrable treacherous torrent of Michelson Drive and Campus and Jamboree Road to the shining villages on the other side but to try to cross would mean almost certain roadkill.

We share Orange County with these bashful and handsome creatures. Shouldn’t we be respecting and loving them like we respect and love our domestic cats? We must do all we can to protect them and extend their habitat.

“Every creature was designed to serve a purpose. Learn from animals for they are there to teach you the way of life.” ― Suzy Kassem, Rise Up and Salute the Sun: The Writings of Suzy Kassem 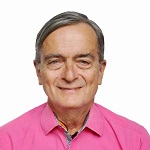 Dr. Robert Detrano
Robert Detrano is a retired UCI cardiologist who has recently returned from charity work in Yunnan Province, China and now lives in a cottage in Silverado Canyon. Robert has fallen in love with his wild neighbors and is working to protect them and their habitat.