Andrew Tonkovich and Lisa Alvarez are co-editors of a remarkable anthology, which they have entitled, ORANGE COUNTY: A Literary Field Guide.  Tonkovich edits the West Coast literary journal Santa Monica Review and hosts Bibliocracy Radio, a weekly books show on KPFK (90.7 FM).  He teaches writing at UC Irvine, where he is the president of the union representing librarians and lecturers.  His wife and co-editor, Lisa Alvarez, is a teacher at Irvine Valley College.

For the benefit of ICNV readers, we asked Andrew Tonkovich to prepare a brief description of ORANGE COUNTY: A Literary Field Guide.  We are pleased to present it here.

After working and living in Orange County for two decades, my wife and co-editor Lisa Alvarez and I found ourselves not only challenging the too-easy stereotypes about our adopted home, but boostering just a bit — especially when it came to the art and writing that OC has inspired.

As writers and teachers, we were nonetheless surprised at the size of our home library of must-own OC histories and field guides, local self-published appreciations, and overlooked or forgotten classics.  In conversation with both locals and visitors, we increasingly referenced texts which, we imagined, spoke persuasively about important elements of the OC story, whether the 1936 Citrus Wars, Disneyland as a cultural phenomenon, development of the Irvine Ranch or the area’s place and portrayal in the popular imagination, as in the fiction of novelists Jessamyn West and E.L. Doctorow, titans of American literature.

Each of these themes have been considered, by novelists and short story writers, poets and memoirists, beginning with early explorers and “pioneers” and extending to contemporary works of protest, satire, insight and celebration.  After further reading, research and making some difficult choices, we hope both newbies and longtime residents will appreciate the literary panorama we’ve offered in a new anthology featuring some of the best, representative, challenging if also often affirming writing from and about OC.

Published by Heyday, Orange County:  A Literary Field Guide is a small if potentially startling collection of writing about the County gathered in one place, in what we believe is the region’s first-ever literary anthology.

Our book is a one hundred and fifty-year survey of fiction and nonfiction by visitors and residents, from established and renowned authors to the less well-known.  Trying to cover the County’s rich and complicated history, culture, landmarks and people was tough. So much had to be left out.

But, for now, we’re pleased to include among sixty pieces a short story by the young M.F.K. Fisher on Laguna Beach, poetry from Pulitzer Prize-winner Yusef Komunyakaa, excerpts from comedian-actor-playwright Steve Martin, historical reflection by Joan Didion, autobiography from Santa Ana police officer Mona Ruiz and verse by activist-scholar Mitsuye Yamada, just to brag about the volume’s table of contents. 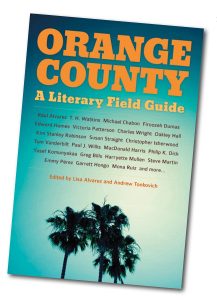 We’ve organized literary pieces as a “field guide,” with writing about the hills, coast, and valley in-between, and featuring an array of voices on landmark topics (and places) from the Santa Ana River to The Magic Kingdom and Nixon Library, Seal Beach to Modjeska Canyon.  With stories and recollections from newcomers (as, for example, Madame Modjeska’s friend and Nobel Prize-winner Henryk (Quo Vadis) Sienkiewicz and her one-time groundskeeper and native plants expert Theodore Payne) to 60s-era reminiscences of development (by longtime OC chronicler Jim Washburn) and wild counter-cultural investigation by journalist Nick Schou, there’s something by and for nearly everybody.

We include stories of workers, immigrants, the natural world and countless lost histories in-between.  We hope this collection fills a need for both celebration and critical evaluation of the stories of Orange County, as told by diverse, forgotten or unheard voices.  We have provided both a modest corrective and recommended reading list. We call attention to must-read established writers such as Oakley Hall of Warlock fame and surf noir inventor Kem Nunn and his Tapping the Source. There is also funny, urgent and revelatory newer work from instant favorites, including esteemed younger writers Emmy Pérez, Kristen Leigh Schwarz and Peggy Hesketh, whose Telling the Bees portrays intersecting lives in old Anaheim.

Indeed, we hope this field guide will tell the stories of many lives, lived and imagined.