Guest Article: Do Emissions from Nuclear Power Plants Cause Cancer? 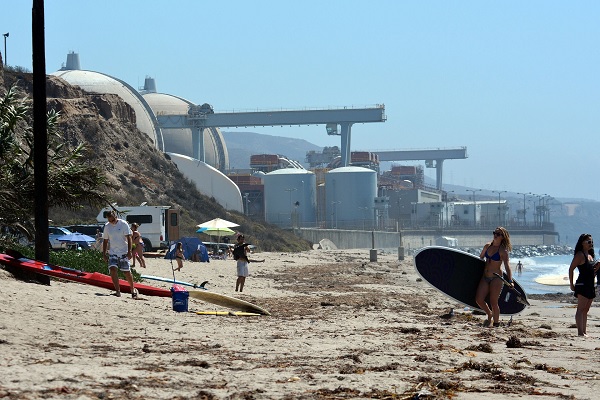 While we agonize over the COVID-19 pandemic, perhaps it is also appropriate to consider another medical enigma which kills far more.  Cancer is the number one killer in California.  This year, cancer deaths are expected to exceed 60,000 in California and 600,000 nationwide.  Radioactive discharges from nuclear power plants are viewed by many as a contributing factor.  Over 100 million Americans live within 50 miles of a nuclear power plant.

Our very own San Onofre has been regularly releasing low-level radiation into the ocean and atmosphere for more than a half-century.  Although it is listed as “low-level,” the destructive biological effects of radiation are cumulative.  According to the Nuclear Regulatory Commission, even small doses of ionizing radiation increase risks to humans.  Air ejectors blast dozens of radionuclides into the prevailing winds which generally blow over the populated cities of Orange County.  Giant pipes that are 18 feet in diameter discharge liquid releases into the ocean, up to a million gallons per minute.  Radionuclides are mixed with sea water in discharges that can go on for more than a day.  The theory is simple: The solution to pollution is dilution.

Unfortunately for us, this radioactivity is a protected pollutant.  While the Nuclear Regulatory Commission says radioactive waste is permissible, it is careful not to say that it is safe.  The concentrations which are discharged are governed by a motivational standard known as ALARA which means “As Low As Reasonably Achievable.”  Permissible levels are based on healthy young adult males even though it is well known that women and children are much more vulnerable to the damaging effects on cell DNA.  The human fetus is about 50 times more vulnerable.

It gets worse.  These releases have been conducted in secret with no advance public warning.  Instead, the Nuclear Regulatory Commission buries the data deep in its records the following year.  With a lot of digging, you can find quarterly averages but you can never find the date or concentrations of any particular release.

Recently, this policy changed when Southern California Edison quietly agreed to disclose releases 48 hours in advance.  Many were alarmed to learn of a planned release just two days before this past Memorial Day holiday weekend.  God forbid that anyone went near the ocean over the weekend!  Appeals were made to postpone the releases but Edison refused.

Do these emissions increase cancer risk?  The shocking answer is that no one knows for sure, mainly because of lack of research.  The public would like to know more but nuclear industry wants to know less.  The Nuclear Regulatory Commission likes to cite a heavily flawed study from 30 years ago which failed to find an answer.  It studied only where people died, not where they lived or worked.  It also failed to study cancer in children, the most vulnerable group.  More recently, scientific studies in Europe have reported an increase in cancer risks, especially in children.

In response to pressure for new research, the Nuclear Regulatory Commission spent 5 years issuing two reports which studied whether to study the problem.  A lengthy 412-page report from the prestigious National Academy of Sciences concluded that research should be done.  Another report provided a research proposal which singled out San Onofre and five other nuclear power plants for study.  It would have examined the cancer registries of everyone living within 50 km of San Onofre.  That is roughly a radius from Huntington Beach, out to Temecula, and down to Del Mar in San Diego County.  The Nuclear Regulatory Commission sat on this proposal for 10 months and then terminated the entire project just as it was about to begin.  This is not surprising since the Nuclear Regulatory Commission is the poster child for a captured regulatory agency.  It is funded by and operates for the benefit of the very industry it is supposed to regulate.

A new effort is being mounted to restart this research.  A petition is now circulating, which requests that Congress fund this research.  If you would like more information about the petition, the petition sponsors, and links to the National Academy of Sciences report entitled Analysis of Cancer Risks in Populations Near Nuclear Facilities, click here.  You can add your name to the petition by simply providing your name and city of residence.

Yes, San Onofre is now closed but its 1,773 tons (not pounds) of highly radioactive spent plutonium and uranium will remain in our backyard for the indefinite future.  It is called “spent” fuel because its profitability is spent.  Some of the radioactivity will remain lethal for millions of years.  It has taken a long time, but our country is finally learning that nuclear power is by far the most expensive, the most unreliable, the most dangerous, and the most environmentally destructive form of energy production.

Roger Johnson
Roger Johnson is a neuroscientist who graduated from Swarthmore College and received his PhD from the University of Connecticut. He served on the faculty of Amherst College, Tufts University, and was a founding faculty member at Ramapo College of New Jersey. He was a Fulbright Fellow and Guggenheim Scholar and is now a retired Professor Emeritus living in San Clemente.