As the principal staff photographer for Irvine Community News & Views (ICNV), I was assigned to get some good photographs of the April 4th City Council meeting at City Hall.  The big issue on the meeting agenda was Councilman Jeff Lalloway’s proposal to commit up to $40 million from the $300 million Great Park development fund in order to expedite construction of the 125-acre Veterans Memorial Park and Cemetery in the Great Park.

As a veteran myself, I had planned to attend the meeting anyway to testify in favor of the State and Federally-approved Veterans Cemetery, which I did.

As the hearing on the Veterans Cemetery wore on, I noticed something peculiar about the behavior of the Mayor and other Councilmembers at the dais — they seemed to be more interested in receiving and sending text messages than in paying attention to the many citizens who came to the meeting and testified. 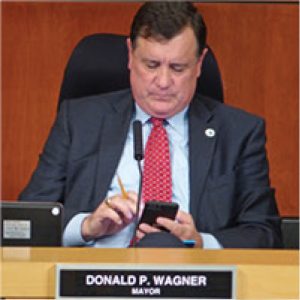 Here is something else I noticed:  Mayor Donald Wagner and two Councilmembers — Christina Shea and Melissa Fox — seemed to be furiously text-messaging with certain people in the audience, including Patrick Strader, who is the chief political operative and lobbyist for FivePoint Communities, the development company that has been trying to derail the Veterans Cemetery at the Great Park.  (This is the same company, under the leadership of its president and CEO, Emile Haddad, that organized and bankrolled a $1.5 million campaign in 2016 to smear other candidates and elect Don Wagner mayor and re-elect Councilwoman Christina Shea.)

As for Councilmember Melissa Fox, at a critical point in the meeting, she was obviously so mixed up and distracted by all the texting that she first voted for the Lalloway $40 million Great Park Veterans Cemetery proposal, which passed 3-to-2 (Wagner and Shea voted NO) but then, moments later, she asked to “reconsider” her vote.  Apparently, she was receiving text messages with instructions to present a new motion that included direction to City staff to also explore a “second track” for the Veterans Cemetery — a complicated “land-swap” scheme with developer FivePoint Communities.  The “land-swap” scheme, pushed by Councilmember Christina Shea and Mayor Donald Wagner, would move the Veterans Cemetery out of the Great Park and give FivePoint new entitlement for development.   This could include as many as 2,000 additional houses on what is now the City-owned 125 acres of land in the Great Park, designated in 2014 for a Veterans Cemetery.

The new Fox motion appeared to be offered at the behest of FivePoint Communities.  Fox’s “second track” motion was labeled a “poison pill” by Councilmember Jeff Lalloway, who said that it could jeopardize State and Federal funding for the Veterans Cemetery.  Fox’s motion passed, 3-to-2;  Councilmembers Jeff Lalloway and Lynn Schott voted NO.

Many who favored the 125-acre Veterans Memorial Park and Cemetery in the Great Park left the City Council meeting angry and disgusted.  Public hearings are for the benefit of the public in our local democracy.  The idea is that we all listen to one another at the same time, in full public view, and then there is a public vote.  But, instead, what is going on now is incessant text-messaging between Councilmembers.  This may be a violation of California’s Brown Act, the State “open meetings” law that bars Councilmembers from secretly orchestrating or rigging the outcome of a public vote on a City Council agen 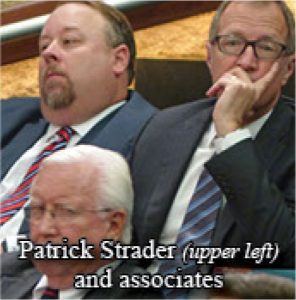 Also, it appears that the Mayor and Councilmembers — during a City Council hearing — are getting secret, texted instructions from lobbyists and others telling them what to do.  To me and to many Irvine citizens, Wagner, Shea and Fox appeared to be shills for developer FivePoint Communities and their chief political operative at the meeting, Patrick Strader.

I hope we’re going to get the full story of what really happened at the April 4th City Council meeting.  I was happy to learn some days after the meeting that Dr. Harvey Liss, an Irvine citizen-activist and ICNV investigative journalist who was also present at the meeting, has submitted an official, written Public Records Act request — requesting a printed record of all the text messages sent and received by Mayor Wagner and City Councilmembers Christina Shea and Melissa Fox during the 4-hour City Council hearing on the Veterans Cemetery issue.

Let’s see what Dr. Liss learns in the weeks ahead — I hope and trust that whatever it is, he will share it with the public.